Ron Sider and the Fate of the Evangelical Left

In the wake of the Chicago Declaration, the evangelical left seemed to be flying high. The national press began to take note of the movement’s growing numbers, proliferating literature, and political activism. Sojourners associate editor Jim Stentzel, voicing the feistiness of an evangelical left on the move, declared, “If the connection between the Bible and the nation’s alienation is made, things will start popping. Fifty million ‘born-again’ Christians could be one hell of a political force.” Ahead of the Moral Majority, Stentzel’s words betrayed not a trace of irony. In the mid-1970s evangelical politics looked as if it was up for grabs.

In the end, the evangelical left was swamped by the religious right. My book Moral Minority: The Evangelical Left in an Age of Conservatism explains why. The reasons are complicated—having to do with internal fights over identity politics and an external realignment of electoral politics—but the narrative concerning the fate of its “consistent life ethic” does a lot of the explanatory work. Linking opposition to U.S. imperialism in Central America to a much larger agenda that also opposed patriarchy, nuclear proliferation, poverty, and abortion (a move they borrowed from American Catholics), the evangelical left staked its identity and future on this overarching concern for “life.”

“The energy of the pro-life movement must be removed from the ideological agenda of the New Right,” warned Sider’s co-belligerant Jim Wallis in late 1980 as passion grew in conservative evangelical circles against abortion. Instead, Wallis continued, the evangelical left should rally around the pro-life cause as a “threshold issue” that might soften evangelical conservatives and moderates into accepting other progressive causes.

Ron Sider, founder of Evangelicals for Social Action, argued that such a strategy was feasible. He pointed out in a 1981 memo to top evangelical leaders that a recent Gallup Poll showed that 20 percent of evangelicals were “left of center,” 37 percent were “right of center,” and 30 percent were centrist. If more than half of evangelicals were “non-right,” Sider asked, then why was the Moral Majority constructing the terms of evangelical politics? Not only was the Christian right’s agenda “not biblical enough,” it failed to represent evangelicalism as a whole. A political vacuum existed, wrote Sider, among evangelicals who hold to the Moral Majority’s “basic pro-life and pro-family concerns” but do not resonate with its positions on the nuclear arms race, poverty, wealth, and race.

Activism within the evangelical left soon began to reflect the new rhetoric. At a Sojourners-organized “Peace Pentecost” demonstration in May 1985, participants touched on all points of the consistent pro-life ethic. Featured speaker Ron Sider, who was just completing his book Completely Pro-Life with InterVarsity Press, rallied participants outside the White House. Carrying signs that read “Choose Life: All Life is Sacred,” protesters prayed against “the twisted priorities of a nation that reverses the biblical wisdom by busily beating plowshares into swords.”

Next they proceeded to the State Department to denounce an American “promotion of violence and terror” in Central America; then to the Soviet embassy, where they prayed for the people of Afghanistan, who have “been brutally invaded by another arrogant superpower”; then to the South African embassy to pray against apartheid; then to the Supreme Court, where they interceded for the victims of crime and for those on Death Row; and finally to the Department of Health and Human Services where they “prayed for the unborn and for an agenda of justice and compassion for women and children that will create alternatives to the desperate, painful choice of abortion.” The cumulative protests yielded 248 arrests and generated impressive media attention.

The new emphasis culminated in the formation of JustLife. This organization issued voter guides, contributed to twenty-two “life-friendly” Senate and House candidates in 1986, conducted petition drives, and publicized its endorsements of candidates in local newspapers across the nation.

JustLife also introduced eight pro-life legislative bills with provisions for informed consent, family consent, viability testing for women 20-months pregnant, no public support for abortions, coordination of services for pregnant women, parental leave from work, Medicaid for unborn children, and adoption subsidies. In 1988 the organization issued a glossy voter guide. In it, Billy Graham, Ron Sider, and Joseph Cardinal Bernardin, urged “aggressive negotiations” with the Soviet Union to end the nuclear arms race, governmental programs that “empower the poor to become self-sufficient,” and an end to abortion, except when necessary to save the life of the mother.

Evidence soon mounted, however, that the grand evangelical coalition would not materialize. By 1989 JustLife had not exceeded 6,000 members. Despite endorsing 56 candidates in 1990, JustLife contributed only $22,000 to their political campaigns. In 1993, after mustering only $6,000 in donations to candidates, the PAC folded, deeply in debt after an unsuccessful emergency fundraising campaign.

The evangelical left’s “consistent life” thrust failed because of the cultural and political realities of the 1980s. Both JustLife and the broader movement simply did not fit the hardening American political party structure. During the 1980s Stephen Monsma, a pro-life evangelical Democrat from Michigan, lost two political bids: one for the U.S. House of Representatives in 1984 and one for the Michigan Senate in 1985. In both cases, hostility from Democratic colleagues toward his pro-life stance on abortion (despite his reliable support of welfare measures and a tight race for party superiority in the State Senate) plagued Monsma’s campaign. The New York Times reported that Monsma’s opposition to state financing of abortions caused Democratic funds “to dry up” in election campaigns.

On the other side, Monsma had previously secured the endorsement of Michigan’s Right to Life organization, but many insiders loudly objected because it was in the interest of their cause to retain Republican control of the Senate. Monsma gave up and moved to California. Robert Casey of Pennsylvania, Tony Hall of Ohio, Don Bonker of Washington, Bill Nelson of Florida, and Bob Casey of Pennsylvania soldiered on, but these pro-life Democrats, like Monsma, were also targets of both Democratic and Republican activists.

By failing to conform to political orthodoxy, the evangelical left forfeited its chances for large-scale mobilization. By contrast, the religious right had successfully attached itself to a burgeoning conservative movement and the Republican Party. Groups like the Moral Majority quickly outpaced progressive evangelical alternatives. By 1990 the evangelical left had been left behind.

Ron Sider, who died in July after a long career of bucking partisan categories, quipped that “we called for social and political action, [and] we got eight years of Ronald Reagan.”

It only got worse. In the 2010s the Democratic Party surged to Sider’s left, and the Republican Party went Trumpy. To his horror, evangelicalism, with which he identified until his death in August, did too.

But Sider didn’t really despair. He remained a joyful Anabaptist warrior to the end. Indeed, there was a kind of symmetry to his life. Trained on an Ontario farm and in a plain church house to be suspicious of politics, he ended his life politically homeless. In the end, I think he was kind of ok with that. 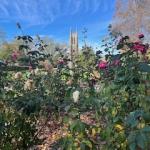 November 22, 2022
Words that Matter: An Excerpt from The Pastoral Care of Women in Late Medieval England
Next Post

November 24, 2022 Advent, and the End Times
Recent Comments
0 | Leave a Comment
"Impressive article. Provides the necessary perspective for entering into an informed discussion about the science/religion ..."
the old scribe Science, Religion, and Nineteenth Century Protestantism
"Very helpful! Thanks! It seems history has always been used as a weapon."
Roger McKinney Science, Religion, and Nineteenth Century Protestantism
"You have done nothing to refute my point. Certainly we should do the affirmative things ..."
NorrinRadd Ron Sider and the Fate of ..."
"When we try to prohibit behavior that many people consider, we simply drive the behavior ..."
Silverwolf13 Ron Sider and the Fate of ..."
Browse Our Archives
Related posts from Anxious Bench