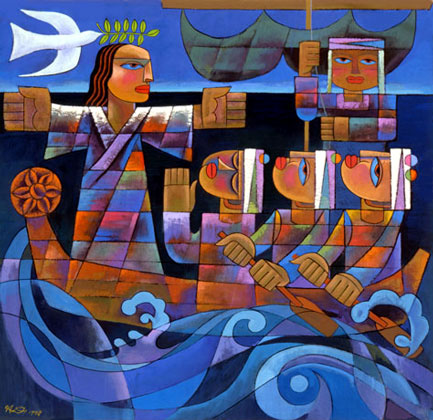 Was it because we couldn’t bear to look at fear that closely or that often, yet we wanted to know faith familiarly, that we keep them apart so much, in our seeking after God?

White knuckle fear:  it’s the stuff of action movies, not stories about faith.  We like stories where we beat fear, where we outsmart it, get the best of it. But white knuckle fear is the stuff of the nightly news, which likes to begin with blood and gore, because the data shows  we are drawn to that, because ratings go up when death is grisly and there are photos.

In the media, white knuckle fear is controlled.  The movie won’t be more than a couple hours long, and it will end reasonably well.  The news is meted out in minutes, and is unending:  the content will repeat daily, though the names will change, and cultural stories are never over, and often far away – the ISIS beheadings , are an example, casting an ominous shadow over our hearts and minds, yet occurring on distant shores, and on the far side of American military might and American counterintelligence, our protectors from these fears. 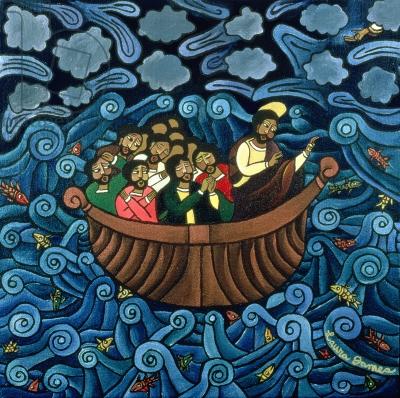 Our own experiences of white knuckle fear are different:  the grim diagnosis;  the travel disaster; the home foreclosure: these are not at a safe distance, or are they in timed installments followed by a break.

And this is  when faith moves beyond our common assumption that faith is a benediction that will keep us from harm.

Cowards die many times before their deaths, the valiant never taste of death but once, wrote William Shakespeare in Julius Caesar.  But the disciples, who were never craven and who took more risks than I do, died from fear a number of times during Jesus’ life, and perhaps a number more in their lives after his death.  One of those times was on the stormy sea of Galilee:

A great windstorm arose, and the waves beat into the boat, so that the boat was already being swamped. But he was in the stern, asleep on the cushion; and they woke him up and said to him, “Teacher, do you not care that we are perishing?” He woke up and rebuked the wind, and said to the sea, “Peace! Be still!” Then the wind ceased, and there was a dead calm. He said to them, “Why are you afraid? Have you still no faith?” Mark 4: 37-40 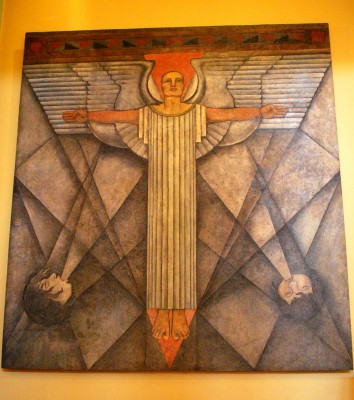 Faith,  here, is the antidote to fear.  It doesn’t prevent the conditions in which fear arises from occurring.  Faith did not provide them and their boat with a safe journey over the sea.  Faith is a way of walking through fear, without succumbing to its grip.  Fear draws us into rage, helplessness, desperation or despair.  Faith draws us to rise to the occasion in which we find ourselves, as steadfast voices for Peace, as creators of calm.  It must be such a spirit that allows Hindus to walk across beds of hot coals without burning their feet.  That allows mothers of children pinned under cars to lift those cars enough to free the child.  That allowed Thomas Cromwell, in the court of Henry the VIII, to operate calmly in the presence of an increasingly paranoid and frequently beheading king, using his influence to create religious freedoms for the people of England.  That allowed Nelson Mandela to endure 27 years of imprisonment, emerge the victor over the government that had so abused him, and become President of his nation.

It is my belief that neither the terror nor the triumph in these examples are the result of God’s plan, but that in all these instances, faith, in its strength,  created the atmosphere in which these possibilities could emerge. 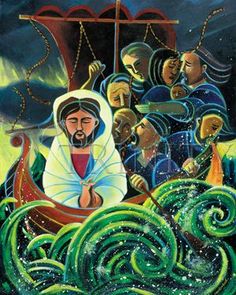 And to understand faith in these instances it is important not to label them miracles, for miracles are not the work of the people to whom they occur, and faith is a great work indeed.  Neither is faith, in this or any situation, a reassurance that all will be well.  We might want to say it was a miracle Jesus had such faith.  But since he urges us also to have faith, he is not understanding this event as miraculous, which would make it unique and unrepeatable.  For Jesus, the storm created by Herod and Pilate could not be calmed, the wind in this storm would howl until the hour of his death, and even his prayers could not end its siege.  But this did not diminish his faith, even though he longed for a different ending.

So faith is not succeeding against all obstacles, faith is a way of dying – and also a way of living.  With fear beating on the chambers of the heart, and running its shocks through the channels of the mind, faith is a steadiness of spirit that stays itself in God’s peace.  Faith accepts the moment without subservience to it, keeping its eye on the fear at hand as inferior to the vision of God, however dominant and disgusting and dangerous fear is. 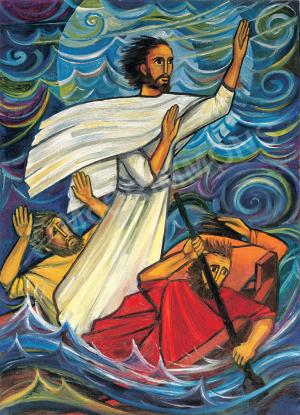 John Newton, long ago a captain of an English slave ship, found that faith gave him the ability to see humanity in his cargo and inhumanity in himself, and to risk the wrath of the ship’s owners and the slave traders by pronouncing himself an abolitionist.  He wrote, in his hymn Amazing Grace, these words:

How sweet the name of Jesus sounds in a believer’s ear!

It soothes his sorrows, heals his wounds, and drives away his fear.

2.  Jesus Calms the Storm by Laura James.  Prior Blogpost.

4. No Storm Can Shake My Inmost Calm, by Mickey McGrath OSFS.  Google Images.