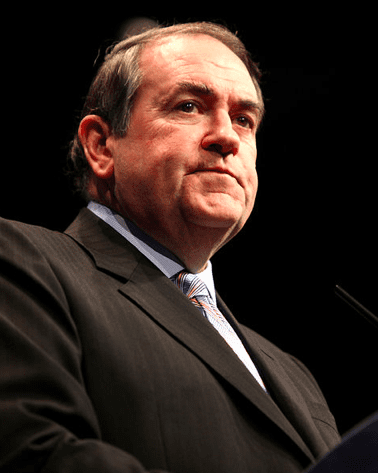 Yesterday, I was at Track’s house for his last night in town before he deploys back to Afghanistan. That’s where I got an e-mail explaining that Mike Huckabee had just told his radio audience that he was very disappointed in me. Here’s what he said:

We had earlier in the hour that Bristol Palin would be joining us about a new reality t.v. show that she’s going to be doing.

And apparently, she just didn’t show up.

So guess what?  I don’t guess we’ll be watching tomorrow when her new show lines up.

He goes on to say that he doesn’t believe children of politicians deserve to be criticized for their parents’ decisions.  He regrets his own children have suffered for his own choices as a politician.

There’s a different story once the child decides, “Hey, I like this spotlight. I like the limelight. I want to have more of it,” then, you know, they become fair game.

Then they are there by their own choice and their own volition. So if you go on Dancing with the Stars, or go on a lecture tour, or do a reality show, then, all bets are off…

He continues by saying he didn’t think David Letterman was fair to me during the 2008 campaign.  However:

I hope she’s ready for it, because now it’ll come not because of what her mother chose to do but because she’s said, “Hey, I want to be in the spotlight.

I understand Gov. Huckabee has a huge challenge creating a radio show he wants as the alternative to Rush Limbaugh. I understand he wants to fill his show with a little controversy – and what better way than to create headlines telling the world he now considers me “fair game.”

However, does he really believe I don’t understand what it’s like to be “fair game?”  Anyone who’s seen this blog – or the newspapers or the television – knows I’ve been through quite a bit of media speculation, ridicule, scorn. I’ve been writing about my own political ideas and have been “fair game” in my comments sections.  I’ve also defended myself from vile comments from leftists like Bill Maher.  Is Mike Huckabee joining into that scorn supposed to intimidate me?

You’ve got to actually listen to it, to get the full effect of his scolding tone.

I would’ve considered it an honor to talk to his viewers about my show, my experience of single motherhood, and what a wonderful little boy Tripp is.

But the fact is, his people didn’t schedule my appearance. I’d said I’d do the show, I sent them my phone number, and they apparently neglected to schedule a time. Of course, mix-ups do occur in life.  Schedules aren’t communicated, errors are made.

But this isn’t the first mistake on his show.  Maybe instead of lecturing me on being irresponsible, he should get his own team in line.

Then, maybe, we could talk.

But I probably would just call Rush instead.

June 20, 2012 Why I Did a Reality TV Show
Recent Comments
439 Comments | Leave a Comment
"Charges ? ? ? That's Funny.... Bottom Feeder Down ..."
Rickey Douglas Love How Else Was ‘He Gonna Get ..."
"Her "belief" in this discount goes against our laws. That is why she was threatened ..."
Cvb Restaurant Stops “Prayer Discounts” after Atheists ..."
"I'm thinking you don't know any atheists either katepatate. Or at least don't realize you ..."
Cvb Restaurant Stops “Prayer Discounts” after Atheists ..."
"Wow. Sodomites and atheists . Interesting. Can we assume you are referring to gays? And ..."
Cvb Restaurant Stops “Prayer Discounts” after Atheists ..."
Browse Our Archives
get the latest from
Politics Red
Sign up for our newsletter
POPULAR AT PATHEOS Politics Red
1