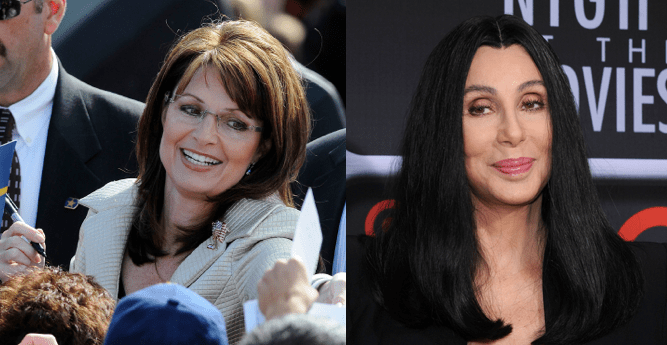 Remember when everyone thought Cher had already passed away?

Apparently, she’s still around, because she been sitting around tweeting about my mom, someone who’s not even remotely connected to Cher’s life or music.

On her Twitter account, Cher has two mixed messages. On one hand, she proclaims “There’s only love and fear.” 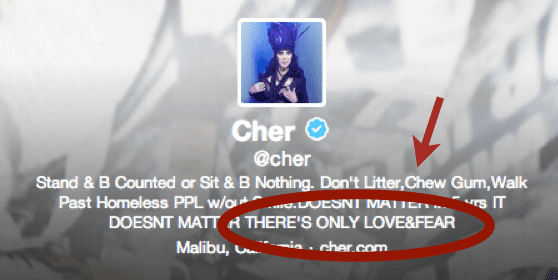 But on the other, she called my mom a “a dumb C word.”

Is that tweet supposed to be in the “love” category?

Imagine if someone called Chaz a “dumb C word.” (Who I got along with so well through Dancing with the Stars, by the way.)  She would, of course, accuse them of “bullying.”

What is with this double standard in Hollywood?

I’ve written about this before.   People like Cher are the bullies:

“… I see a lot of hate and a lot of bullying, but you know what I didn’t see much of?  Arguments.  Here’s a news flash, guys.  Your hate and bullying don’t work.  People see through it, and they don’t like to be pushed around.  You think it’s completely obvious that you’re right, but… we think for ourselves.  And we’ll keep thinking for ourselves no matter what you call us.  So keep sending the hate, but realize that hate doesn’t win arguments.”

But here’s the thing.  Cher, who pretends to be a feminist, chose to “empower women” by calling the first female GOP Vice Presidential candidate “dumb” and “the C word” because she disagrees with Mom’s positions.

November 24, 2013 Life - It's Not a Matter of Science? Really?
Recent Comments
337 Comments | Leave a Comment
"Charges ? ? ? That's Funny.... Bottom Feeder Down ..."
Rickey Douglas Love How Else Was ‘He Gonna Get ..."
"Her "belief" in this discount goes against our laws. That is why she was threatened ..."
Cvb Restaurant Stops “Prayer Discounts” after Atheists ..."
"I'm thinking you don't know any atheists either katepatate. Or at least don't realize you ..."
Cvb Restaurant Stops “Prayer Discounts” after Atheists ..."
"Wow. Sodomites and atheists . Interesting. Can we assume you are referring to gays? And ..."
Cvb Restaurant Stops “Prayer Discounts” after Atheists ..."
Browse Our Archives
get the latest from
Politics Red
Sign up for our newsletter
POPULAR AT PATHEOS Politics Red
1