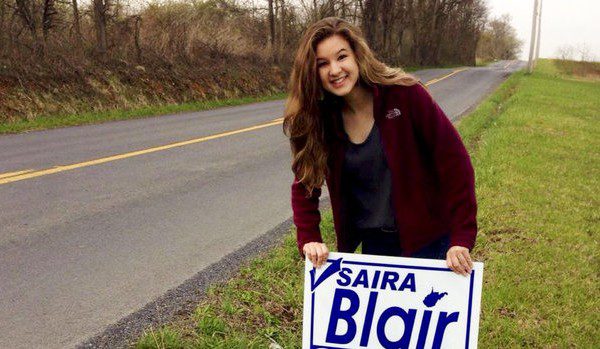 She’s also pro-business, pro-Second Amendment, and pro-Constitution. And apparently a pro at communicating her state’s values, because she’s been elected the youngest state lawmaker in West Virginia history!

Watch some interviews with Saira and you’ll see why I love her. She’s not ashamed to be young and conservative. She made her principles the center of her campaign, and it worked.

Against all odds, Saira beat a two-term incumbent in the primary and then defeated her Democrat opponent on November 4, 63% to 30%!

She told Fox & Friends that she’s “watched too many kids my age leave the state because they can’t find a good-paying job… I just want to bring business back to the state of West Virginia.” Her emphasis on jobs really worked.

After winning the general election, she wrote on Facebook that the road to “prosperity and success is rooted in conservative values and principles.”

When I made the decision to run for public office, I did so because I firmly believe that my generation’s voice, fresh perspective and innovative ideas can help solve some of our state’s most challenging issues.

Saira graduated high school right after winning the primary, and she plans to take classes at West Virginia University during the fall and summer so she can focus on her new job as a representative during the spring.

And when people ask if she’s too young? She said:

Right now, the average age in U.S. Congress is 57, and the average age in the U.S. Senate is 62. But with all that experience, the only thing we’ve gotten is lower jobs, more debt, and less opportunity. So I don’t think a fresh perspective will hurt anyone.

Saira’s dad Craig Blair has also been a state Senator. She says making a difference through politics has always appealed to her. She’s watched and helped in her dad’s campaigns and figured she’d run for office eventually.

In her junior year of high school, she joined a group of 300 students for Youth in Government. They went through the whole legislative process, and she saw that even high school students could create good laws that would help for their state. So she thought, why not run now?

She hopes that other young conservatives will see her example and not be afraid to express their own views.