It’s True: Our President Traded 5 Taliban Leaders for a Deserter 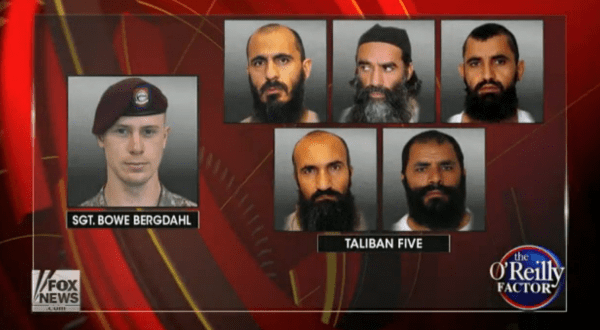 Wow, Obama was a real hero here! (and YES, I’m being sarcastic.)

Lots of people were mad when our President released 5 Taliban leaders from Guantanamo and traded them for 1 American soldier named Sgt. Bowe Bergdahl. Immediately we started hearing about how he left his company without permission and how others even died trying to find him.

Now it turns out those stories have been confirmed by the Army, and Bergdahl is about to be charged with desertion.

Retired Lt. Col. Tony Shaffer went on Bill O’Reilly’s show to reveal that the Army’s investigation has finished and Bergdahl’s lawyer has been told about the charges that are coming.

This makes me sick. We traded prisoners for a guy that deserted his platoon and our country. Lt. Col. Shaffer says those 5 Taliban members weren’t even briefed by the Pentagon’s senior leaders before being released. And I’m sure that our soldiers have DIED capturing those prisoners too.

Of course, immediately the Pentagon denied that a decision has been made. Shaffer knew they were trying to keep the decision hush-hush and told O’Reilly what he knows about the “titanic struggle behind the scenes.” The Army wants to do the right thing according to its rules, but the White House for obvious reasons doesn’t want this story out.

Well, they won’t be able to deny the facts in the end… and they can’t change what happened. They’re just making themselves look worse by dragging it out.

January 31, 2015 Contact these Virginia Legislators NOW to Support #ConventionOfStates and Save America!
Browse Our Archives
get the latest from
Politics Red
Sign up for our newsletter
POPULAR AT PATHEOS Politics Red
1