10 Things That Cause Catholic Social Media To Erupt

Catholic social media circles are a volatile place to be, though some would argue that it’s like every other online community. And like other online cirlces, the Church has its very own hot-button topics that set people ablaze in an instant.

There are several other topics and public figures that could have made this list, but this is only my own compiled list based on the online interactions I’ve partaken in personally.

He’s not the most articulate Pope to sit in Saint Peter’s chair, and he’s certainly proven himself to be one of the most controversial in the last century. His interviews are often misquoted, taken out of context, misrepresented or highly ambiguous, provoking massive outrage across the board.

I don’t envy the Holy Father for being in the position that he’s in. I will say I quite appreciate his ‘hands-on’ approach to social and economic issues from a Catholic standpoint, but there are times when even I find myself flinching at something I’ve read that may or may not have come from him.

As a Canadian, I can’t say much about American politics since it doesn’t affect me directly. But as a neighbor north of the border, I can’t help but sit back and feel concerned for my friends south of the border as they deal with what appears to be a massive political dumpster fire.

I’m personally not a fan of Trump, and I disagree with him on his approach more than I could stomach myself to agree with him (after all, a broken clock is always right twice a day). But the liberal outrage over everything Trump says is so grossly exaggerated on social media that his mere flatulence would be blamed for contributing carbon emissions. It’s equally as exhausting as the conservative derangement over Pope Francis, but it only comes to show how divided we have become as a society and as a Church.

Fr. Martin navigates territory where few Christians are willing to go. He puts himself in a position where LGBTQ individuals will easily chastise him as a bigot for supporting Church teaching, and simultaneously being harshly lambasted by other Catholics who wouldn’t be caught dead in the same room with a homosexual person. He hugs the line of orthodoxy close enough without crossing it (at least from what I’ve read in his book “Building A Bridge”).

I think most will agree with his message that LGBTQ Catholics (like all other Catholics) deserve to be treated with dignity, are called to live their baptismal vows and find their identity in Christ. Though his tweets on social media tend to come across outlandishly heterodox without any context to them.

Ever since the Second Vatican Council ended in the 1960’s, the Church in the West has undergone a drastic change — to which many Catholics would argue that it wasn’t for the better. Hence why we have a divide of cliques between what some call ‘modernists’ and ‘traditionalists.’

I personally have a heartfelt appreciation for the liturgy of the Tridentine Latin Mass, but I’m not one of those people who believes the Novus Ordo Mass is invalid, illicit or less Catholic by any means. If anything, there really shouldn’t be a prefix to the title of ‘Catholic Christian,’ but here we are.

See my article:
I Long For Catholic Unity

Admittedly, I’ve never got into the books since I’m more of a Tolkien and Star Wars fan. But from what I’ve seen in the couple movies I’ve watched, the themes of good versus evil are nearly as predominant.

I’ve been tempted to write an article addressing the apprehension of occult influences in Harry Potter lore, but there have already been several Catholic internet voices who have wrestled with this subject, drawn similar conclusions as I have and explained their positions far better than I ever could. Feel free to check them out!

As a fellow Patheos blogger, I find I either wholeheartedly agree with him or end up rending my clothes in a furious spell of high blood pressure. His political monologues might be a little too much to bear for ultraconservative virgin ears. However, his theological apologetics works (in my humble opinion) are fantastic!

Hey, Mark. If you’re reading this, know that I love you, man. Though there might come a time when I challenge you to an arm-wrestle. Watch your back! 😛

These three issues seem to frequently appear in the same conversation, and equally invoke heavily impassioned responses all around — and for a good reason.

As Catholics, we have a moral obligation to partake in works of charity and care for life from womb to tomb. Whether you’re for or against gun control, I think everyone has a right to defend themselves against harm (but not everyone should be entitled to a weapon that could compromise the safety of law-abiding citizens). I have yet to write on that subject.

As far as immigration control and abortion, feel free to check out my articles below:
My Thoughts On Immigration Control
A Perspective On Abortion Regarding Bodily Autonomy

After reverting to Catholicism, I was surprised to learn that this was even a controversial topic. It’s mostly attributed to the idea that men are typically the breadwinners/providers and women ought to stay at home, care for children and become homemakers.  Albeit, nobody chooses what economic circumstances they were born into, and many families have no choice but to have both parents working in order to make ends meet.

My Patheos blogger friend Joanna Wahlund has her own page. Check it out!
The Catholic Working Mother

We all have our trigger words, whether we admit it or not. In the Catholic realm of the internet, I’ve noticed the word ‘modern’ or ‘modernization’ is often erroneously conflated with the word ‘modernism.’

Don’t get me wrong, I have my own reservations on modernity. After my own experiences with contemporary Christian worship and mulling over moral and theological relativism, I’ve concluded that traditional liturgy and practices are a far more authentic form of reverence that focuses on what transcends time and space as opposed to the latest trends. But nothing shakes up Catholic twitter like bringing up Communion in the hand, the orans posture, the tabernacle placement or holding hands during the sign of peace.

See my articles:
Tradition Is Not A Dirty Word
Does It Matter How We Worship?

You would think that racism would be an issue of the past nowadays, but we as a society and a Church are far from seeing the end to it. Antisemitism has been an ongoing problem since the days of the Early Church, and there seems to be a resurgence of it in the corners of Facebook debate groups and Catholic Twitter. When emotions run high during an online debate, it’s can be easy to assume that an opponent might have racist views when it could be because they’ve never been exposed to different cultural views. For others who’ve been around for a while, there shouldn’t be an excuse for behavior that demeans a person’s heritage or ethnicity.

I think the Church has its work laid out ahead of them in reconciliation and healing for injustices it was responsible for in the past. No one has ever claimed the Church was made of perfect people, but I think there’s plenty of room for improving it to be a safe place for the spiritually wounded and broken.

See my article:
The Church and Canada’s Abysmal Treatment of Indigenous People

Can you think of any others? Share them in the comments! 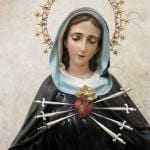 February 3, 2020 What Are The Seven Sorrows Of Mary?
Browse Our Archives
Follow Us!

Did the Mainstream Media and Bill...
Public Catholic
Related posts from Coffee and Crucifix

Catholic
A Reflection on the Parable of the Good...
Coffee & Crucifix

Justin Martyr and the Mass in the Second...
I was not always Catholic. Those who knew me before my conversion...
view all Catholic blogs
Copyright 2008-2020, Patheos. All rights reserved.