What Does The Wolf of Wall Street Teach Us About Faith and Lent?

Scorsese caught a lot of flack for The Wolf of Wall Street. The critics said that he made the life of blue-collar crime seem too fun and sexy. I bought into the criticism. That’s precisely the reason why I wanted to see them film.

My analysis of ISIS probably suggested to you that the ex-seminarian Scorsese’s films are an obsession of mine. It’s true. They are marked, to borrow the title of a favorite cinema criticism book, an afterimage of Catholicism. All the mafiosi, drug dealers, and would be messiahs, even the charismatic musicians in his documentaries, are in one way or another obsessed with building tight knit communities in the image of preconciliar Catholicism–and they always fail.

Therefore, you can be sure, that his forthcoming adaptation of Endo’s Silence isn’t the only film obsessed with questions of faith: All of them are.

Pfau’s Minding the Modern (mentioned in an earlier post in connection with Aquinas) presents dogmatically naturalist neuroscience (leaving the door open to what’s been called the 2nd Scientific Revolution?) as a form of misplaced faith:

Anticipating … contemporary neuro-scientific ‘explanations’ of consciousness, the naturalist Hume makes strong deterministic claims for the way that consciousness depends on intrinsically material, non-cognitive causal sequences while postponing the presentation of evidence into the (indefinite) future, simply because the research needed to clinch the naturalist thesis remains as yet incomplete. Such a highly speculative argumentative structure—which in our time also pervades the neuro-scientific naturalism of Dennett, Chalmers, and others—notably resembles the financial pyramid schemes with which Hume’s contemporaries were just becoming familiar. That is, while disputing as a matter of principle the validity of any competing (realist or conceptualist) explanation of consciousness in the present, a radical naturalism secures its own authority not by actual demonstration but by promising wondrous returns at some indefinite point in the future. Yet inasmuch as such dividends cannot be paid out unless the genesis of consciousness has been traced by way of an infinitely subtle and exhaustive mapping of the ‘functional organization of the brain’ (construed as ‘the abstract pattern of causal interaction between various parts of a system’), that future pay-off will in fact never be reached.

The pyramid scheme metaphor circles back to The Wolf of Wall Street: Its real-life protagonist made his fortune by selling crap stocks to buyers who were susceptible in misplacing their faith in his word. It’s the same sort of analogously religious scheme that led to the bubble of 2008.

I’ve always considered Lent a period to give up on such false attachments. This is why giving up something temporarily, cookies or facebook, temporarily. seems like a copout to me. If these misplacements of faith are so harmful to you, why not give them up forever?

In other news: I’ve received my second job application rejection this week. It’s too bad I can’t give up searching for employment this Lent. Cause, you know, having a really job is something I ardently and authentically desire. I need that future pay-off sooner than later, or else things will turn dreary real fast.

I leave you with the problem of appearance and reality and faith at the bottom of Lent and all of life.

February 17, 2015
Stand by Your Man: Are Some Feminism(s) in Capitalism's Bondage?
Next Post 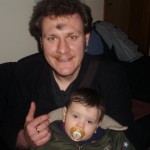