Culprit Behind Breasts Ballooning is Breaking Creation’s Back

I can’t even begin to explain the algorithms that got me to the DailyMail story on the scientific study of involutnary breast augmentation. I couldn’t resist the story, because it is of theological interest.

In his book on the doctrinal implications of human evolution Karl Rahner said the following about the relationship between theology and current events:

For we observe, of course, even today, that the real decisions of a man can occur very implicitly in a global commitment, in a fundamental decision regarding some conceptual content which to all appearance is very far removed from God and moral principles, whilst in the domain of what is expressly religious and moral, more or less sham fights are waged and such things only serve to hide the real decisions.

This, I will argue, is also the case with women’s breast sizes. Their tie to theology is buried deeper than the genre of Madonna lactans paintings, as superficially scandalous as they are to the Puritan eyes of late moderns.

Let’s dive into it with the “secular” facts first. You might have noticed that breasts are generally getting bigger, much bigger.

It’s OK to admit it, because you are correct:

But, according to Bravissimo’s ­estimates, at least 60 per cent of women wearing a C-cup should be wearing a D-cup — or larger. And it says the average British bra size is closer to a 34E than the 36C we are led to believe. But we don’t owe our e­xpanding bustlines to modern fitting techniques alone. Back in the Fifties, the ­average woman wore a B-cup — a full size smaller than today’s larger size. It’s clear that our dimensions have shifted, but why?

According to the story the shift does have something to do with the unhealthy fatty modern diet and our sedentary lifestyle. But there’s something more going on here if you look long and hard enough:

Dr Glenville, author of Boost Your Fertility, says: ‘It makes sense to look at the ways in which our exposure to all types of oestrogen — the hormone our own bodies produce and oestrogenic chemicals we come into contact with — has changed over the years.’

‘Girls today reach puberty earlier than ever before, and are going on to have fewer ­children and breastfeeding for less time. As a result, we have far more periods than our ancestors would have had and we are exposed to more monthly surges of oestrogen, which stimulates ovulation.’

In addition, today’s young women were born to the first ­generation of women on the contraceptive Pill. Early versions of the Pill contained far higher dosages of synthetic ­oestrogen than they do today, and little is known about the long-term impact of this increased hormone exposure on future generations.

In other words, the sexual revolution has brought us inorganic sex. The Reagan revolution brought us deregulation. Put the two together and you get a Big Phrama experiment run on nearly all women in the Western world without their consent, without any oversight. Is it any wonder when some make the connection between feminisms and big business?

In contrast, the more natural regime of previous ages was much less of a load on the back and other joints:

Dr Glenville says: ‘Pregnancy and breastfeeding have a ­protective effect against breast cancer because they control the hormones which stimulate the growth of new cells in breasts.

‘But with more women today putting off pregnancy until later in life and having fewer children, they experience many more monthly cycles than previous generations did, and are exposed to more oestrogen.

‘I’m certain that if you looked at photographs of Victorian women, who on average had five or six children, you’d find them comparatively flat-chested.’

One thing is clear, both Eve AND Adam have changed after the pill:

But it’s not just women on the Pill or HRT whose ­oestrogen levels, and cup-size, might have increased as a result.

In 2002, research published by the Environment Agency showed that an ‘exquisitely potent’ form of oestrogen — which is believed to have entered the rivers through the urine of Pill and HRT-users — was responsible for changing the sex of half of all the male fish in British lowland rivers, and could be contaminating the water supply.

Now, it has been suggested that the influence of these xenoestrogens (literally ‘foreign ­oestrogens’) could be responsible for the rapid decline in male sperm count and fertility.

‘We can’t assume these ­pollutants have no effect on us,’ says Dr Glenville. ‘There are many questions still to be answered, but if xenoestrogens are potentially responsible for declining male fertility, they are potentially affecting women, too — and the proof could be in our bras.’

The piece mentions estrogen delivered in the milk we drink, but we also eat meat packed with a lifetime of estrogen and other hormones.

The final tally? Not only is human nature being destroyed, but our fertility is being stolen behind our backs, and the natural environment is changing as well.

Those of you inclined toward conspiracy theories might wonder whether the pervasiveness of estrogen in the water is somehow behind the recent massive proliferation of gender identities . . .

The theology of Creation, so central to Christianity, is disappearing right before our eyes as Catholics continue their sham theological fights in print and pixel. Look straight at the reality before you instead. The problems are bigger than we suspected. Look, don’t be bashful.

The hormones in our food are killing the theology of Creation. Taken from another angle: human creations are taking over Creation and we have no idea what the consequences will be. This is yet another example of how the degradation of the environment is tied to seemingly exclusively human matters. As a consequence being pro-life is much more expansive than most people think.

This disturbing news is all the more reason to heed the call of Laudato Si’ to resist the greed that is covertly using us a guinea pigs.

After all that you might need a little comic relief, so here’s the “These things usually travel in pairs” episode from Woody Allen’s Everything You Always Wanted to Know About Sex, but Were Afraid to Ask:

After reading through all that you will definitely want to peruse Benedict XVI’s Theology of Bacon (& Creation), or Stand by Your Man: Are Some Feminism(s) in Capitalism’s Bondage? 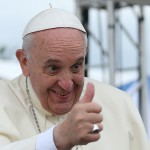 February 3, 2016
Ask God to Shatter Your Heart
Next Post 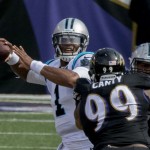 February 6, 2016 Why Cam Newton Matters
Recent Comments
0 | Leave a Comment
Browse Our Archives
Related posts from Cosmos The In Lost