Ever Wonder Why Saint Paul Went to Arabia?

Arabia is a geographical entity familiar and vexing to the contemporary Westerners, but what could it have meant to Paul?

There’s no indication in Galatians 1 the future saint went there to combat ISIS, or to fight for Israel in the hope of igniting Armageddon:

But when God, who from my mother’s womb had set me apart
was pleased to reveal his Son to me,
so that I might proclaim him to the Gentiles,
I went into Arabia and then returned to Damascus.

This curious reference was passed over by our Irish priest in today’s sermon in favor of talking about miracles and the Mariners. He prayed for a miracle to Leonie Martin right before Leonys Martin had a walk off two-run blast on a two out, two strike, pitch a couple of weeks ago to give the home team an improbably victory. It worked, see video at the bottom of this post.

Fair enough, I had to scramble to a more reliable source, McKenzie’s Dictionary of the Bible. Alas, the Jesuit let me down a bit–the cynical might say that’s as expected from the Jesuits. He only mentioned that the Arabian peninsula is the original home of the Semitic peoples, the place where the father of our faith (Abraham) left, and that Mt. Sinai might be located there. If we take these three clues together then we might come to the conclusion that St. Paul might have been going back to the roots of the faith.

I was perplexed there was nothing about St. Paul in Arabia in Barbara M. Bowen’s little classic Strange Scriptures that Perplex the Western Mind. I looked there because she based many of her explanations of difficult biblical passages upon the habits of Arab nomads whose behaviors have not changed since before biblical times. I’m sure I’ll return to this book in the coming weeks. It’s a real treasure trove.

After these failed efforts I reached for Margaret Barker’s King of the Jews: Temple Theology in John’s Gospel, which makes explicit reference to today’s reading:

Justin, a native of Palestine writing in the mid-second century, said the magi came from Arabia, but his voice has been largely unheard, and the magi are invariably linked to Persia. . . . Exactly what Justin meant by ‘Arabia’, however, is not known. Herod was an Arabian but he came from Edom, and Josephus said that Petra was the capital of Arabia. It was not today’s Arabia. After his conversion, Paul went to Arabia (Gal. 1.17), and his visit may help to identify the magi. He came back better informed about his new faith and able to explain that Christianity was rooted in something older than the law of Moses. Who instructed him? Paul went on to teach that Christianity antedated the Sinai covenant, and was based on righteousness through faith. Abraham was the great example, and his true heirs were righteous through faith. The righteous have proved to be a significant group in the nativity story (Luke 1.17, 75; Matt. 1.19), and Abraham and his heirs were important for Zechariah and his son John (Luke 1.73; Matt. 3.9).

It appears Paul was not after Saudi air conditioning and oil. He was hunting down an ancient tradition of the First Temple that was essential for understanding Christianity. But is this tradition a figment of Justin Martyr’s imagination, or something actually documented in other places? Barker’s The Great High Priest: The Temple Roots of Christian Liturgy offers solid clues from an ancient Jewish primary source:

It was Josiah, not Nebuchadnezzar, who finally destroyed the old temple, and there were long memories about the work of Josiah. Essential items from the temple were ‘hidden’ in his time – the anointing oil, the ark, the manna and Aaron’s rod (b. Horayoth 12a), and in the time of the Messiah the lamp, the ark, the Spirit, the fire and the cherubim would be restored to the temple (Num. R. XV. 10), the implication being that these were absent from the second temple but had been in the first. It was also remembered that eighty thousand priests fled to the army of Nebuchadnezzar, and then settled among the Ishmaelites (/. Ta’anit 4.5, The Jerusalem Talmud, often known as Yerushalmi). Not everyone was grieving when Josiah’s ‘reformed’ temple fell. The Jerusalem Talmud continues with lines from Isaiah 21.13-14, and interprets them as a reference to the departed priests. ‘The oracle concerning Arabia: In the thickets of Arabia you will lodge …’ was said to mean ‘A great burden is on Arabia’ (Hebrew masa’ can mean oracle or burden), ‘for those who had been in the Forest of Lebanon [the temple, 1 Kgs 7.2] are now in the thickets of Arabia’. From this we may conclude two things: the priests with the older ways and therefore with knowledge of the traditions of the holy of holies, were known to have gone to Arabia, so we should expect to find remnants of the first temple among the sons of Ishmael; and second, that this was still remembered when the Jerusalem Talmud was compiled in Palestine about 400 CE.

So we started with St. Paul, but he was going all the way back to Abraham. (You didn’t think I picked the feature image for this post randomly, did you?).

There we learn how the First Temple reproduced the seven days of Creation. The High Priest was responsible for keeping Creation in harmony through elaborate rites that culminated with a scapegoat ritual. When you think of Jesus as both the scapegoat/victim and priest, as in the Letter to the Hebrews, then you can glimpse how the pieces begin fall into place. Therefore, McKenzie’s Dictionary of the Bible gave us all the right basic threads, but the carpet Barker weaves in Temple Theology ties them all together.

Jewish tradition remembered and recorded that many priests of the original temple had fled to Arabia after the time of Josiah’s purge. They must have taken with them the faith of the older temple. Paul also spent time in ‘Arabia’ (Gal. 1:17) before returning and arguing that the roots of Christianity lay in the faith of Abraham.

Traditions associated with the origin of Islam knew that there had been another ancient faith that was neither Christianity nor Judaism. There earliest account of the life of Muhammad was written by Ibn Ishaq in the middle of the 8th century CE and so only about 100 years after the time of Muhammad. Before the prophet appeared, he wrote, four good men set out to seek the religion of their father Abraham, which they believed their people had corrupted. ‘They went their several ways in the lands, seeking the Hanifiya, the religion of Abraham.’ One of them eventually met a Christian monk in Syria who told him there was nobody left who could guide him to the religion of Abraham, but that a new prophet would soon appear. The Qur’an too distinguished between the religion of Abraham and the religion of Moses… Much of the Temple lore re-emerged in Islam; the traditional dimensions of the holy of holies are also those of the Kaaba.

You weren’t expecting the connection Islam, were you? Well, should you want to explore this admittedly speculative line of investigation, then Barker’s Temple Theology is your best entryway into her vast publications. BUT, BE WARNED–once you pop open one of her works, you can’t stop…

You might also want to know How Did Disappearing Middle Eastern Religions Survive in the First Place?, or Rene Girard: Is Christianity a Myth? 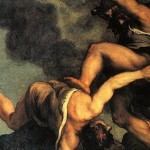 May 28, 2016
Obama Used Original Sin to Explain Hiroshima
Next Post 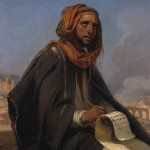 June 7, 2016 Did God Rape the Prophet Jeremiah?
Recent Comments
0 | Leave a Comment
Browse Our Archives
get the latest from
Cosmos The In Lost
Sign up for our newsletter
POPULAR AT PATHEOS Catholic
1

In Defense of Preferred Pronouns
About a week ago, Joseph Strickland, the bishop of Tyler, Texas, and...
view all Catholic blogs
What Are Your Thoughts?leave a comment
Copyright 2008-2020, Patheos. All rights reserved.