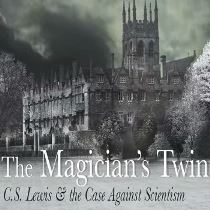 A couple of years ago, I attended the premiere of the Discovery Institute’s video The Magician’s Twin: C. S. Lewis on Science, Scientism, and Society.

The Discovery Institute is a Seattle-based think tank whose Center for Science and Culture (CSC) is dedicated to undermining public support for evolution. Though evolution wasn’t a main theme for this video, rejection of evolution and a positive case for Intelligent Design are the goals in two subsequent videos.

Before I review the film, take a look at the organization that created it. The budget of the CSC is reportedly $4 million per year. The agendas of foundations and wealthy individuals who contribute include the goal of “total integration of biblical law into our lives” and commitment to “the infallibility of the Scripture”—acceptable goals in a free society but incompatible with the scientific goal of following the facts where they lead without crippling it with an agenda.

In a reasonable world, an organization dedicated to exploring the limits of biology would be staffed with biologists—people who actually understand the science and who are capable of evaluating it. But, unsurprising to any observer of Creationism and related fields, there are very few here. There are lots of doctorates among their 40-odd fellows, but as for relevant ones, I could only find these two:

The approach of the Creationism industry is similar to the tactic of “fear, uncertainty, and doubt” used in the computer industry. Back in the mainframe computer days, IBM’s product was more expensive. IBM salesmen were said to soften up reluctant customers by reminding them, “Keep in mind that no one was ever fired for buying IBM.” In other words: you pay a little more and you’ll get a reliable product, but if you cut corners, you may find yourself out of a job.

The Creationist version is to acknowledge the fruits of science but then mention hoaxes (Piltdown man, the Cardiff giant) or errors (ether, geocentrism) or dangers (radioactivity, surveillance) or embarrassments (eugenics, Tuskegee syphilis experiment). Are you really sure about this whole science thing?

Creationism saying that science is valuable is a bit like Mark Antony saying in Shakespeare’s Julius Caesar, “Brutus is an honorable man.”

And that approach colored The Magician’s Twin. It was a mixture of sensible cautions against a thoughtless acceptance of all things scientific—“if it comes from science, it must be worth adopting,” or “if science says so, it must be true”—and a subtle undercutting of the credibility of science.

Lewis felt that science and magic are twins in three ways.

1. Science as religion. Consider the crowd of atheists that attended the national Reason Rally, science giving meaning to people’s lives, and Darwin Day celebrations. This is what religion does!

Is that all religion is—community, meaning, and celebration? No, the supernatural is fundamental to the meaning of religion. Indeed, this supernatural-free caricature of religion seems insulting to believers.

I attended the Reason Rally, and yes, that sort of community is a valuable thing. The Sunday Assembly is a weekly gathering for atheists that is becoming popular. Religious people and atheists find value in community, meaning, and celebration, but they don’t share belief in the supernatural. Science is quite plainly neither religion nor magic.

2. Science as credulity. Science discourages skepticism and encourages gullibility. And what is it built on? C.S. Lewis said, “If my own mind is a product of the irrational, how shall I trust my mind when it tells me about evolution?”

This is a variant of Alvin Plantinga’s Evolutionary Argument Against Naturalism (addressed here). If evolution were true and your mind were honed by natural selection (those minds that thoroughly understood reality being more likely to survive than those that didn’t), we’d expect it to give you a fairly trustworthy account of reality.

As for skepticism and gullibility, I’ll grant that public science education is poor, science is dangerously misunderstood within society, and politicians sometimes fall over themselves to dismiss the scientific consensus when unpleasant. Let’s work together to fix these problems, but don’t pretend that religion is on the right side of this issue.

(I argue that the lay public has no option but to accept the scientific consensus here.)

3. Science as power. Much of science is devoted to power over nature. Unlike magic, you actually can control people with science. Eugenics, drone aircraft, bar codes, transhumanism, and surveillance cameras are some of the many technologies that have downsides.

Let’s be clear on what does what. Science does its best to tell us what is true about nature, and policy decides what to do with this information. You don’t like eugenics? Fine, but don’t blame science for it. “We should sterilize population category X” is a policy statement, not a scientific statement. “Here’s what you need to know about optics to make a video camera work” is from science; “We should install surveillance cameras in public places to reduce crime” is from politics.

In the Q&A afterwards, the video’s director raised concerns about groupthink within biology. Sure, following the crowd rather than the evidence should be avoided, but is this really a major problem? It reminded me of a powerful story Richard Dawkins told in The God Delusion about a senior lecturer in the Oxford zoology department. The professor believed that one feature of the cell was an artifact and didn’t actually exist. One day a visiting American lecturer presented evidence powerful enough to convince even this skeptic.

At the end of the lecture, the old man strode to the front of the hall, shook the American by the hand and said—with passion—“My dear fellow, I wish to thank you. I have been wrong these fifteen years.” We clapped our hands red.

The video does raise appropriate cautions about science. But how do we constrain science as a force for good without taking the nonsensical path of encouraging citizens to pick and choose their scientific truths for themselves? My suggestions:

Yes, it is rare that one disputant in an argument convinces another.
Thomas Jefferson said he had never seen it happen,
but that seems too harsh.
It happens in science all the time.
— Carl Sagan

February 2, 2015 The Great Commission and How It Doesn’t Apply to You
Recent Comments
68 Comments | Leave a Comment
Browse Our Archives
Related posts from Cross Examined