The humor of domestic mercy: for the Feast of the Holy Great-Martyr Eugenia at the end of St Philip’s Fast

The day that most people know as Christmas Eve is for us on the New Calendar the Feast of the Holy Great-Martyr Eugenia of Rome. It is from that premise that I want to begin my reflections today as St Philip’s Fast wraps up.

In writing this blog, I have had many interlocutors, but perhaps one of the most public ones has been my former student Eugenia Geisel, whom I taught at the University of Washington when I was a postdoctoral fellow there. It’s her name day today, and the necessity of me being in Richmond to realize this fact is not lost on me. When I am in Chicago, I am on the Old Calendar, which means that Nativity is still a few weeks out for my sisters and brothers there. Here in Richmond, I am on the New Calendar, and as I perused through the list of saints whose days we celebrate in this time of the forefeast, Eugenia’s is the one that comes up on December 24.

Perhaps it was a function of me reflecting so heavily on my icons in Chicago, but the first thought I had when I saw my beautiful corner in Richmond was that Eugenia’s family has been such a formative force in shaping my spirituality. Last year, the presence that dominated this home altar was the icon of the Great-Martyr Eugenia herself. My spiritual father had acquired it at the end of the summer on a retreat that he had taken, and it had sat in my home for months until Eugenia visited Richmond for our Theophany service and acquired her for herself. When I returned to Richmond the next summer, Eugenia’s family sent me a new icon, one of the Holy New-Martyr Elizabeth the Merciful. She has now taken the place where the Great-Martyr used to occupy in the icon corner.

It would be glib to comment on the transition between having an icon of a Great-Martyr to that of a New-Martyr, but that is why I am increasingly slow to make such reflections. I prefer to let them sit. I observed upon my return that the icon of this Orthodox new-martyr, associated as she was with the Romanovs and therefore initially suspect when it comes to my perverse democratic adjustments to symphonia claims, that having St Elizabeth around has been terribly clarifying about the other icons that flank her: the Holy Bishop of Rome John Paul II, St Teresa of Calcutta, the Holy Apostle Jude, St Anthony of Padua, the Virgin Theotokos of the Passion (commonly known as ‘Perpetual Help’), Christ the Teacher, and the Theotokos of Belz-Częstochowa. I share some of these devotions with Eugenia. Indeed, her guest series on my blog on World Youth Day in Kraków is bookended on one end by her running to the Black Madonna and then her deep consideration of John Paul II’s artistic sensibilities in relation to the Coen Brothers.

But what Eugenia and I share in this subjective sense is perhaps also not the point. What this icon corner in my home screams to me upon returning to it is that the Lord is an ocean of mercy. Each of these holy women and men offer windows into what that mercy looks like, and in pondering this, I realize how deep my conversion has truly been from Protestantism. I am usually tempted to agree with every reader who criticizes for me for not having left behind my evangelical sensibilities. However, in the slate of meetings with family and friends that have dominated my experience of this holiday season, I discovered to my great surprise when I spoke to some sisters and brothers who are thriving in their participation in an evangelical Protestant community that a spirituality based on the Lord’s mercy was foreign to them. Mercy, they felt, was a fearsome thing. For them it implied that God in his sovereignty could have struck us down for our sins but relents. A spirituality of mercy sounded to them like calling on God for his continuous relenting, and in this sense, a liturgy where the constant reverberating sound is Lord, have mercy sounded awfully morbid and guilt-ridden to them. They encouraged me to return to what they saw as a theology of grace, which they see as emphasizing the Lord’s forgiveness and love. Unfortunately for them, grace also means something different to me — it describes in its fullness the way that the Spirit of the Lord infuses all creation with life such that there is nothing that can be called pure nature absent from God — and so our conversation became accidentally theological very quickly.

Theology, I reflect, is more important to me than I thought it would still be, though I realize that I may be doing it differently than before I became Eastern Catholic. As I understand it, theology describes the world in terms of its spiritual order. The difference between my understanding of mercy and grace from those who are from my Protestant past is thus theological. Of course, I do not want to overly emphasize this differentiation. The season around Nativity is a time in which I, like many of others of my sisters and brothers, spend a lot of time with family, and most of them remain in the world of Chinese evangelical Protestantism. Just tonight, in what others who have a more cultural practice of the Kyivan Church might have had their traditional Nativity suppers with all the carols, we had a potluck with a group of Chinese evangelical friends who have become like aunts and uncles to us in the younger generation. After supper, we shared deeply, as in the tradition of the evangelical small group, and unlike most stereotypes of Chinese evangelicalism, they kept it real. I cannot divulge much of what was said, but I can say confidently that the fantasy that Chinese evangelicals of a certain generation are incapable of speaking sensitively about mental health, body image, and workplace difficulties have been sufficiently shattered for me tonight. We may have theological differences, but where the supernatural is to be found for us both is in the stuff of everyday life.

As I come to this end of this year’s St Philip’s Fast, my reflection is thus that divine mercy is to be found in such common spaces. Here it is that Christ is born; here, we must glorify him. My icon corner up here in Richmond exemplifies this theological sensibility. And in one last stroke of attempted humour before the festivities for the Nativity began, I was inspired to write Eugenia one stich in the fourth tone (mp3 here) for her name-day that captured her greater feminist contribution to my life as a person in my pop psychoanalysis posse, one that I feel is in deep accord with the hagiography of the Great-Martyr in the Golden Legend:

O Great-Martyr Eugenia,
your life story is like Mulan,
super badass, you fascinate even the Warholians,
your monastic governance transcended gender.
You would have loved Ariana Grande,
martyred as you dinged men for misogyny.
Pray for us now truly to be feminist.

Indeed, after I wrote that, I too was trolled by supernatural jest. Shopping with my sister in a place for Asian snacks on this fine secular holiday of Christmas Eve, I was offered a Chinese newspaper that had a picture of Daniel Craig, obviously posing as James Bond, on the front page. It was as if the Lord was reminding me how far I’ve come in my liturgical journey, because as far as I was concerned, the Fast we celebrate and the Latin celebration of Advent for me as a Chinese evangelical was the time of TBS Superstation’s 13 Days of 007, which was consummated for us children of the nineties by the terrible joke worthy of a Bond movie about the Denise Richards character in The World Is Not Enough, a Bond girl with the unfortunate name of Christmas Jones and an even more unfortunate dirty joke to go with it. I was first clued in that all was not always this way for the whole church, I remembered, by the Canadian Brass’s album A Christmas Experiment, a children’s celebration that showcases their liberal Protestant sensibilities and thus their much better connection to a theological and philosophical tradition than my consumeristic evangelical one. Perhaps I will reflect on this all later on in a future piece. But suffice it to say that after I thought I had concluded my Fast with a joke for Eugenia, the Christ who is born got the last laugh. Let us glorify him! 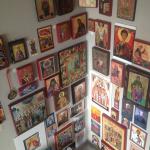 December 22, 2018
Friendship is a material thing: on not finishing my icon corner series
Next Post

December 29, 2018 The return of the Mother of Sheshan to my prayer: late reflections for Nativity and the Synaxis of the Theotokos 2018
Recent Comments
0 | Leave a Comment
"I can't believe you would consider the theological lightweight Kilby as a proper critique of ..."
antoniodec Fiat mihi secundum verbum tuum: on ..."
""Milbank criticizes Balthasar for being apolitical in his aesthetic reflections, and I can see how ..."
antoniodec Reading Sobrino on Óscar Romero and ..."
"the word is receptive, which has nothing passive about it but could be the most ..."
antoniodec Fiat mihi secundum verbum tuum: on ..."
"One can never "go home," not in this life."
billwald I’ve found my way home: on ..."
Browse Our Archives
Related posts from Eastern Catholic Person