Several studies have found that subconsciously priming people with religious concepts can encourage them to be more altruistic.The strange thing is, this seems to work just as well on atheists.

But most of these studies have been done in labs, and with Westerners. What about the real world?

Back in 2009, Dimitris Xygalatas (at the Religion, Cognition and Culture research unit (RCC), Aarhus University, Denmark) spent some time conducting ethnographic research with the people of Pointe aux Piments, Mauritius. Mauritius is one of the most socially diverse societies on Earth, with a population entirely derived from immigration over the past 300 years and now comprising a mix of people with Asian, African and European ancestry and a mix of religions (50% Hindu, 30% Christian, 17% Muslim).

While he was there, he conducted a simple game of bargaining trust with the participants.

Along with collaborators, he told pairs of people (31 pairs in total) that they had a pot of money (500 rupees, equivalent to five days’ minimum pay of an unskilled worker). Each player could draw however much they wanted from the pot, and whatever was left over would be increased by 50% and split between the two players.

The catch is that, if the players together withdrew more than 500 rupees, they went bust and neither got anything. (At this point, it’s fun to consider how much you would withdraw from the pot!)

Now, the cunning part was that one of the pair was sat in a restaurant, while the other was in a Hindu temple. Each was just recruited off the street, and led on a short walk to either location – the experimenters communicated the results to each other over the phone. 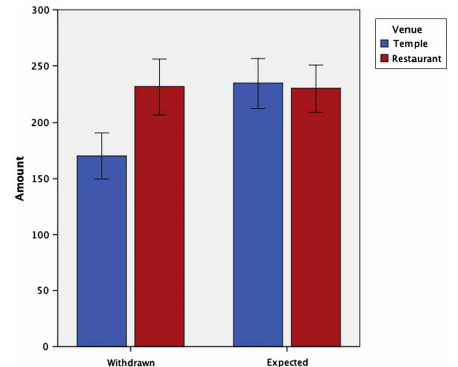 Now, the people in the two different locations were basically the same – a random mix of ages, sexes, ethnicities, and religions. And, even more intriguingly, both parties expected to receive the similar amounts in return (as you can see on the right hand side of the graph).

What this means is that simply putting someone in a temple makes them want to give more. But even more important is finding that they don’t expect more back.

When asked to justify their decision, Xygalatas says that:

So it seems that simply being in a temple, rather than a secular meeting place, triggers altruistic behaviour.

There’s several possible explanations for this result. It might be that a religious setting might trigger thoughts about  fairness and cooperation, or maybe the Hindu statues make people feel like they’re being watched. Xygalatas explains that both effects could work together.

Whatever the reason, this fits nicely with previous hints that the results you get from experimental studies of religion are exquisitely sensitive to the setting (see here for another example).

And it’s good to know that you get the same kind of effects among passers by in Mauritius as you do among college students in the USA!