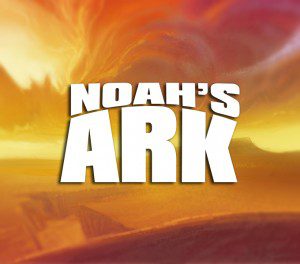 Unified Pictures announced today that John Stevenson, one of the directors of the original Kung Fu Panda, will direct an animated version of Noah’s Ark for them, and that the film will be completed two years from now, in 2016.

None of that is news, though, to anyone who has been following this film. Stevenson’s involvement with the film was first announced in March 2013, and Unified Pictures has been saying the film will be ready in two years ever since it was first announced in 2007. Maybe what’s new now is that Stevenson will direct the film by himself; today’s press release makes no mention of Cameron Hood, who was announced as co-director last year.

The press release also indicates that the story has been changed somewhat. Last year, the trade reports all said that the film’s protagonist was a meerkat, while the Unified Pictures website said it was someone named “Gilbert the Groundhog.” Well, as of today, the protagonist is still named Gilbert, but now he’s an aardvark — which leads me to wonder if the filmmakers were influenced at all by Aardvark Art’s Ark, an animated film that Casey Affleck pitched to Warner Brothers back in 2006.

The script, which was originally credited to Philip LaZebnik (The Prince of Egypt), is now credited to LaZebnik and Glen Dolman. Here’s the synopsis:

The story follows an outcast aardvark by the name of Gilbert, who becomes the reluctant leader of a ragtag group of misfit animals that need to be led to the mighty ark before the impending flood. Along their journey, they band together to conquer unforeseen obstacles, and ultimately, Gilbert discovers within himself the inner strength and ingenuity to prove that in a world of “twos,” he was truly destined to be “the one.”

As I’ve noted in the past, this is but one of several cartoons about Noah’s Ark — whether literal or quasi-allegorical — that have been in various stages of development or production lately. Other such films that I have noted here include:

At least two quasi-Noah-themed cartoons have been released overseas as well, in the last few years, and are now at least partially available online:

August 25, 2014 The Exodus: Gods and Kings - Lawrence of Arabia overlap
Recent Comments
1 Comment | Leave a Comment
Browse Our Archives
get the latest from
FilmChat
Sign up for our newsletter
POPULAR AT PATHEOS Entertainment
1