Living in a World Where “Nobody Says Hi Anymore” – A Review of J. Shepard Trott’s Novella 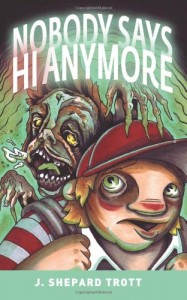 I hear feet. Sprinting feet. They are coming down the main street, they haven’t seen me…They are naked. They are dirty everywhere but around their mouths, where their tongues clean a circle. The only mess around their mouths is blood, which is mostly between their teeth with small flecks like freckles on their faces…Their bodies are gashed. Their zeal in pursuit produces these cuts, as they hurdle barbed wire fences and crash through doors with no thought to their health. Still, they are whole, moving at a full out sprint. They will be on me in a moment.

And with that, J. Shepard Trott’s Nobody Says Hi Anymore is off and running. Literally. This zombie viru-pocalyptic novella tells the thrilling tale of a society disintegrated into anarchy due to a virus that causes those infected to turn into blood-thirsty, cannibalistic monsters. Set in urban Philadelphia, the story centers on TC, the last of the uninfected in the “All Fucked Era.” As days turn into months, and months into years, TC lives, essentially, within his own conscience, a more aggressive beast than the savage creatures that rule the city. The memory of abandoning his new end-of-the-world family haunts him as he forms a plan to rescue a number of “VBs” from their wretched state and save humanity from the brink of extinction.

Throughout the story, TC’s personality rings true-to-life, especially if you know anything about Philadelphians. Tough yet caring. Aggressive yet sensitive. Tenacious yet empathetic. Passionate yet fickle. He embodies the kind of teenager to which so many of us can relate, especially those who have felt left out and unnoticed. Furthermore, TC’s evolution provides a shining example of how a jaded, out-of-shape kid from a broken family can rise to the occasion, even when confronted with greatest catastrophe the world has ever known.

Along the way, major Philadelphia landmarks are pictured in familiar detail and vividly described in a decayed state of ruin. Huge sections of the city are brought to life as this one young man attempts to navigate the vast urban terrain that now belongs to him and the infected who live on nothing but pure animal instinct.

Ultimately, this is a story about relationships and redemption. Because after all, what’s the point in being king of the world if you’ve got no one to share it with?

J. Shepard Trott wrote Nobody Says Hi Anymore out of many personal experiences. Having grown up rehabbing Philly houses with his father, he developed a passion for the city’s architecture and its diverse people. When it comes to this book, I believe the surface has only been scratched. I’m hoping to see this story expanded into a series, possibly with a prequel about TC’s upbringing and the cause of the virus, and perhaps a sequel showing the continuing saga of TC and co. as they work to save humanity and put an official end to the All Fucked Era! (*cough* just in case you’re reading this, Josh…)

His other published work is a fantasy novel, Illumen’s Children. He is currently working on an urban fantasy about teenagers with super powers entitled The Shining Mantle. I had a chance to read an early draft and found it both gripping and heartwarming.

Support this promising young author by picking up your copy of Nobody Says Hi Anymore today in print or Kindle!
Visit J. Shepard Trott’s author page on Facebook.
*cover design by Adam Smith

May 20, 2014
Joy in a Game Show: Interview with Jeff Foxworthy and Kirk Franklin
Next Post

May 27, 2014 The Most Underappreciated Work of Fantasy Ever – THE SILMARILLION – Part 3 of 4
Recent Comments
0 | Leave a Comment
Browse Our Archives
Related posts from The Rogue