Inspiration isn’t from within: My journey as an aspiring writer

Inspiration isn’t from within: My journey as an aspiring writer July 3, 2014 Melody Evans 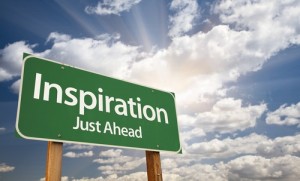 Earlier this spring, I was out driving aimlessly in the rain, during one of those rare times that I have the car to myself, gallivanting into the unknown down some winding country road with the music too loud and the windows cracked just enough to let the smell of damp earth transport me to a tranquil place. My thoughts, like my driving that day, had no real destination, only a great big world of what-ifs and endless possibilities. Reminiscing over past friendships and conversations, looking to the future and what it might contain, I experienced a profound moment, an idea came to me so clearly and sharply that I had to stop the car, pull over and just sit in awe for a few moments to enjoy it, hoping desperately to hold onto that thought. Inspiration. That’s how it happens for me. In the most random, nonsensical and whimsical places, a moment of clear and perfect thought, untouched by anything but my own will.

The need to go home and write swept me away that day, and most days ever since. But like all aspiring writers, those of us without

legitimate writing credits, the struggle to find a method to our madness is one of the first challenges we face. But it won’t be the last. I had a premise, quickly typed and shared with a few close people, because I was so insecure about this idea that I had, it felt so fragile. Like maybe it was something, but it was probably nothing… and yet I couldn’t let my idea go. Because just like real people in my life, I had already looked too deep into the psyche of my characters and couldn’t pull back. Brilliant but damaged people have always intrigued me, and so have these fictional people living in my head. I had to get to know them, their strengths and weaknesses and experience their pain, their joy. To breathe life, give substance to something that was incorporeal thought until I took the time to write it into existence in the tangible world.

I did that for several months, and then one day I just hit the wall. I sat down at the keyboard like always, and nothing came to me. The voices in my head grew silent. “Ye god, my muse, how have I angered thee?” Time and again I would sit down staring at the screen waiting for words that wouldn’t come. I wasn’t just blocked, I was completely devoid of inspiration. The overwhelming frustration, the hopelessness I felt, I still can’t put that into words. Was I going mad? Was I depressed? Was this normal in such a fledgling endeavor? I had no idea. So I started picking at things. Small changes, a tweak here or there. A change of verbiage. It didn’t help. The story remained silent. The once blazing glow of possibility had been reduced to a silent and all-consuming void.

Then I made probably the biggest mistake thus far in my writing. I walled up, closed 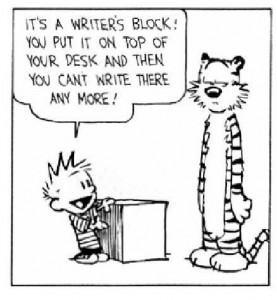 off and secluded myself away. I shut the door on anyone and everything that I began to see as a “distraction” from my writing. Then not only was I staring at a blank screen for hours on end, completely lost and frustrated, but no one came knocking to distract me to pull me out of it. So the endless staring contest with no hope of reward raged on.

I gave up. I felt as if maybe God had reached in to tell me “now isn’t the time, let go. Walk away and see where your feet take you.” I may be hard headed at times, but I listened. Giving up isn’t in my nature, but this was bigger than my will to see it through. So I walked away. I did other things. I had intensive theological debates with an old friend. I took pictures of anything and everything that crossed my path. I listened to some of the most beautiful music I’ve ever heard created by a friend with little more than a guitar and an amazing voice. And yes, I drove aimlessly in the rain down winding country roads. I connected and engaged with the great big world of possibilities again. Never fully abandoning the story, just not really giving it any more attention. I took a break, one that I didn’t feel I deserved yet, but who am I to argue with a deity?

Only recently have I sat back down. Looking inward, having an imaginary conversation with these fictional people in my head. I learned that it wasn’t my will, my own creativity that breathes substance into them. It’s the inspiration of existence they gain through my eyes. Like a kitchen sponge, I had wrung every bit of creativity out of myself without being re-saturated. The more I tried to squeeze out, the more desiccated my words became until there was nothing left. The life of a reclusive writer may be the stereotype, but it isn’t the standard. And it’s definitely not for me. I must see, listen, smell, touch and taste the world around me to be inspired. Then, when the words call to me, I’ll be ready and waiting to direct the flow where it’s intended. My epiphany stands thus: I’m not the instrument. I’m the messenger. Inspiration comes from the external world, the place that exists tangibly outside the walls I’ve built around my thoughts and emotions. Like the tides, inspiration comes and goes. The struggle is to remain open to it, even when it comes from the most unlikely of places, so that we may in turn pour it into something to inspire others.

Melody Evans is a Social Media Manager for a family of healthcare companies and a freelance book review blogger for Up All Night Novels.  When she’s not  forgoing sleep in the endless pursuit of literary satisfaction, she can often be found diligently glued to her keyboard, seeking new outlets to express her love of all things geek chic.

July 8, 2014 Salt Lake City Comic Con 2014: Arrow!!! WETA!!! HOWARD!!!! NAPOLEON!!!
Recent Comments
0 | Leave a Comment
""I must confess, I HATE Christian radio. There are always exceptions, but more than ever, ..."
Krysia Berdinski DeGraaf Christian Music’s Authenticity Problem (or How ..."
"That's right my man. (Sorry to resurrect an old article) but it's still true. It ..."
▌Đeparture ▌ Christian Music’s Authenticity Problem (or How ..."
"We both share the same dilemma. We embrace our understandings of the Gospel and, therefore, ..."
JOB2001 Why Reformation Day is Dumb…
"Sorry for jumping to conclusions without knowing you! Regarding your dear aunt's fear, one should ..."
Truth Why Reformation Day is Dumb…
Browse Our Archives
get the latest from
Entertainment
Sign up for our newsletter
POPULAR AT PATHEOS Entertainment
1