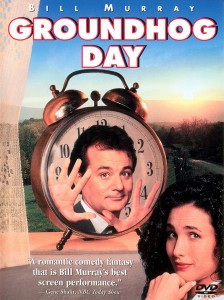 Her ideal man is handsome but doesn’t know it, brilliant but unassuming, successful and kind. So says Rita (Andie MacDowell) to Phil (Bill Murray) in one of the greatest movies of all time, Groundhog Day.

But don’t we humans tend to get weirder the more successful we get?

Whatever our field of work is, we know “success” when we see it. And we may perceive that career success is sometimes accompanied by some annoying habits. If you work in the writing and filmmaking universes like I do, you may have experienced the following mysterious behaviors:

1) I make so much money I can’t afford to do low-paying work.

This is kind of a hilarious paradox. Obviously there’s good reason for this—people need to value their time as they see fit and that value will probably go up as their skills do. But when they were broke and there was a cool project to do, I bet they never imagined that having plenty of money could be a reason not to do it.

2) I have so many fans I can’t possibly share them.

Once upon a time I invited a famous creator of beloved works of fiction (see how anonymous I’m trying to make this?) to join a panel at a big nerd convention. We had been co-panelists at a previous gig and had a grand ‘ole time. But this time around, this person couldn’t make it work unless he/she had an audience all to his/herself. Again, I get it. You’ve got limited time and specific goals with your audience. But come on!

3) The only worthwhile collaborators have advanced beyond where I used to be.

The indie artist has finally hit the big time and is forced to leave his/her struggling former colleagues behind because their talent seems dim compared to the his/her new group the luminaries—the luminaries he/she used to scoff at. The rising star has forgotten from whence they came.

4) My buddy never would have made it without me.

A cousin of #3… The magnanimous rising star actually believes that the success of his/her friend is due to themselves because they made a connection or opened a door.

5) You need to pay your dues to get where I am.

How fondly I remember the TV Studio exec who dangled a lucrative contract before me while I slaved a way on a show for him/her, and after its success he/she felt totally justified in yanking the contract away!

Am I exaggerating/embellishing these scenarios? (Well, maybe a little.) Do “successful” people really need to chill, get real, remember how much luck and help they had, and humbly pay it forward? (Yes, many do indeed.) But is this really just a rant, borne of bitterness? (Read on…)

…making a living doing what I love to do. At least that’s how I look at it. I can safely say that I have not achieved career success according to my own definition. I flatter myself that I’m only a hop, skip, and jump away.

A long time ago in a galaxy far far away, I had a phone call with a former film school mate—who only a couple years out of school was in Hollywood working with a major producer with all kinds of fancy projects cooking. Before I knew what I was saying, I found myself pathetically justifying to him why I was still in nowhereville doing nothing cool. I cringe to think about how lame I must have sounded.

And how many times have I been at parties blathering about how busy I am to make sure everyone knows I’m just on the threshold of “making it”?

Any how many successful people have we seen simply as tools to get us where we want to go?

The cheesy but true reality:

“Successful” and “not-yet-successful” people are in exactly the same boat… they are afraid and need to be loved. But if we wait until we are successful to “get real,” I think we may be in for a much harder ride.

Probably the most professionally successful person I’ve ever talked with—one of the most beloved science fiction authors in the world—shocked me with her sweetness and down-to-earthness as we were talking about possibly collaborating on a film project. I was twitterpatedly telling her what an honor it was for me to be chatting with her when she said: “Well gee, I’m in the phone book.”

I have to assume that her road to coolness and humility began long before she arrived at her first Hugo or Nebula award.

I started writing this post because I was annoyed at some of the things I’ve experienced from weird “successful” people, but the brilliantly successful folks who made one of my favorite flicks helped me to get over my not-yet-successful self and give them a freakin’ break.

PS. But when I am a big fancy star and I’m acting like a jerk, don’t be so weird y’all—call me on it!

And now that I’ve lured you to the end of this post… I’ll shamelessly invite you to sign up for updates at my website where I’ll be announcing my new movie project soon, and to my twitter account where I’ll be doing a big giveaway of incredible Silmarillion art!