7 Dangers for Missionaries from Guilt-Innocence Cultures

A recent post on TGC warns against the dangers of becoming imbalanced when serving in honor-shame cultures. Jayson Georges’ exceptional response is a must-read.

He replies via three main points:

If you have not seen Jayson’s post, it’s worth reading just for the sake of the comic he uses.

Are Westerners Guilty of Under Correction?

The TGC writer, Elliot Clark, lists “5 Dangers for Missionaries in Honor-Shame Contexts.” His purpose is to “protect us from unhelpful overcorrection.” He worries “the proverbial pendulum can swing too far” towards honor-shame thinking. Jayson’s post aptly addresses these concerns, so I will offer a different approach.

In the interest of “balance,” I will offer 7 dangers for missionaries from guilt-innocence cultures. They will loosely correspond to Clark’s “5 dangers.”

Western missionaries routinely miss a fundamental aspect of sin. At its core, sin is a failure to honor God, i.e. reflect his worth. Writers use numerous metaphors to describe sin.

Clark rightly states that the Bible uses the law metaphor as a way of discussing sin. He overstates the case when he says, “John succinctly defines sin as lawlessness.” First John 3:4 says “sin is lawlessness.” If I say, “Sarah is a mother,” I have not defined “Sarah.” I have described one aspect of her identity. Likewise, “lawlessness” is only one way of describing sin.

You who boast in the law dishonor God by breaking the law. For, as it is written, “The name of God is blasphemed among the Gentiles because of you.”

Clark unwittingly concedes a key point. The clause “by disobeying” is not the essence of the problem… dishonoring God is the core problem. The means or way someone can dishonor God is through disobeying him.

Even John Piper, a founding leader of TGC, routinely explains sin in terms of glory and honor. For instance, in a long list of descriptions, he says sin is where “the glory of God [is] not honored”[1]

Can people “obey the law” yet sin? Piper considers the case where someone obeys the commandment against adultery.

If not committing adultery comes from a heart that has no love for God and treasures many things more than God, that act of chastity is not an expression of love to God. It’s not a way of expressing his value. And so it is a dishonor to God. He is neglected, ignored, not a decisive factor, and in that sense the fruit of that heart is not good.[2]

This leads us to consider the problem with his first comment, “When Adam failed to honor God, he transgressed the law.” Western missionaries are prone to read the word “law” into every context where disobedience is mentioned. The problem here is layered.

First, did Adam break God’s “law”? The text of Genesis never explicitly uses legal language with respect to Adam. In the Old Testament, “the law” refers to capital-L “Law”, i.e., the Mosaic covenant, which did not exist during the time of Adam. Obviously, Adam could not have “transgressed the law.” The only way we can say Adam broke God’s law is if we read legal language back into the text.

Laws are rules, but rules are not necessarily laws.

What if we used the metaphor of “father” to describe God in Genesis text? In the context of family, one does not say a child “broke the law” of the family. The child disobeyed, but we only use “law” language a public, legal context. In Genesis, “Father” language is every bit as legitimate a legal language (cf. Acts 17:24–29).

While never setting metaphors against one another, we also should not exclude a legitimate biblical metaphor.

Western missionaries often forget (or never learn) that the Mosaic Law was Ancient Near Eastern covenant Law. It was not a law is the modern sense of the term. Covenants served diverse functions, such as defining the identity of a people and the obligations of those making covenant. Covenants are highly contextual in nature; they are not timeless, abstract laws.

Yet when people forget this observation, Westerners are likely to reduce God to the role of “judge” and under stress the fact that God is king. Remember, a king is a judge, but a judge is not necessarily a king.

Clark and others want us to remain balanced in our theology and practice. So do I! Clark says,

Just as the West has been blind in many ways to the significance of honor and shame in Scripture, we can make a similarly egregious error in Eastern cultures if we ignore concepts of law and guilt.

I would be curious who Clark has in mind. Who suggests we ignore law and guilt? I imagine he simply wants to remind us not to ignore law and guilt lest we lose balance. Yet in the trying to preserve balance, writers can perpetuate the imbalance in favor of guilt-law to the neglect of honor-shame.

Rather than get nervous about our blind spots, we need to look directly at them to gain a well-rounded picture of the world.

I agree with Clark–– we don’t want any particular set of cultural values to trump Scripture. That is called “cultural syncretism.” Whereas Westerners tend to worry most about syncretism with “Asian,” “African,” or “Indian” cultures, they rarely seriously reflect on ways that our theology is influenced by Western culture. How might our thinking veer towards syncretism?

Likewise, we must also guard against the dangers of theological syncretism. By this I refer the kind of syncretism that occurs when we let our denominational subculture trump the biblical message. This happens when our church subculture mutes certain parts of Scripture or filters its interpretation through a strict grid of its own history.

Does this happen in Western Christianity?

Clark argues that “guilt-innocence paradigms…have a place in our discipleship.” I agree! However, he runs the risk of compromising a robust view of discipleship by settling for a merely true fact.

Yes, we should include guilt-innocence concepts. Guilt concerns right and wrong actions. On the other hand, honor-shame involves our identity, not merely one’s actions. While our actions shape our identity, they are not the only factors that determine who we are.

Being a disciple is about identity. It concerns our being in Christ, having a relationship with God, belonging to the Church, God’s family from among all nations. If we ignore honor and shame, we misrepresent and compromise biblical discipleship.

We must never downplay the law of Christ or the centrality of obedience as his disciple. If a host culture diminishes disobedience or lacks categories for transgression, the solution isn’t to sidestep the issue. It’s to teach believers that to honor the Master means to follow in his steps.

We ought not forget that people from all cultures dishonor God and fall short of the glory of God. 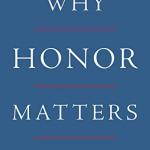