What would Jesus do if invited to a gay wedding?

What would Jesus do if invited to a gay wedding? May 7, 2013 John Shore 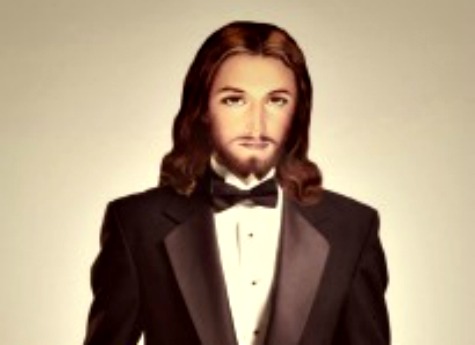 I’ve recently been invited to a couple of gay weddings. So—what with being Christian and all—I asked myself the famous question, “What would Jesus do?” (Which I don’t too often ask myself, actually, since Jesus could, for instance, raise people from the dead and turn water into wine, whereas I can barely drag myself out of bed in the morning and/or turn water into coffee. Safe to say many of His options are none of mine.)

Wondering what Jesus would do if he were invited to a gay wedding naturally led me to the New Testament. And therein I found these quotes from Jesus himself:

Woe to you, teachers of the law and Pharisees, you hypocrites! You give a tenth of your spices — mint, dill and cumin. But you have neglected the more important matters of the law — justice, mercy and faithfulness. You should have practiced the latter, without neglecting the former. You blind guides! You strain out a gnat but swallow a camel. [Matthew 23:23-24]

Woe to you, teachers of the law and Pharisees, you hypocrites! You shut the kingdom of heaven in men’s faces. You yourselves do not enter, nor will you let those enter who are trying to. [Matthew 23:13]

Woe to you, teachers of the law and Pharisees, you hypocrites! You travel over land and sea to win a single convert, and when he becomes one, you make him twice as much a son of hell as you are. [Matthew 23:15]

When I next went looking for anywhere in the Bible where Jesus says anything—and I mean anything—about homosexuality, I found virtually nothing. Of course, it’s entirely possible that Jesus did say many crucially informative things about homosexuality, but that when he did no one around him happened to have handy an ostrich feather, sappy stick, or whatever it was they used for pens back then. Which would make sense, actually. If you’ve spent any time at all reading the New Testament, you know that Jesus’ disciples weren’t exactly Johnnies-on-the-spot. They were just normal, everyday guys.

Which I think is kind of the whole point. Jesus sure did love him some everyday people.

Throughout the New Testament, the only kind of people with whom Jesus consistently takes frightful exception are the very “teachers of the law and Pharisees” whom we see him dressing down in the passages above. One thing that often gets lost in our ideas about Jesus is the degree to which he is exactly the wrong person to piss off. And you don’t have to spend a lot of time in the New Testament before you understand that the only kind of people who seem to ever truly anger Jesus are those who put religious dogma above what he most clearly stood for, which was God’s love.

Around Jesus you can whine, lie, shift your loyalties, be late, be greedy, be too ambitious, be stupid, be a coward, be a hypochondriac, constantly complain, fall asleep at every wrong moment—you can do nothing right, and it won’t in the slightest way seem to offend him.

But you put dogma ahead of love? You transmogrify God’s law into a justification for denying God’s love?

Then yikes, man. Then you’ve got yourself a problem no one in this world wants.

I’m not sure how exactly we came to so often consider Jesus the soft and dreamy, namby-pamby type. (Not that there’s anything wrong with being namby-pamby! I have an uncle who’s namby-pamby!) But it’s hard to believe that it came from the accounts of Jesus that we have in the Gospels. That’s just not the guy on those pages.

Jesus is scary when he’s riled. And the only people who rile him are those who, in his own name (what with him being God and all), set themselves up as sanctimonious judges of others.

I think I better go to the weddings of my gay friends. I’m scared not to. While it’s certainly true that in many of his parables it’s unclear what exactly Jesus was saying or meant, he didn’t even almost waffle about his “Love your neighbor as yourself.” In conjunction with “Love the Lord your God with [everything you’ve got],” he very explicitly declared that to be the greatest commandment, the one upon which hangs “all the law and the prophets.”

How in the world am I supposed to argue with that? Talk about having God eliminate your options.

So you bet I’ll attend my gay friends’ weddings, in the exact same spirit my gay friends once attended my wedding. And if it happens that in the course of either of my friends’ weddings or receptions I find myself wondering if I’m doing the morally correct thing, I’ll be sure to remember the first miracle of Jesus’ recorded in the Bible. I’ll remember what he did do.

May 10, 2013 A Methodist to Their Madness
Recent Comments
232 Comments | Leave a Comment
Browse Our Archives
get the latest from
John Shore
Sign up for our newsletter
POPULAR AT PATHEOS Progressive Christian
1

A Few Things We Can Learn From The...
If there is a show better than The Office, I've yet to...
view all Progressive Christian blogs
What Are Your Thoughts?leave a comment

232 responses to “What would Jesus do if invited to a gay wedding?”