How bad can Christian education get? This bad.

What’s worse than an ACE school?

I recently bought a pile of second-hand Accelerated Christian Education English workbooks (PACEs—Packets of Accelerated Christian Education) from eBay. At the time, the fact they were used didn’t seem particularly relevant—it was just a chance to buy them cheaper. But it turned out that what the students and teachers have written in them—and what they haven’t written in them—is even more illuminating.

When a school signs up to teach the ACE curriculum, they receive a copy of the ACE Procedures Manual. In return for some training and a discount on the curriculum, schools agree that they will follow these rules exactly. It turns out not all ACE schools keep their side of the bargain. We’ve already heard from JP, who described the chaos at her school. From the evidence in the PACEs I’ve purchased, at this school the staff barely paid any attention to the students.

In order to make sense of this, you need to understand something of how ACE works, so this will serve as an introduction for my new readers.

In ACE, there are no ‘teachers’, per se, but there are supervisors. Students work individually and in silence through their workbooks in cubicles, or ‘offices’. If they need assistance, they raise a flag to attract attention. Otherwise, there is no interaction between students and staff while the students are working on their PACEs.

After the students have completed a page or two of a PACE, they will come to a score strip, which looks like this:

Once the student reaches a score strip, they raise their flag to obtain permission to leave their seat. They then go to a score station, where they will compare their answers with the correct ones found in the answer book, or ‘score key’.

If all the answers are correct, fine. If not, they return to their office and repeat the process until everything is correct.

If you think this system will stop kids cheating, you clearly don’t have much imagination. But at the school which supplied my secondhand PACEs, that was the least of the problems. The PACEs I bought were all from ACE’s sixth and seventh grade English curriculum, so that’s where all these examples come from.

In this PACE, the student just hasn’t bothered to mark any of their work, and the supervisor hasn’t noticed. This is evident from the fact that all the score strips are blank, there are no red pen marks anywhere in the PACE, and there are dozens of apparently unnoticed incorrect answers. In this one, for example, the student has been asked to write a verb in different tenses, and got all three answers wrong. 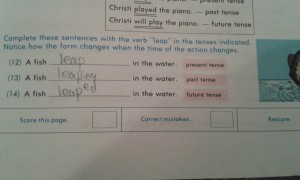 This student also hasn’t bothered to do any marking, but they’ve put a cursory slash in the “score this page” box in pencil, a kind of sheepish acknowledgement they were supposed to. I kind of prefer the previous student’s chutzpah in just ignoring the whole damn thing.

This next student clearly has marked their work, and got plenty of things wrong. But they’ve also done their corrections in the same pen they used for marking. It looks like they simply copied the correct answers from the score key while they were marking. I don’t blame them—the ACE routine of returning to your seat to make corrections was always a farce—but with a method like this, there’s no evidence about whether the student actually understands or will remember the lesson. 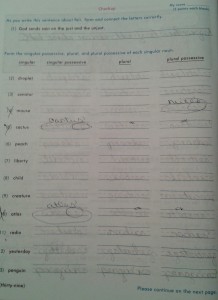 At the end of each PACE, the student takes a test. This is the one part they’re not supposed to mark themselves—supervisors mark tests. It turns out the standard of marking isn’t much higher when supervisors are in charge. In this picture, the supervisor has marked #20 wrong, but missed the mistakes at #17 and #19. There were other unnoticed errors elsewhere in the test, too. 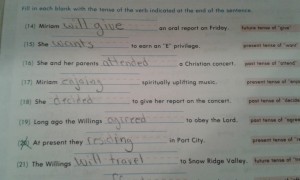 On this occasion, it seems a student has been allowed to mark their own test. For this question, they had to write a letter. It’s a disaster. Apart from the near-illegible handwriting, there’s no address, no date, no formal greeting, no closing, and no name.  The test score on the front is written in the same handwriting as the rest of the test. The score? 100%, of course. This student is doing sixth grade work, and their work is this standard. Do the staff even know? The only supervisor’s signature on this test is at the start, indicating the student had permission to take it.

There are occasional pages where the student has to get a supervisor’s signature before continuing. Usually, this is where there’s a question with more than one possible right answer, so it can’t be marked from a score key. In nearly all of these PACEs, there is no staff signature to be found. One or two have been ink-stamped with a Bible verse, but most are just blank. This student, for example, clearly doesn’t get what a proper noun is (and appears to think Texas is a city). Note the blank box for a supervisor’s initial. 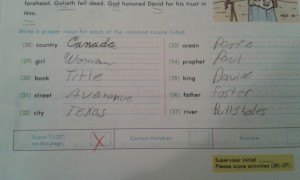 Here’s another student not getting it. They’re supposed to write questions using the supplied adverbs. Three out of four sentences are not questions, and do not feature the required adverb. This student seems to struggle with comprehension. WHERE ARE THE TEACHERS? 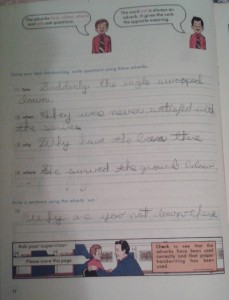 In this case, the student has just gone “fuck this shit” to the one actual writing exercise in the PACE. All the other questions are fill-in-the-blank or underline the correct answer. This is the only opportunity to demonstrate writing—you know, to do English—and the student hasn’t done it. No one has checked. 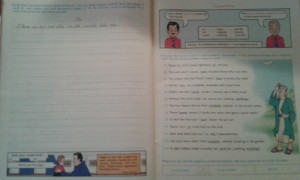 Mind you, maybe it wouldn’t make much difference if someone had checked. Here, the student has been asked to write sentences that feature prepositional phrases. I’m not convinced this is actually a useful writing exercise, but if you’re going to bother at all, you should probably do it right. The last sentence “Wags has buried bones underground” does not include a prepositional phrase. For once, a supervisor has initialed to approve the work, apparently not noticing this mistake. Quite probably, the supervisor doesn’t understand prepositional phrases either. 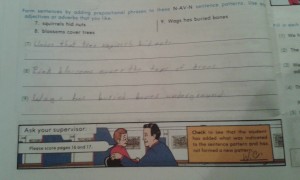 Elsewhere, there’s a question asking the student to write a question using the word “whom”. They’ve written “To whom shall I say is calling?” This sentence makes no sense (and removing the initial “to” would not fix the problem). The supervisor has signed off on it.

Here’s another example of how ACE’s marking system lets kids down. Here the student had to write a four-sentence paragraph. You can see someone has looked at it (the comment underneath is in different handwriting), but the only comment is “only 3 sentences”. What about the standard of the writing? What did the student do well? What could they improve? Of course, we don’t know what (if anything) was fed back to the student verbally, but there’s a lot more to judging the quality of a paragraph than its length. 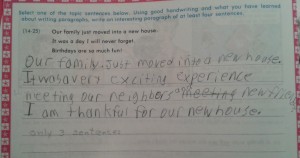 Finally, here’s a different kind of tragedy: a good student. This is still a sixth grade piece of work. Compared to their classmates, this student is a genius. Here are three good paragraphs in clear handwriting. Somehow, in amongst this morass of educational negligence, we have a student exhibiting real potential. They need to be praised for this work, and they need to be pushed to do even better. So what do they get? 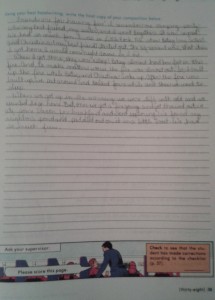 You guessed it, nothing. No signature. No supervisor has read this.

I expect by this point you’re feeling anger at the negligence and stupidity of these teachers. Good. You should be. Others of you may be thinking “This is not ACE’s fault. ACE just supplies the curriculum. They can’t be blamed for how it’s implemented.” But actually, ACE’s actions from day one have made this scenario more likely. The mark-it-yourself scheme was always going to result in student cheating—if you can cheat without getting caught, the system actually rewards you for it.

ACE has always campaigned against state certification for teachers in its schools. It has argued that any form of licence from the state would be blasphemy. Since God has commanded them to start schools, according to ACE, allowing any government official to approve the school would imply that the government is a higher authority than God. The result has been that there is not a single academic requirement to become a supervisor in an ACE school, beyond the five days of internal training that ACE supplies.

In Rebirth of Our Nation, ACE’s founder Donald Howard wrote about relationships between Christian schools and the state. In his not-very-subtle metaphor, Christian schools are the children of Israel, and secular society is Egypt.

Pharaoh (the state) requests a mixing or interaction or exchange to interrelate with the church in order to maintain control. “Let us train your children or if we cannot train them worship with us; let us work with you. Let us write rules and regulations for your ministries, let us certify your teachers and workers, let us license your ministries, — your day care centers, — your nurseries, — your schools, — you bend a little and we’ll bend a little.

[Yes, that is how it’s punctuated in the original]

Then we’ll both be crooked. That simply is not God’s way for the church. Separation is a Biblical imperative. With the church’s obedience and the mushrooming Christian school movement, there has been a parallel growth in conflict. The church says, “let our children go; we will build Christian schools and train our own children in the principles of God’s Word.” And Pharaoh responds, “if you will not let us have your children, then we will control the objectives and programs of your schools through teacher certification, through writing the standards for your school, through prescribing the philosophy and methodology, and by licensing or determining whether or not you can exist.”

According to Howard, teaching qualifications that come from “Egyptian universities” are not worthwhile because they are polluted by “humanist” philosophies. Instead ACE offers its own (minimal) training and ‘school inspection visits’ to regulate schools. It’s rather like the Home School Legal Defence Association, which insists that (Christian) home schooling must be entirely unregulated and instead ‘self-policing’. Libby Anne and Homeschoolers Anonymous have done a valiant job cataloguing the multitude of ways the HSLDA has failed in that self-policing. Similarly, it seems ACE cannot be trusted to maintain standards in its own schools.

I bought all the PACEs from the same supplier—this is just one school, and I’m not making any claim that this is typical, much less that all ACE schools are like this. But clearly they can be this bad, and ACE’s own actions have made that possible.