What I Learned in College

Patheos Explore the world's faith through different perspectives on religion and spirituality! Patheos has the views of the prevalent religions and spiritualities of the world.
College was incredibly important for me. It gave me room to learn, grow, and try out new ideas. It gave me space and freedom. It gave me acceptance and encouragement. It gave me new information I had never heard of. In this post, I will explore what I studied and learned in college.
One way in which college was very eye opening to me was that it allowed me to interact with people from a wide range of different backgrounds. I met Episcopalians, agnostics, and people who were gay. I met people from different countries and cultures. I learned that people who are different from me are still caring people with happy fulfilling lives. I suppose I got a big dose of multiculturalism, and that changed me. I found it harder and harder to think that my beliefs were right and theirs were all wrong.

This class did something more, though. It helped me historicize the rise of the New Right and revealed its racist and classist origins. I suddenly saw the religious right (and the New Right in general) as a problematic social phenomenon rather than as unchanging truth or as a Biblical injunction. Furthermore, I learned about the New Left of the 1960s and read its Port Huron Statement. I could not understand how a movement which embraced such ideals as democracy, equality, and global brotherhood and fought to end poverty, racism, materialism, militarism, and exploitation could be evil or selfish as I had been taught. At this point, I aligned myself solidly with the political left and left the right behind forever. This transition was aided by the fact that I had already taken the class on modern Europe one semester before, and had there lost my fear of socialism.

I didn’t end up getting a degree in education. Instead, I became more and more intrigued by the humanities and social sciences, especially as I began to have issues with my parents, and so I moved in that direction. I was fascinated by trying to figure out where my parents and their beliefs came from. I wanted to figure out where I came from. I wanted to understand who I was. The humanities and social sciences helped me do this, and I found that invigorating. College for me was about figuring out who I was and what I believed. I am incredibly thankful my parents sent me to college. Unfortunately, they didn’t like the changes they saw in me and ended up decided they’d made a mistake to send me at all. Rather than seeing me becoming my own person, they saw me being ruined and led astray by worldly teachings. Based on my experiences, it’s really pretty easy to see why organizations like Vision Forum advise against sending daughters – or even sons – away to college.
Previous Post

September 12, 2011 I am not a "Good Atheist"
Recent Comments
0 | Leave a Comment
Browse Our Archives
Follow Us!

Nonreligious
Pulling Down Statues Is Not the Same as...
Love, Joy, Feminism 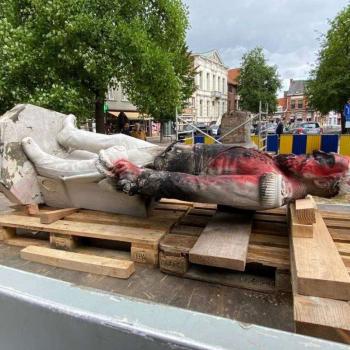 Nonreligious
A Tale of Many Statues
Love, Joy, Feminism
TRENDING AT PATHEOS Nonreligious

Michael Pearl's Confusing Take on Christianity & Updates...
I'm still reading through the July/August No Greater Joy magazine. The very...
view all Nonreligious blogs
What Are Your Thoughts?leave a comment
Copyright 2008-2020, Patheos. All rights reserved.