Vision Forum just sent out it’s 2012 catalog. (Sidenote: I find it incredibly insidious that Vision Forum is not simply a church or a theological organization, but rather ropes in adherents by selling them pretty toys and beautifully packaged books and CDs.) Here it is:

Makes me think of this image from the front page of the Vision Forum website:

Because when I think of lions eating Christians, the first thing I think of is hope! Or not.

Regardless, the cover of the 2012 catalog simply documents Vision Forum’s continuing Titanic worship. Doug Philips holds the Titanic up as the high point of Christian bravery and chivalry. Here, for example, is an excerpt from a blog post he wrote on the issue in 2005:

This April 15, Vision Forum Ministries will celebrate in Washington, D.C., the tenth anniversary of the Christian Boys’ & Men’s Titanic Society with a gala event. The Society is dedicated to advancing the biblical virtue of men sacrificing for women and children. In an age of androgeny-blessing preachers, an androgenous military, androgenous dress standards, and a general androgenous approach to culure, the horror of a world which does not embrace “women and children first” is becoming more evident. To see the consequences of abandoning biblical patriarchy, one need only look to the bed of Terri Schiavo, see the implications of the sexual liberation of women tallied in the death of unborn babies, watch the body bags of female soldiers carried back from Iraq, or observe an entire lost generation of promising young women who have exchanged their birthright as women of virtue and daughters of the King, for a mess of feminist pottage. All this on our watch.

In our view, the story of the Titanic is a helpful vehicle for contrasting the the imperfect, but largely Christian ethic of premodern world with the present. By setting the best stories before our sons and daughters, we hope to offer them a perspective they will never receive drinking from the morally-repugnant font of Hollywood media elites or the evolutionary values of the priests of government education.

Yes, Vision Forum has a Christian Boy’s & Men’s Titanic Society, and yes, they hold annual banquets to mark the date. Yes, they consider the Titanic one of the “best stories” to set “before our sons and daughters.” Which is funny, because I don’t tend to think of the Titanic as a “good story,” and when my daughter learns about it it will be as a tragedy and not something to be celebrated.

What remains in the place of all this is an event to be celebrated with annual galas, a monument to the hierarchical order of a bygone era.

But then, it’s not like the above picture shows anyone in steerage, does it? 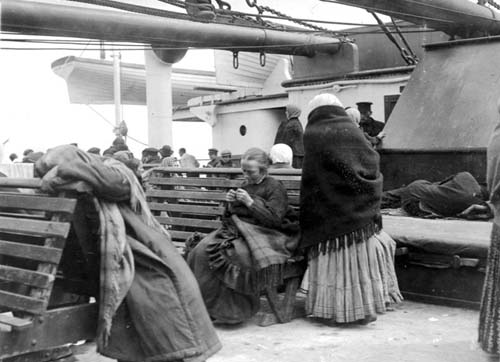