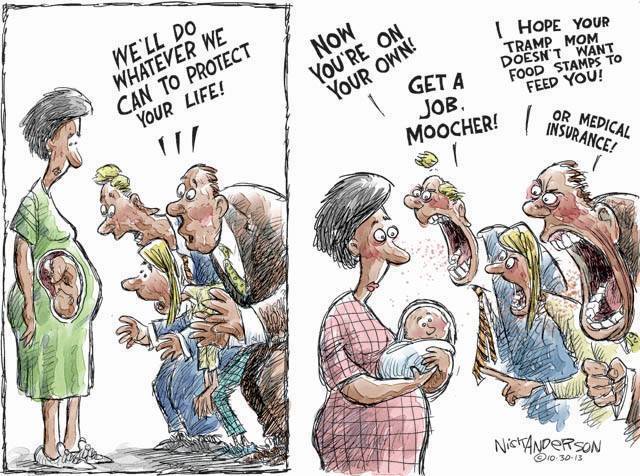 I remember when Mitt Romney became incensed that anyone would say that his homemaker wife had never “worked” even as Mitt Romney himself had argued that poor mothers shouldn’t be allowed to stay at home on the dole because they needed “the dignity of work.” I also remember Mitt Romney both wanting to pass a personhood amendment that would ban abortion and simultaneously blaming gun violence on single mothers. One of the reasons wrote my viral post about losing faith in the pro-life movement was that I had become completely and utterly disgusted with this very dynamic.

The stigma surrounding being an unwed mother, a single mother, or a poor mother is real, and this stigma contributes to women in these situations choosing abortion. The dominant narrative of the political conservatism in this country urges the unmarried, single, or poor pregnant woman not to “kill her baby” and then calls the unmarried, single, or poor mother lazy, selfish, and irresponsible, and then blames society’s ills on her. There is nothing that is “pro-life” about this narrative.

My only quibble with this cartoon is that the image to the left is not representative of the stage at which the vast vast majority of abortions take place—the first trimester. Indeed, by the time the pregnancy has advanced as far as the one in the image, many conservatives have commenced complaining about the fact that the medical needs surrounding the pregnancy, labor, and birth may well be covered by Medicaid.