How Not to Address Marriage or Child Abuse

I recently came upon an image posted on facebook by homeschool mom, speaker, and writer Heidi St. John. I’m not sure what’s more disturbing—this image, or that none of the moms commenting on it saw this image as disturbing. 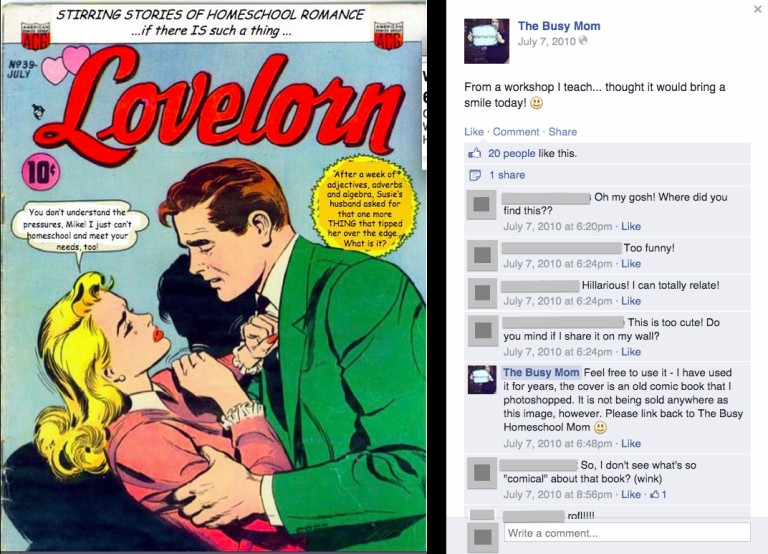 The image is photoshopped from an old comic that depicts an employee sexually assaulting his “frigid” boss (see here and here or view the full comic here). Sure, one could try to argue that the image has been removed from that context, what with the new words in the bubbles and all, but that fails given the tear on the woman’s cheek and the fact that she is clearly trying to fight the man off (notice her pounding fists). Whatever the words, the image clearly depicts a woman futilely trying to fight off a stronger man’s advances. In fact, in the context St. John provides the image, it appears to be depicting attempted marital rape. Heidi St. John runs The Busy Mom blog and holds retreats for homeschooling moms. She and her husband run several ministries, including Firmly Planted Family and Firmly Planted Co-ops, which has member co-ops across the country and offers a workbook on how to make sure your homeschool co-op is “firmly planted”. St. John is also the author of The Busy Homeschool Mom’s Guide to Romance, among other books. The author’s blurb is as follows:

Homeschooling offers parents the best opportunity to shepherd their children both academically and spiritually. Yes. It’s worth it. But do you ever feel as if your life is all homeschool all the time? Do you ever wonder where the girl your husband married went? This book is for every mom who has collapsed into bed at the end of the day, looked into the eyes of her husband and promised tomorrow, she’d have time for him. Trouble is, tomorrow finds her more exhausted than the day before. If you have ever felt caught between the demands of homeschooling your children and meeting the needs of your husband, you’re not alone. Read and discover how even a busy homeschool mom can make time to nurture her marriage. It s not as hard as you think and more important than you may realize. Pre-order your copy today!

I am sure St. John has some genuinely good advice. The Amazon reviews of her book (which I have not read) speak of chapters on things like household organization and “me time.” My concern with St. John centers on two things: first, her use of the comic book image makes me concerned about what she teaches regarding sex and consent, and second, he treatment of HA and HARO on her facebook wall makes me concerned about how her homeschool co-op ministry addresses (or does not address) things like abuse or neglect. First, the comic book image. The trouble is that an image like this, in the Christian homeschooling community St. John is very much a part of, arrives in a context already influenced by writers like Debi Pearl and the teachings of Bill Gothard and others. These leaders explicitly teach that a wife should never say “no” to her husband’s sexual advances. These leaders do not recognize the existence of marital rape, because they see sex within marriage as the husband’s right. Coming in this cultural context, St. John’s image is not “funny.” It’s a problem. It normalizes coercion and marital rape. Second, St. John’s treatment of HARO and HA. Last week St. John posted a defense of HSLDA on her facebook wall, and several homeschool alumni who had mutual friends with her left comments sharing their stories and trying to explain their concerns with an organization that defends child abusers and elevates parental rights while denying that children have rights. St. John’s responds was this: 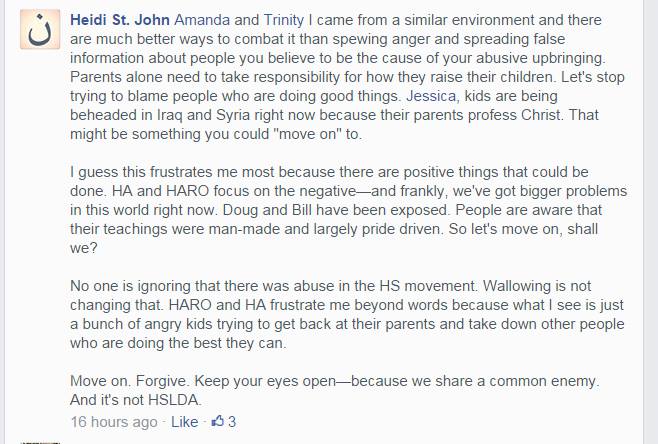 St. John’s response to abuse in the homeschooling environment is “we’ve got bigger problems in this world right now” and “move on.” She calls homeschool-alumni-turned-reformers “a bunch of angry kids trying to get back at their parents.” This should not be acceptable. I’d like to see St. John reach out to member co-ops with information on recognizing and reporting abuse and neglect, perhaps using resources developed by HARO or CRHE, but her response here suggests that she doesn’t see this as a priority. Instead, she’d rather stick with praising HSLDA and condemning homeschool alumni who point out that HSLDA’s policies protect abusers (which they do). My concerns here are much, much bigger than Phillips and Gothard. Those two leaders have gone down in scandal, but they were never the center of my concerns. The valuing of belief over people, the glossing over things like consent, the minimizing of the need to protect children—these are things that concern me, and St. John reminds us, once again, that these things haven’t disappeared with Phillips and Gothard.
Previous Post

September 2, 2014
Why It Matters That Farris Strawmanned Patriarchy
Next Post

Nonreligious
Someone Is Missing from This Table...
Love, Joy, Feminism
TRENDING AT PATHEOS Nonreligious 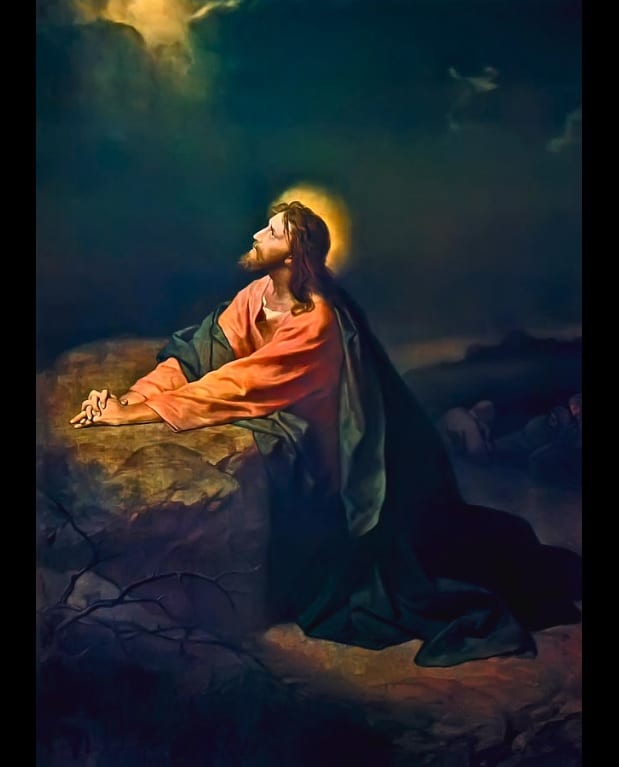 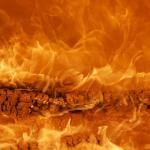 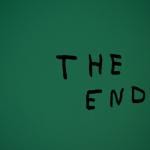