On the Duggars and the Locus of Outrage

On the Duggars and the Locus of Outrage November 21, 2014 Libby Anne

I recently received the following email:

I’m a long-time reader of your blog, so I know you occasionally write about the Duggar family. Well, recently I heard about a fairly popular petition to get the show “19 Kids and Counting” cancelled. Maybe you have also heard this, but if not, here is one news story about it:

Supposedly, this was due to comments they made against gay marriage. Perhaps you were already planning on doing a post about it. Either way, I (and probably others) would be curious to know: what do you think about this? Should TLC cancel the show? Are people calling for its cancelation for the right reasons? Is this a good opportunity to bring other harmful ideas promoted by the family to light?

Curious asks some very good questions, questions that have been percolating since I first heard about the petition a few days ago. So let me walk you through my current thought process.

Yes, the Duggars are homophobic. They are also incredibly sexist, carefully limiting and curtailing their daughters’ dreams. The Duggars have long supported cult-like organizations run by men who sexually harassed and molested teenage and young adult girls in their employ (Doug Phillips and Bill Gothard). Actually, the Duggars continue to support and promote one of these organizations (ATI), which has jettisoned its founder (Bill Gothard) but is run by the same leadership that spent decades covering up his sexual offenses.

The Duggars have for years promoted child rearing books that require parents to “break” their children’s wills and to shun “rebellious” adult children. They don’t allow their adult children to so much as go shopping without an “accountability buddy,” and don’t allow their adult daughters to text significant others without having a parent in on the conversation. And lest you think the adult children opt into this system entirely out of their own free will, did I mention the shunning “rebellious” children bit? That would be what this is about.

And have I even gotten to the question of what the Jim Bob and Michelle are doing with all of the money they get from TLC? They certainly don’t appear to be putting it in accounts for their children, whom they continually insist they cannot afford to send to college.

In your marriage there will be times you’re going to be very exhausted. Your hubby comes home after a hard day’s work, you get the baby to bed, and he is going to be looking forward to that time with you. Be available. Anyone can fix him lunch, but only one person can meet that physical need of love that he has, and you always need to be available when he calls.

In the Duggars’ world, women are not allowed to say “no” to sex. A wife’s duty is to always “be available when he calls.” Also part of the Duggars’ world is the belief that wives must submit to their husbands. You better believe that Jill and Jessa, both recently married, fully believe that they must obey their new husbands. They believe this because that is what their parents spared no pains to teach them. That’s how this works.

So I am at a loss as to why, out of all of this, it is only now and only with regards to their homophobia that people have a serious problem with the Duggars. It’s not even like this is the first time the Duggars have combined their opposition to gay rights with their politics—in 2012 they campaigned for Rick Santorum, emphasizing his opposition to marriage equality. Don’t get me wrong, I find the Duggars’ views abhorrent. But why this issue and this moment, and not other issues or earlier moments?

The petition itself was actually started months ago, when Michelle recorded her transphobic robocall, but didn’t gain much traction. It only began making real progress toward gaining signature last week, when the Jim Bob and Michelle posted a photo of themselves kissing and invited other married couples to post their own photos. When gay and lesbian couples became posting their own kissing photos, the person running the Duggar facebook page deleted them. And that, dear readers, is what actually caused the current outrage against the Duggars’ homophobia.

So let’s get this straight. The Duggars support an extreme version of patriarchy that holds that wives must be constantly sexually available for their husbands, and no one bats an eye. The Duggars promote child rearing practices that involve spanking infants and punishing children for frowning, and no one cares. The Duggars don’t allow their adult children to be unchaperoned or to text their beaus without daddy reading over their shoulders, and everyone smiles and calls it quaint. The Duggars support a sexual predator and continue supporting his ministry even after his actions are made public, and everyone yawns. Michelle Duggar records a transphobic robocall and most people just shrug. But the Duggars delete pictures of gay and lesbian couples kissing from their personal facebook page, and that is enough to bring a hundred thousand people out of the woodwork to demand TLC to pull the show.

Now for the million dollar question: Do I think the petition is a good idea? Would I like to see TLC pull 19 Kids and Counting?

The problem I have with TLC is not so much the fact that they run the Duggar’s show as it is the fact that they portray the family as all cutesy and happy and sweet, covering over the horrible things the parents believe and support and the impact these things have on their children. I grew up in a family like the Duggars. I was the oldest of twelve children, homeschooled, courtship, the whole thing. There is so much there that the TLC crew doesn’t even touch on as they fall all over themselves giving the family a happy friendly smiling glaze.

I don’t think we should require families on TV reality shows to support gay rights. I do think we should demand that the networks that air reality shows be honest about their subjects. And while we’re at it, let’s demand that TLC set up accounts for each of the children rather than simply handing the cash over to their parents. But where’s the outrage pushing that cause?

November 21, 2014
On #Shirtstorm and Completely Missing the Point
Next Post 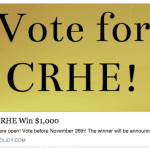 November 21, 2014 Help the Coalition for Responsible Home Education Win a Grant!
Recent Comments
0 | Leave a Comment
Browse Our Archives
get the latest from
Love, Joy, Feminism
Sign up for our newsletter
POPULAR AT PATHEOS Nonreligious
1