Steve Is a Man: On Minecraft and Gender

Like just about every American child between the ages five and fifteen, my daughter Sally is a huge Minecraft aficionado. As I’ve watched her play, I’ve found myself bothered by gender issues that should be easy to fix but instead seem ubiquitous in our world today.

The default Minecraft character is a man named Steve. Mojang recently added a default female-looking character (Alex), but it took them five years to do so. Five years. And even today, the pocket edition of Minecraft—the one played on tablets and iPads—only offers Steve. With all of the settings you can adjust, would it really be so hard for them to add Alex to this as well?

Curious about the rationale behind all of this, I did some googling and found that gender was addressed in an interview with Minecraft co-creator Notch in 2012.

If it wasn’t for the fact that the default Minecraft character is referred to as “Minecraft Guy” and that I once jokingly answered “Steve?” when asked what his* name was, Minecraft would be a game where gender isn’t a gameplay element.

The human model is intended to represent a Human Being. Not a male Human Being or a female Human Being, but simply a Human Being. The blocky shape gives it a bit of a traditional masculine look, but adding a separate female mesh would just make it worse by having one specific model for female Human Beings and male ones. That would force players to make a decisions about gender in a game where gender doesn’t even exist.

I’m sorry, what? Is Notch really saying that the default character is only seen as masculine because his name is Steve and people call him the “Minecraft Guy”? For real?! Here is the default Minecraft character, Steve:

Only a man would think that this character is gender neutral.

If you don’t think gender should exist in your game, don’t introduce it. The issue here isn’t simply that Steve is blocky. In fact, that’s not the issue at all—we’ll get to that in a moment. The issue is that Steve is not gender neutral. He’s explicitly masculine. I mean, am I the only one who can see his five o’clock shadow? I think a lot of people see male as default. For them, it is adding female options that inserts gender into an otherwise genderless game. Bullshit. This game ceased being genderless the moment Notch designed a stereotypical male character as its only default.

Notch argued that forcing people to choose between a male and female default would insert decisions about gender into a game “where gender doesn’t even exist.” This might actually be a good argument, if Steve wasn’t obviously male. Notch and the rest of the Mojang team could have created an actually gender neutral character, complete with a gender neutral name. This wouldn’t be that difficult, really. They could name it Casey or Alex or Jordan, do away with the five o’clock shadow, tweak the clothing and hair slightly, and they’d be good to go.

The problem here is consciously creating an obviously masculine default character and then claiming that gender does not exist in the game. How could someone as clearly intelligent and creative as Notch not see this? How can blind spots be that big?

Notch’s claim that the blocky nature of the character made adding a female default impossible is now laughable. Today, Mojang allows people to create their own “skins” (or find them online) and upload them to their character. Good female skins proliferate.

Here are some female skins:

In other words, Notch’s appeal to the blocky nature of the character was nothing more than an attempt to explain away a conscious decision to privilege the masculine.

I’m not going to stop my daughter from playing Minecraft because its creators have made some sexist (yes, sexist) decisions. I am, though, glad she is playing it at a time when the ability to change the character’s skin is increasingly making Steve irrelevant. Sally poured over a variety of skins and was excited with her ultimate choice—the Elsa skin you see immediately above.

Of course, when she plays pocket edition on her tablet, she’s still playing as Steve.

Note #1: A reader pointed out that while the proliferation of customized skins have made Steve fairly irrelevant in game (except for pocket edition), the merchandise is still centered around Steve. While Alex (below) does exist, she (assuming she is a she—as several readers have noted, Alex is much more gender neutral than Steve) is nowhere near as central in the marketing. And yes, marketing decisions like this tend to be conscious and thought out. In other words, Notch could have created Alex earlier and made her as central as Steve, but chose not to. 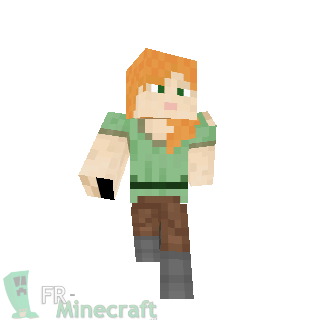 Note #2: Another reader noted that the marketing push centered on Steve occurred after Notch’s 2012 interview. If anything, this makes Notch’s comments more hypocritical. It means he claimed gender wasn’t a thing in Minecraft, that the “human model” (i.e. Steve) was supposed to be gender neutral, and even that the “Steve” label was just an offhand remark, and then turned around and signed off on a highly gendered marketing push centered around an obviously male and clearly labeled Steve.

Note #3: A third reader has noted that when you purchase the game, you don’t actually get to choose between Steve and Alex. Instead you are just randomly assigned one or the other. I had previously thought that you could choose, or that you were assigned the appropriate one based on your gender. I did some digging and it seems you cannot change from Steve to Alex or Alex to Steve in-game. If you are assigned Steve (or Alex), the only way to change that is to find a custom skin elsewhere and upload it to your profile. This makes me wonder if Alex was designed to be female at all, or just to add some variety to the assigned default.

Note #4: Yet another reader noted that there is a difference between the “mesh” and the “skin” and argued that Notch was talking about not wanting to add a female “mesh.” It’s true that Alex is actually a new mesh, with thinner arms, and that either mesh can have male or female skins put on it. But my concern was never with the mesh. Notch argued that the game would be gender neutral if he hadn’t jokingly called the default character (mesh + skin) “Steve.” This is laughable, because the default character (mesh + skin) is very obviously male. That is where my problem lies—today, Steve is the only option when playing on pocket edition, and is central to the game’s marketing. Would it be that hard to allow pocked edition players a male and female option, or simply an androgynous option? And if your intent is to make a game without gender, why build your marketing around an obviously male character?

April 1, 2015 Did Ted Cruz Actually Ejaculate into a Cup? Some Thoughts on How We Cover Politics
Recent Comments
0 | Leave a Comment
Browse Our Archives
get the latest from
Love, Joy, Feminism
Sign up for our newsletter
POPULAR AT PATHEOS Nonreligious
1