By now you’ve probably all heard of Kim Davis, the Rowan County, Kentucky, clerk who is refusing to issue marriage licenses to same-sex couples, arguing that her religious beliefs prevent her from doing so. Critics are calling attention to the fact that Davis was married four times as evidence of hypocrisy. But what I want to call attention to is a slightly different issue.

Earlier today, fellow blogger Matthew Facciani called attention to the ways some of Davis’ detractors have used slut-shaming and/or criticism of Davis’ looks and physical appearance in their criticism of Davis. He pointed to one meme in particular—a photo collage of pictures of Davis with the words “How does someone this ugly get married four times?” printed across it.

There is much to criticize Davis for, and it is absolutely important to call attention to the problems with the narrative she has formed around herself. Davis is refusing to do the job required of her as a public official. If she cannot in good conscience perform her job, she should step down. This is not unlike a Quaker refusing to issue gun permits or a Christian Scientist pharmacist refusing to prescribe medicine.

And yet, Davis is absolutely right to call out attacks that rely on slut-shaming and mocking Davis’ looks as sexist. As he explains in his conclusion:

It’s great to call out bigotry and mentioning hypocrisy can provide some interesting discussions when done tactfully, but can we please stop slut-shaming and attacking the looks of women that we disagree with? If the point of attacking these people is to demonstrate that we won’t stand for bigotry in this world, then the tactics I’ve mentioned here are failing miserably. We can do better.

Yes, Kim Davis is a bigot, and yes, her four marriages are relevant. But we need to be able to call out her bigotry and discuss her hypocrisy without engaging in bigotry ourselves. As Facciani notes, some have responded to news of Davis’ four marriages and her infidelity by calling her a “slut” and a “whore.” Calling attention to her hypocrisy in relation to her continued denial of same-sex couples’ right to marry is justified; slut-shaming is not. And shaming her for her looks? No.

In this vein, I want to call attention to a related line of attack which I believe should also be avoided. Have a look at this cartoon: 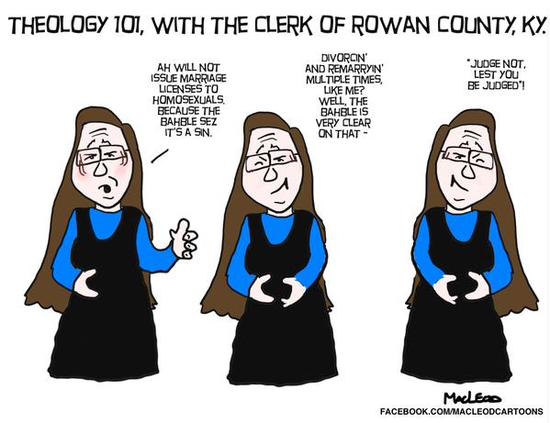 Note the spelling of some of the words and phrases ascribed to Kim Davis—“Ah will not issue marriage licenses to homosexuals because the bahble sez it’s a sin.” These spellings are clearly meant to portray Davis as a redneck, hillbilly, or backcountry hick, and that’s classist. Should we call people out for bigoted beliefs? Absolutely. Should we make fun of the way they talk or mock them for where they’re from? No.

Given that Kim Davis has now been sent to jail for refusing to obey a court order, I suspect we’ll be talking about her for a long time to come. As we engage in those conversations—as we discuss issues of religious freedom and point a finger at homophobia—let’s make an effort to avoid using either sexism or classism in our own critiques. I have to believe we can call out bigotry without engaging in it ourselves.

September 2, 2015
Guess What This Boston Magazine Article about a Harvard-Bound Homeschool Grad Neglected to Mention?
Next Post