I was struck by a recent article on right-wing site The Blaze. Our discussion of “fake news” has tended to focus on what facts are real or not. See Pizzagate, for instance, or this mess over Seth Rich. But there’s another issue at play here, a disagreement not just over fact but also over procedure. On Sunday, a day after the London Bridge attack, The Blaze author Chris Enloe opened an article with this statement:

NBC News, via their official Twitter account, lashed out at President Donald Trump Saturday in the midst of an Islamic terror attack in London.

Here’s what actually happened. The exchange began when Trump tweeted the following: 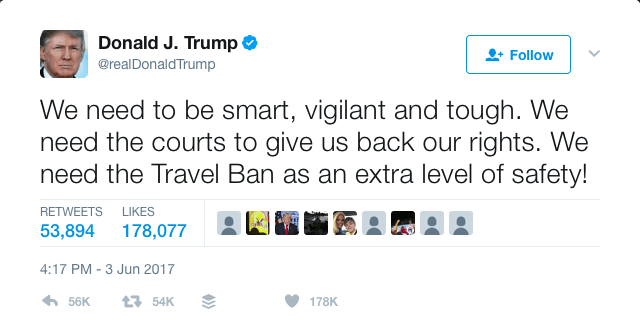 Text: We need to be smart, vigilant and tough. We need the courts to give us back our rights. We need the Travel Ban as an extra level of safety!

Coming when it did, Trump’s tweet clearly implied that the breaking incident in London was a terror attack. Only one problem—as this timeline makes clear, it had not been officially confirmed that the incident was a terror attack. Remember when a vehicle ran into a crowd in Times Square a few weeks ago? That was not a terror attack. So while terror attack is definitely high on the list of possibilities when an incident like this is initially reported, it’s generally a good idea to wait for official confirmation, something Trump clearly did not do.

Enloe excuses Trump’s jumping the gun by stating that:

Given that he’s the president of the U.S., Trump likely already had advanced intelligence of the situation.

I don’t think we should assume that at all, especially after the damage done to U.K.-U.S. intelligence relations following the Manchester attacks. Further, even if Trump had already been briefed by U.K. officials, he would not have been authorized to release that information until after British officials made the official confirmation that the incident was terrorism. Doing so would further damage U.K.-U.S. intelligence relations.

Unsurprisingly, then, NBC News responded to Trump’s tweet as follows: 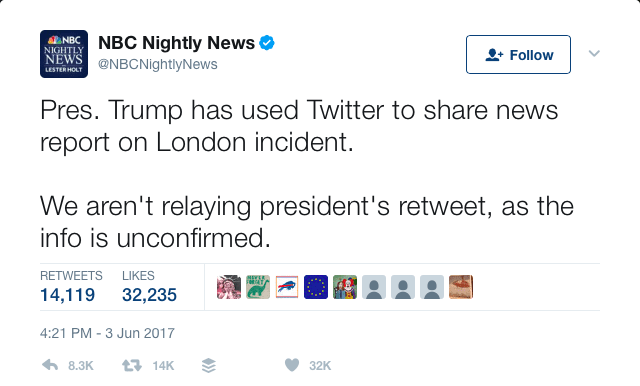 Text: Pres. Trump has used Twitter to share news report on London incident. We aren’t relaying president’s retweet, as the info is unconfirmed.

In addition to the tweet at the beginning of this post, Trump had retweeted a Drudge Report tweet which read: “Fears of new terror attack after van ‘mows down 20 people’ on London Bridge…” This may be the “retweet” NBC News refers to here. Either way their point is clear—Trump is making statements about the attack that haven’t yet been confirmed, and thus cannot be assumed to be correct.

Text: At 0025hrs 4/6/17 the incidents at #LondonBridge & #BoroughMarket were declared as terrorist incidents.

This is as it should be. Trump should have waited for official confirmation before discussing the incident as a terror attack, and NBC News was right to point out that the information Trump relayed was unconfirmed. However, Enloe, in his article on The Blaze, took issue with what happened.

The implication of NBC’s tweet, of course, was that Trump was sharing unreliable information. And if the replies to NBC’s tweet is any indication, that implication was clearly communicated.

However, Trump turned out to be correct and Saturday’s attack was confirmed by British officials to be terrorism perpetrated by radical Islamic terrorists.

After it was officially determined that the attack was terrorism, Twitter users took to NBC’s tweet to gloat. Many claimed that NBC, through their tweet, was showing an anti-Trump “bias”

The strangest thing about Enloe’s article is that Enloe doesn’t admit that NBC News was right. I only knew that the official confirmation came after Trump’s tweets by checking the timestamps. Enloe acts as though NBC News was being petty when in fact all they were doing was following standard journalistic procedure. Further, he acts as though Trump’s tweeting unconfirmed information was a-okay because he turned out to be right. That is not how it works.

As this case makes clear, the issue goes deeper than “fake news.” It’s not just about the facts. It’s also about disagreement over procedure. On right-wing media sources like The Blaze, a president tweeting unconfirmed information about breaking news as though it is fact is a-okay, and news sources that point out that the information is unconfirmed are carrying out a vendetta against the president rather than engaging in set journalistic procedure.

And that, quite frankly, is where we are today. 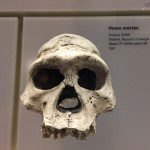 June 6, 2017
Evangelicals Who Link Evolution and Racism Forget Christianity Was Used to Defend Slavery and Segregation
Next Post 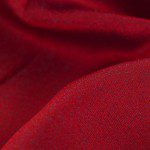