What Does “Traditional Family Values” Actually Mean? May 21, 2018 Libby Anne

I cut my teeth on conservative “pro-family” political activism. As a teen, I campaigned against abortion and marriage equality. In the evangelical circles I grew up in, we talked a lot about the importance of protecting “traditional family values.” To me, this meant promoting the heterosexual patriarchal family—breadwinning father, homemaking mother—and ensuring that tax policy and other government action was preferential to this family form. But is that what the term always means?

A recent story in The Dallas Morning News points to ways the meaning of “traditional family values” can differ depending on the individual—and the extent to which this label serves as a blank onto which people can map different things.

Vickers “Vic” Cunningham, a former criminal district judge now in a Republican runoff for Dallas County commissioner, acknowledged Friday that he set up a living trust with a clause rewarding his children if they marry a white person.

Cunningham spoke to The Dallas Morning News about the trust after his estranged brother, Bill Cunningham, came to the paper earlier this week saying his brother had been a lifelong racist.

Vic Cunningham denied harboring racial bigotry but did confirm one of his brother’s primary allegations — that his trust includes a stipulation intended to discourage a child from marrying a person of another race or of the same sex.

“I strongly support traditional family values,” Cunningham said. “If you marry a person of the opposite sex that’s Caucasian, that’s Christian, they will get a distribution.”

Cunningham said his views on interracial marriage have evolved since he created the trust in 2010. He said he has accepted his son’s relationship with a woman of Vietnamese origin, though he said he couldn’t change the terms of his trust.

Here is a transcript from the interview:

Cunningham: “I am supporting what my beliefs are. I strongly support traditional family values, that if you marry a person of the opposite sex, that’s Caucasian, that’s Christian, you will get a distribution. It doesn’t prohibit anything, and it doesn’t say you’ll never get the money, you’re just not going to get hat milestone distribution. Does that make sense?”

Interviewer 1: “Why did you want to put that in there?”

Cunningham: “It’s my religious belief that marriage is between one man and one woman, and I wanted to support my faith of being a Christian.”

Interviewer 1: “And what does that have to do with them being Caucasian?”

Cunningham: “Again, I wanted to support my faith, and encouraging a traditional family value.”

Interviewer 2: “You consider it a traditional family value, as I understand it, to marry within one’s race?”

Let’s do a little thought experiment.

Bob and Ted both believe in “traditional family values.” To Bob, this means that women should be homemakers, that God has made the husband the head of the family, and that marriage between two people of one sex is against the Bible. For Ted, “traditional family values” also includes a belief that interracial marriage is against the Bible, and that people should stick to their own kind.

Here’s where this gets interesting: Mike is a politician. Mike is a Republican. Mike says on the campaign trail that he supports “traditional family values.” Bob and Ted hear two different things. Bob hears that Mike opposes gay marriage and abortion. Ted hears this too, but he also hears that Mike opposes interracial marriage and perhaps (at least to a certain extent) integration.

When Mike the politician uses the term “traditional family values,” he is able to signal to racists like Ted that he is in their camp, without actually saying anything racist—and perhaps without intending to signal that at all. For his part, each time Ted hears someone endorse “traditional family values” he assumes they mean what he does by the term—i.e. opposition to interracial marriage, among other things—and this communicates to him that his bigotry is widely held by others as well, and in some way acceptable.

The term “traditional family values” is largely undefined. That makes it flexible—people can map all sorts of specific ideas or beliefs onto it. And for Vic Cunningham, that means opposition to interracial marriage. 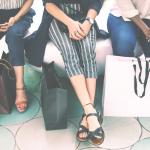 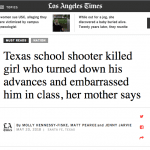 May 22, 2018 In the Wake of the Latest School Shooting, Newspaper Headlines Need #MeToo
Recent Comments
0 | Leave a Comment
Browse Our Archives
get the latest from
Love, Joy, Feminism
Sign up for our newsletter
POPULAR AT PATHEOS Nonreligious
1