Kavanaugh and Gorsuch Went to the Same Prep School, But Their Yearbooks Couldn’t Look More Different

It’s time we talked about Kavanaugh’s yearbook. It’s typical for yearbooks to contain inside jokes and such, right? It’s all fun and games! So Republicans would like to have it, at least. How seriously should we actually take Kavanaugh’s yearbook? they ask. Sure, he made all these references to drinking and maybe to other things, but much of it is hard to interpret, and it’s just a yearbook—right? What does a yearbook tell us?

As I sat and mused about the yearbook—and all the right-wing explaining and downplaying—my husband mentioned offhand that Neil Gorsuch, Trump’s first nominee to the Supreme Court, who was quickly confirmed, also attended Georgetown Prep, just like Kavanaugh. In fact, the two were there at the same time: Gorsuch graduated in 1985; Kavanaugh graduated in 1983. Suddenly, I was curious.

What did Gorsuch’s yearbook look like? Was it full of the same alcohol-fueled joking as Kavanaugh’s? If Kavanaugh was just doing what every Georgetown Prep student did—an academically serious kid who also had strong friendships—it should look about the same, right?

So I looked it up. Here is Gorsuch’s yearbook entry:

And here it is in text form:

Gosuch’s entry is so different from Kavanaugh’s that it’s jarring.

Here, for comparison, is Kavanaugh’s entry: 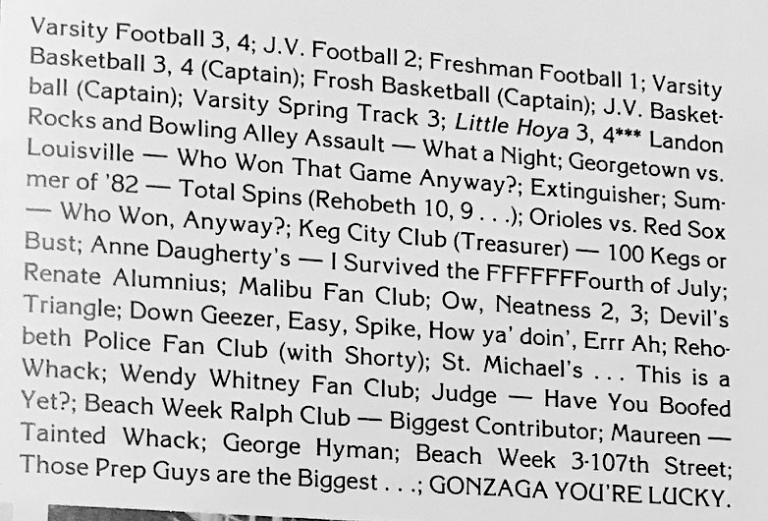 Here is the entry in text:

Kavanaugh’s yearbook entry is filled with innuendo and references to drinking, among other things. Also absent are Gorsuch’s references to academic pursuits, clubs, and honors, despite Kavanaugh’s claim that he buckled down and focused on academics while in high school.

Of course, on some level these entries don’t just (or primarily) tell us about the individuals who wrote them. The real insight these entries give us is a window into these individuals’ friend groups. Who did they run with? Who did they form their jokes with? Gorsuch, it would seem, was a policy nerd who hung with the debate kids. Kavanaugh, in contrast, seems to have run with a crowd that partied, and partied hard.

Look, I’m no Gorsuch fan. His politics and jurisprudence runs completely counter to mine, and his values are very different from my own. None of this is to suggest that Gorsuch was a perfect Boy Scout himself, or that keeping your nose clean makes you a good person even if you destroy people’s lives with your policies. It manifestly does not.

Lots of people party in high school. There is nothing wrong with having partied in high school. Kavanaugh’s yearbook only matters because Kavanaugh has been insisting that he was a squeaky clean Boy Scout in high school in order to discredit Christine Blasey Ford’s allegation that he sexually assaulted her at a party.

Kavanaugh’s yearbook would suggest that he wasn’t the academically focused service project driven Boy Scout during high school that he’s claiming he was to discredit Ford’s allegations. Unsurprisingly, Republicans want to downplay Kavanaugh’s yearbook. Every Georgetown Prep grad filled his yearbook entry with partying braggadocio as a matter of course, they seem to suggest.

This is why I went looking for Gorsuch’s yearbook.

Having said all this, I do have a quick side question: Why does anyone think it’s a good idea to put two white men who attended the same prep high school on the Supreme Court? Shouldn’t we have some diversity in life experiences on the court? Wouldn’t that make sense, for a body that makes decisions for all Americans?

I have more questions too. But for now, I’ll leave it at that. 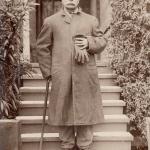 September 28, 2018
Forbid Them Not: The Virginia Gentleman and the Angry Fiancé
Next Post 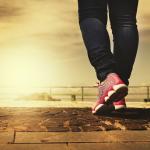