Our Nation Has Lost Its Witness

Our Nation Has Lost Its Witness June 3, 2020 Libby Anne

Growing up, I was told not to do something that would “damage my witness.” If I, say, drank alcohol underage and at the same time claimed to be a Christian, I would be acting hypocritically and my actions would lesson others’ willingness to listen when I tried to evangelize them or invite them to church. Don’t damage your witness.

I am reminded of this message today. Strongly. Vividly.

Jesus Christ Seattle was having a peaceful protest, standing there with umbrellas, and police just tear gassed them. pic.twitter.com/5vahC4v6Zz

When police in the United States gas peaceful protestors and shoot at them with grenades, they harm our nation’s ability to speak against the repression of protesters in Hong Kong, or in Russia, or elsewhere around the world. They make us a hypocrite. We are losing our witness.

The United States already had some pretty major problems. Endemic problems. I am neither naive nor uneducated. We invaded Iraq based on a lie. Vietnam never should have happened. We have invaded more countries than I can count on my hands and feet, often without Congressional approval, much less transparency. We have propped up right wing dictators. We live on stolen land. Police attacked civil rights protestors, too. We often preach one thing and practice another.

If our citizens can’t peacefully protest without being gassed and fired upon by police, what freedoms do we actually have? The ability to protest injustice and wrongdoing is perhaps the most critical—the most important—freedom of all. And it is perhaps one area where the United States perhaps still did hold moral gravity—an area where we could speak with some authority.

In the last week, police forces around the United States have handed enemies of freedom around the world a gift. Now, every time we condemn Hong Kong for cracking down on protests, they can point to these videos and others like them. And they already are.

We are seeing a betrayal of ideals of freedom and democracy on the most basic, fundamental level. I have not been dewy eyed about America since childhood, but somehow, this still hurts. It is yet one more betrayal of my childhood ideas about our nation.

We have lost any pretense of having a witness; we have given up our claim to being different from anyone else. Oppressive regimes around the world will use our actions today as an excuse and justification for yet more brutal crackdowns. Real people will suffer.

I grew up in the shadow of Tiananmen Square. 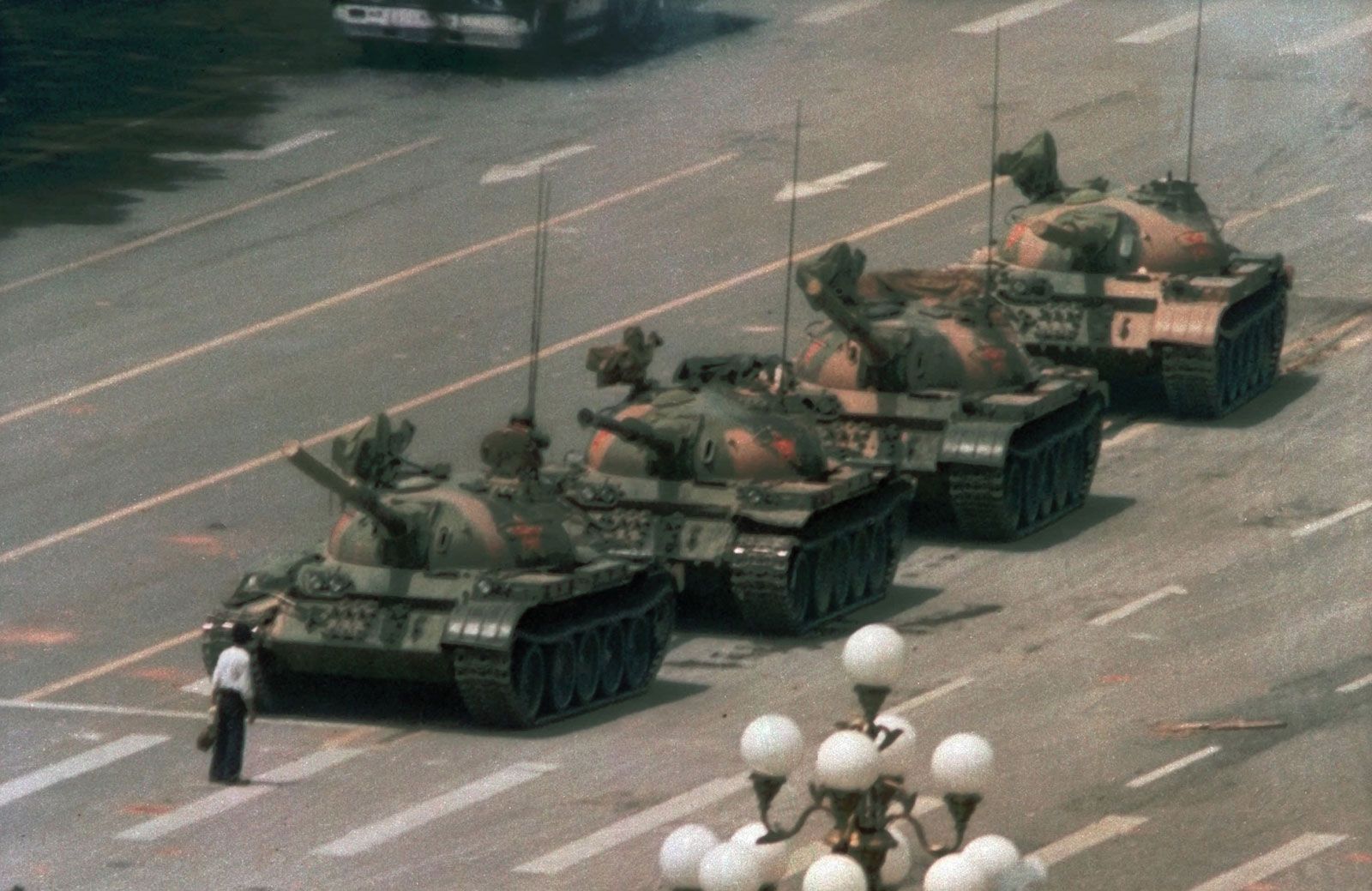 It happened when I was little. I remember my parents talking about it. What set us apart from China was that we were not like that. We did not put tanks on the street. We did not crack down on peaceful protests calling for freedom or the redress of grievances. I even met someone who was there. Tiananmen Square was impressed on my psyche. We are not like that. We have freedoms.

Our government has not killed hundreds of protestors (yet). However, our president does want to put the military on our streets. He has said as much. He has shown a callous disregard for protestors and a willingness to invoke military solutions to civilian unrest. His words are chilling—and so are the images that have come with them. Where exactly are we headed?

This photo by @MarthaRaddatz at the Lincoln Memorial is deeply disturbing. pic.twitter.com/4cUgxQKh2p

Military tanks are rolling down the streets of major cities because the president does not want the citizens of this country to protest racism, oppression, and police murder. pic.twitter.com/jcu9m60GcY

I hope to god the president blinks and steps back. I hope to god we do not see actual martial law, U.S. military forces facing down protestors. We are not at Tiananmen Square yet, and we do not have to be. This can end, now. But even if it does, the images and videos and words that have come out of this moment have undermined our ability to condemn dictatorial regimes for suppressing protests in their own countries. We have lost our witness.

This is what conservatives in America have become:

The people in charge of our country right now are more interested in quibbling over whether the police used tear gas or pepper spray than they are in asking whether police should be using chemical agents against peaceful protestors at all. A look around the comment section, or around twitter, suggests that conservatives genuinely do not believe that the people have the right to protest at all. This is fascism.

Am I having a stroke or did the paper of record just publish a call to crush a popular uprising by turning the American military against the country’s citizens pic.twitter.com/9SSGK5rsew

This is what the world sees.

I see some saying that the protestors are violating curfews with their protests. Think you that the protestors against injustice in other countries do not face the same thing? Think you that protests are always legal? Absolutely not. To say that they must be legal would be to suggest that, if Hong Kong bans protests, they would be in the right to gas and jail pro-democracy protestors, always and in any case. This is clearly nonsense.

About the curfews—we didn’t do an enforceable stay-at-home order to stop the spread of COVID-19, and as I seem to remember it, the reason was that in the United States, we have freedom of movement. Confining Americans to their homes, like China did with its near absolute lockdowns in Wuhan, would have been a violation of our rights—or so it was said. So what changed all of a sudden? When did become okay to prevent people from protesting by forbidding them from leaving their homes?

And don’t say this is about looters, because by and large the looting has started, where it has happened, after peaceful protestors have been driven out by police with tear gas, rubber bullets, and flash bang grenades after the curfew begins. The pattern has become a familiar one. If the police cared about looting, and supported people’s ability to protest, they would be guarding stores instead of gassing peaceful protestors. They would be working with organizers to prevent violence, rather than inflaming situations by charging peaceful marches and firing grenades. Besides, this is common strongman rhetoric—to discredit pro-democracy protestors by smearing them as troublemakers and looters. Don’t fall for it.

And so here we are. We have lost our witness and have walked so far off a cliff that I’m not sure what it will take to get back down. At this point reform seems too tame a goal, too blasé a solution to the raging fire we are facing. How can you reform police departments who are willing to do this?

TURN THE VOLUME UP: This footage is unbelievable!

This happened today: Philadelphia Police Officers were firing tear gas on peaceful protesters who were TRAPPED on a fenced off hill on the side of a highway!

I can’t even say for sure that we will have free and fair elections come November. Our president is sowing disinformation and distrust in elections like a strongman dictator.

Don’t get me wrong, I will vote, and I will urge those around me to do so as well. I still have hope that we will have an election that is mostly free and fair. Or at least, an election that is free and fair enough for the rising tide of anti-Trump voices to prevail. But elections are yet one more area where our nation has damaged its witness. You can’t have a president say things like the things Trump is saying, and not embolden strongmen who use similar rhetoric to discredit legitimate elections in their own countries.

A city on a hill, they said. I only hope the tear gas doesn’t cause too much damage as it wafts down the hillside.

June 2, 2020
When Did Disabled Life Stop Mattering?
Next Post