The highest ranking public health official in Tulsa, Oklahoma, has said that his office believes the Trump administration’s June rally in that city has contributed to an uptick in COVID-19 cases that can be seen today. Trump’s campaign spokesman isn’t having it.

Trump campaign spokesman Tim Murtaugh said the campaign went to great lengths to ensure that those who attended the rally were protected.

“There were literally no health precautions to speak of as thousands looted, rioted, and protested in the streets and the media reported that it did not lead to a rise in coronavirus cases,” Murtaugh said in a statement. “Meanwhile, the President’s rally was 18 days ago, all attendees had their temperature checked, everyone was provided a mask, and there was plenty of hand sanitizer available for all.

“It’s obvious that the media’s concern about large gatherings begins and ends with Trump rallies,” he said.

Murtaugh’s statement is bullshit. His claim that there have been “literally no public health precautions” during the Black Lives Matter protests that have been ongoing since George Floyd’s death in May is absurd. All you have to do is look at a single damn photo to see that nearly every protestor has worn a mask. At many protestors, organizers have handed out masks. Protestors have been instructed that they should all wear masks, to meet public health recommendations, and have actively worked to create a pro-mask social norm within the protest movement itself. 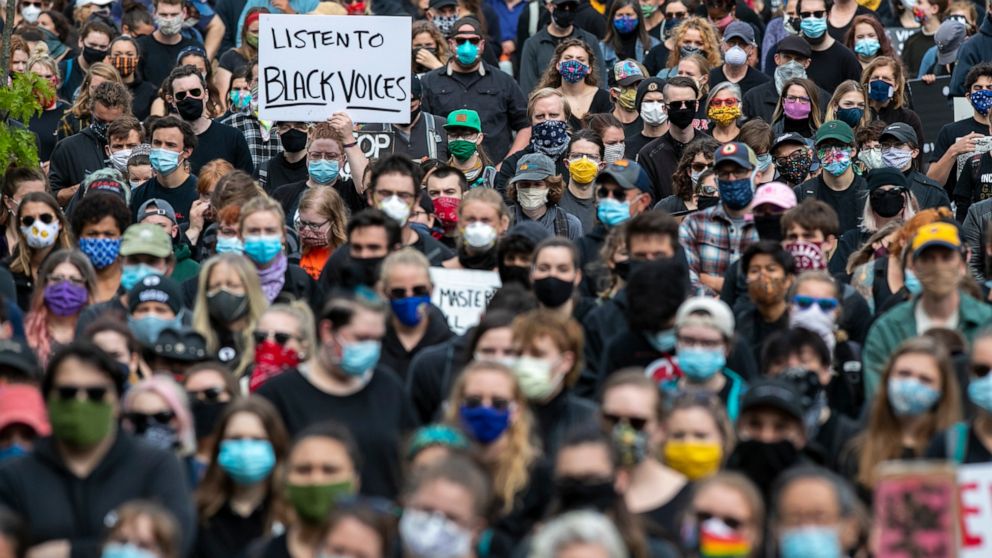 But it’s not just that—other measures have also been taken. Protests have taken place outside, at a time when public health officials have urged people to stay out of indoor spaces, which are most conducive to spread. Protest leaders have urged those who have participated in protests to voluntarily have themselves tested, and many have—I have multiple friends who have gotten COVID-19 tests in the past month for this reason.

Murtaugh’s claim that protests involved “literally no public health precautions” is flatly and obviously false. But that’s not the only problem with his statement. Murtaugh also said that:

“Meanwhile, the President’s rally was 18 days ago, all attendees had their temperature checked, everyone was provided a mask, and there was plenty of hand sanitizer available for all.”

It’s worth noting that we have known for quite some time that temperature checks are faulty measures of infection, because so much of transmission is driven by presymptomatic or asymptomatic transmission. If the Trump campaign had actually cared about preventing or lowering transmission, they would have held the rally outdoors—something they considered and rejected. So much for being so conscious of protecting public health.

What of the other claims? I don’t know about hand sanitizer, but I do know that handing out masks is not the same thing as consciously creating a cultural norm that ensures that people will wear them. At the protests, organizers have worked to create that cultural norm—to ensure that people don’t just have masks, they actually wear them. Not so, at Trump’s rally. People may have had access to masks, but they did not wear them. The claim that the Trump’s Tulsa rally was planned with careful attention to protecting public health while the protests involved “literally no public health precautions” is a bald-faced lie. The campaign could have required every person in the arena to wear a mask. They chose not to. They could have held the rally outdoors, where experts say risks of transmission is much lower. They chose not to.

Meanwhile, protest organizers aggressively pushed mask-wearing, and urged those who attended protests to isolate themselves from vulnerable family members and to have themselves tested for COVID-19. Which entity showed more care for public health? The Trump campaign, or the local activists who organized and facilitated the George Floyd protests?

I’ll finish by returning to Murtaugh. I wonder, sometimes, what it must be like to lie so easily, and so constantly? I am the kind of person who likes to think that people are basically good. But the more I hear people like Murtaugh blatantly lying the harder it is for me to believe that. The past four years feels like it has been a grand experiment in how far powerful people can get away with lying. There is no bottom. It sometimes feels like truth doesn’t matter anymore, and that scares me.

Perhaps the bigger question is: why does it work so well? What is it that has made so many people willing to lap up lies, without the slightest thought? How did we end up in a world where lying doesn’t matter?

Of course, to get to any of that, we need a world where people can recognize lies, and where they actually care. We don’t live in that world, and it scares me.

July 14, 2020 When White Relatives Turn Fascist
Recent Comments
0 | Leave a Comment
Browse Our Archives
get the latest from
Love, Joy, Feminism
Sign up for our newsletter
POPULAR AT PATHEOS Nonreligious
1