Paul and the Silversmiths

Part 8 of series:
Ancient Ephesus and the New Testament

Paul and the Silversmiths

Now that we know something about the goddess Artemis and her importance for Ephesus, we’re ready to get back to the story of Paul’s ministry in this city.

As Paul’s ministry began to thrive in Ephesus, a certain Demetrius became concerned. He was a silversmith who made little pieces of jewelry in the image of the goddess Artemis or, as most scholars think, of her temple. These were not souvenirs that worshipers took home with them, but rather small offerings given to the goddess when devotees visited her temple. Demetrius, noting the growing impact of Paul’s ministry, gathered the other silversmiths together and presented his case:

“Men, you know that we get our wealth from this business. You also see and hear that not only in Ephesus but in almost the whole of Asia this Paul has persuaded and drawn away a considerable number of people by saying that gods made with hands are not gods. And there is danger not only that this trade of ours may come into disrepute but also that the temple of the great goddess Artemis will be scorned, and she will be deprived of her majesty that brought all Asia and the world to worship her.” (Acts 19:25-27)

Notice that Demetrius was worried, first of all, about the potential loss of income if too many people were to become Christians. Second, he was worried about the loss of glory for Artemis.

Demetrius understood something essential about Christianity, something that reflected accurate insight. He knew that when people become Christians, they stop worshiping pagan gods. While we might assume this to be true, nobody in Ephesus would have done so (besides the Jews, who were vigorous monotheists). It was very common in the ancient world for people to add new gods to their personal pantheon. It was uncommon for them to insist that there was only one true God. If Paul had offered up Jesus, not as the only Savior of the world, but simply as one more savior among many, then the Ephesians would probably have built a temple to Jesus and included him in their pagan celebrations. But Christianity was distinctive, unsettling so, from an Ephesian point of view, in that it claimed the total allegiance of followers. Thus Demetrius rightly concluded that the success of Christianity would lead to the demise of Artemis worship. (That this very thing ultimately happened in the Roman Empire is celebrated on one of the ceiling frescoes in the Vatican. Tommaso Laureti, painting in the late 16th century, represented the “Triumph of Christianity” with a shattered statue of a god before the cross of Christ.)

Though Acts doesn’t tell us exactly where Demetrius made his speech, it most likely happened within the commercial agora (or marketplace), that is adjacent to the Library of Celsus. This large space is quite open today, but once would have been surrounded by colonnades, under which merchants and craftsmen sold their goods. It was a central gathering place in Ephesus, one that would be filled with people. Plus, it was near the theater, which figures prominently in the story of Paul and Ephesus.

Demetrius’s effort was successful. The enraged silversmiths began shouting praises to Artemis. They grabbed some of Paul’s companions and dragged them to the theater. This theater, much of which is still intact, is an impressive structure even today. It could contain up to 25,000 people. Folks sitting in the “cheap seats” would have had an impressive view of the harbor (now just a marshy area). According to Acts, Paul wanted to go to the theater, no doubt to defend his friends. But some Christians and even some of the city officials convinced Paul that this would not be wise.

I’ll finish up the story of Paul and the silversmiths in my next post in this series.

September 23, 2011 Paul and the Silversmiths, Part 2
Recent Comments
2 Comments | Leave a Comment
"Yep, it works. Was looking around to see if anyone knows WHY."
Rick Chance A Miraculous Cure for Bug Bite ..."
"Hi Pastor,I am hoping you will continue your discussion on how God guides us. Can ..."
BB How Does God Guide Us?
"Happy birthday USA you are 243 years old today. Like in a marriage, a lot ..."
Tom Krayg Astounding Freedom: A Reflection for Independence ..."
"Great article on Thanksgiving. More of us should be thankful to those who work hard. ..."
Rhonda Diane Lucas-Wright A Simple “Thank You” That Makes ..."
Browse Our Archives
get the latest from
Evangelical
Sign up for our newsletter
POPULAR AT PATHEOS Evangelical
1 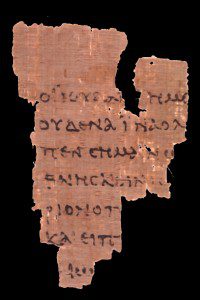