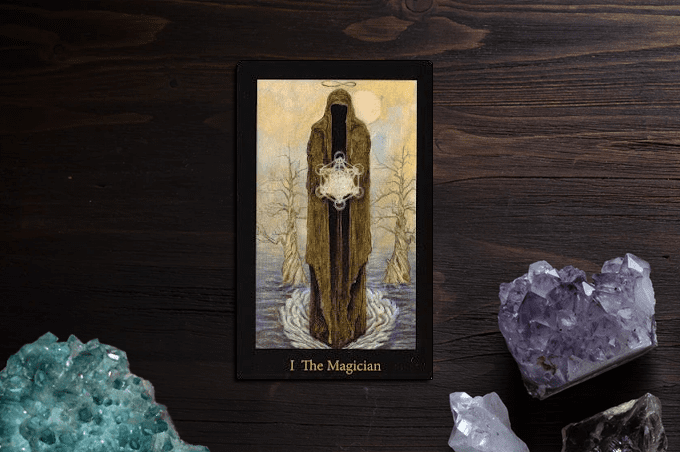 The Mary-El Tarot is a striking deck which defines its theme as “one of the alchemy of the soul; of finding balance, symmetry, mastery of the self, and becoming your own genius.” Each card is an exquisite painting by artist Marie White full of mystical symbolism and pure beauty. The subtitle of this deck is “Landscapes of the Abyss”, which feels like it perfectly sums up the feel of these cards. The cards feel like an underworld journey where you meet strange but fascinating characters along the way, while discovering the abyss of yourself in the process.

The Mary-El Tarot comes with a guidebook that is almost 200 pages, sharing Mary’s vision for the tarot. Regarding the theme, she quotes the famous Nietzsche line “Battle not with monsters, lest ye become a monster, and if you gaze for long into the abyss, the abyss gazes also in you.” She then discusses how the abyss is an internal place that we fear to look into, a place of our demons and our shadows and monsters – a place where the fool must take his journey to find their own salvation. She writes that “The Major Arcana which began in the psuedo apocalyptic Middle Ages deep in the clutches of the Black Death, first opened its eye amidst one of the most artistically creative times in all humanity. It is a universal key, an alphabet with which one can write the powerful name of every single thing, even God. And the poetry written with that alphabet is the Minor Arcana.” It’s clear that Mary had a clear vision when designing this tarot, and there’s enough sacred geometry, qabalah, magickal symbolism, and sigils embeded within the images to satisfy any occultist.

The cards are fairly large and have a glossy finish and come in a very large sturdy magnetic box. However, the box despite how well made it is, is one of my bigger complaints of this deck – it’s good for storage if you keep this deck at home, but impractical for anyone who travels with their tarot a lot. The cards are also a bit difficult to take out of the box itself, so another means of storage is recommended if you get this deck. The deck’s large size makes it more difficult to shuffle than other decks and you’ll need fairly large hands to handle them. This would be acceptable if the deck was just a major arcana or some sort of oracle deck, but since it’s a full 78 card tarot deck it’s a bit awkward to work with. The large deck also means that spreads need to be smaller, as they each take up so much room on the table. 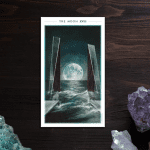 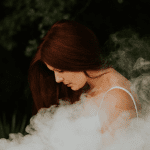 December 3, 2017 Witchcraft & Prayer
Recent Comments
0 | Leave a Comment
"This makes me love jack-o-lanterns even more."
Anonymous Jack-O’-Lanterns and the Devil
Browse Our Archives
Related posts from For Puck's Sake