Our Pagan War On Christmas

The right-wing Christian demagogues keep saying that there’s a “War on Christmas” and the truth is they actually aren’t technically wrong from a Pagan perspective. While they may be referring to people’s thoughtful inclusion of other cultures, religions, and even secular celebrations during this time of year as an attack against them when they speak of the War on Christmas. For a lot of us Pagans, the War on Christmas is a holy observance, but not necessarily how it’s being framed by these demagogues. The fact that it falls on Christmas is purely coincidental, as it’s really a War on the Winter Solstice, which Christians merged their own Christmas with.

This war or battle is one that occurs biannually on the Winter Solstice and the Summer Solstice, but it’s more mythopoetic than literal. This idea stems from many cultural myths and folklore themes in Pagan Europe which was articulated by Robert Graves in his book The White Goddess based on Sir James George Frazer’s idea of the dying and resurrecting god archetype in The Golden Bough in a section entitled “The Battle of Summer and Winter.”

It’s during the solstices that they battle for dominance to rule the land during the year. On the Winter Solstice, the Holly King’s power is at full strength as it’s the shortest day of the year and the longest night. The Winter Solstice is his last big celebration of power, but also when the Oak King as the Child of Light is reborn and they engage in a battle. These battles are less of a fight and more about the changing of the mantle of who reigns in the cycle of life and Wheel of the Year, which is seen as a power struggle and referred to as a battle mythopoetically.

The Holly King recedes back to the Underworld at the end of the Winter Solstice as the Oak King is reborn, ensuring the growth of longer and warmer days with the power of light winning. On the Summer Solstice, the Oak King is at his full strength, being the longest day and shortest night of the year and the Holly King re-emerges from the Underworld. The Oak King is sacrificed for the land and the people and the Holly King begins his reign heralding longer nights and colder weather. Check out my interview on the Winter Solstice for more of an explanation of the astronomy related to these myths.

So that is our Pagan War which we celebrate and observe during the time that coincide and influenced a lot of Christmas, not so much a concern or desire to take away any Christian’s holy day of observance. Wherever you are and however you celebrate this season under whatever names or customs that you do so, I wish you much love, luck, prosperity, peace, and happiness to you and yours during this time and the coming year. 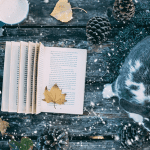 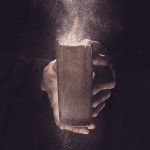 December 26, 2018 Favorite Witchy Books of 2018
Recent Comments
0 | Leave a Comment
"This makes me love jack-o-lanterns even more."
Anonymous Jack-O’-Lanterns and the Devil
Browse Our Archives
Related posts from For Puck's Sake