Before You Meet Prince Charming: Part 1 Chapter 6 May 16, 2017 Suzanne Titkemeyer 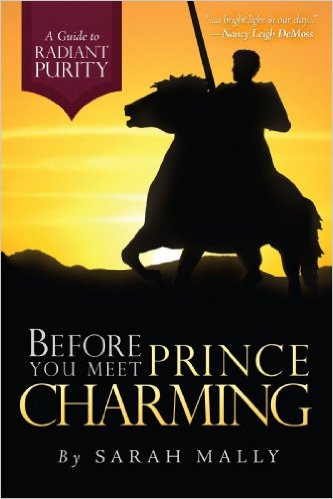 This chapter is nominally about what young women should do when God wants them to be single for a time in their lives.   Practically, the chapter is very, very vague; that’s rather sad since Sarah Mally had started a ministry for tweens and teens called “Bright Lights” that’s still extant today.  Some actual details about how she started “Bright Lights” would have made the chapter interesting and useful.

Instead, we get some more anachronisms…..

For anyone who remembers the beginning of the book, the reason the Princess is going out among the People is so that she can be of use to them.  This was the idea of the King since the Princess will be ruling them – or another suitable Kingdom – next to her future husband.  (Actually, I added the part after “since”.  The book never spells out what the endgame of succession in the Kingdom is.)  This plan started when the Princess was 16.  At the beginning of this chapter, the Princess is now 18 – and has “helped” her People by picking up the vegetables of one old woman.  The narrator tells us that the King and Princess have another heart-to-heart talk and the Princess decides to start serving her people in a more active fashion.

After that rousing start, we learn what the Princess is up to now:

Much was being accomplished during the time of her life. The princess often represented the royal family on important occasions, and she spent many days caring for orphaned children in the nearby villages – even beginning the courtyard club for them. Sometimes she would hosts tea parties, teaching godliness to village girls. God was also teaching her much during these years and filling her with understanding and ability in all manner of workmanship. She was gaining skill in many kinds of fabric work, weaving and tapestry, candle and soap making, as well as fine artistry with dyes, paints, and gold. She did not neglect her writing, archery, or equestrianship, and she also made it a goal to learn in the useful talents of floral decorating & baking. (pg. 103-104)

Many widows and weary mothers were the joyous recipients of homemade gifts or meals from the princess. She tried to use each thing she learned in some way as a tool to accomplish her assignments from her heavenly Father. Each mastery acquired could also then be taught to all the wise-hearted young ladies in the kingdom. Her days were full and fruitful. Many stories, memories, and friendships were hers. In a hundred little ways, she was a candle spreading light everywhere she went, bringing strength and encouragement to many lives that were filled with darkness. (pg. 104)

May 16, 2017
Quoting Quiverfull: Feminists Are Evil Communists?
Next Post

May 17, 2017 Quoting Quiverfull: Lori Alexander Tells Off Commenter Who Dares to Defy Her?
Recent Comments
36 Comments | Leave a Comment
"This is late, partly bc of my preoccupation and partly bc I'd been slowly reading ..."
Jennifer Serena’s Serenity – Luxury Hotel, Birthing ..."
"Thank you for your commitment to truth and love, Suzanne. Best wishes to you and ..."
Meredith Anne Not a Goodbye, More of a ..."
"For your sake, I am so glad you will no longer be editing and managing ..."
Lana Not a Goodbye, More of a ..."
"For what it's worth, I've learned a lot from you about a Very Creepy movement ..."
Griff Pryce Not a Goodbye, More of a ..."
Browse Our Archives
get the latest from
Nonreligious
Sign up for our newsletter
POPULAR AT PATHEOS Nonreligious
1