You Must Stay With Abusive Husband and Other Inanities Uttered by Trey February 14, 2018 Suzanne Titkemeyer

This morning on Facebook I saw a disturbing screen cap on Spiritual Sounding Board It was by Trey, uber troll of The Transformed Wife and all things Lori Alexander-related. He was chiming in on a recent post by Lori, of course, and seems to be rubber-stamping his approval on spousal abuse towards the wife. See for yourself. 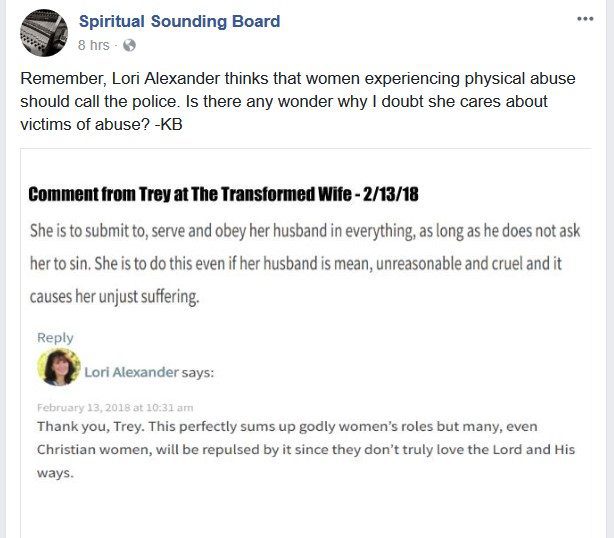 Don’t truly love the Lord and His ways? It’s not God’s ways for a woman to get the stuffing beat out of her by a husband no matter what interpretation of Paul’s words on submission in marriage you follow.

But that’s not the only hectoring evil stupidity issuing from the fingers of Trey. On yesterday’s piece Lori Alexander posted on her site with the title ‘Founders of Feminism Had Reprobate Minds’. Trey went off on a long rant about the duty of wives. Keep in mind that he is responding to Lori’s false allegations that all the founders of feminism are mentally ill just because the relative of one stated that her sister was. Typical leaps of illogic that Lori specializes in. Here it is: 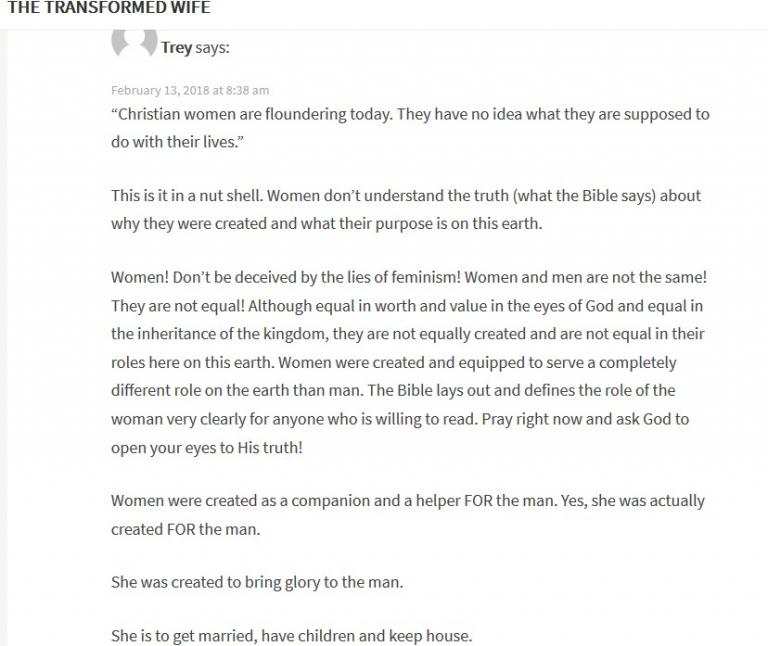 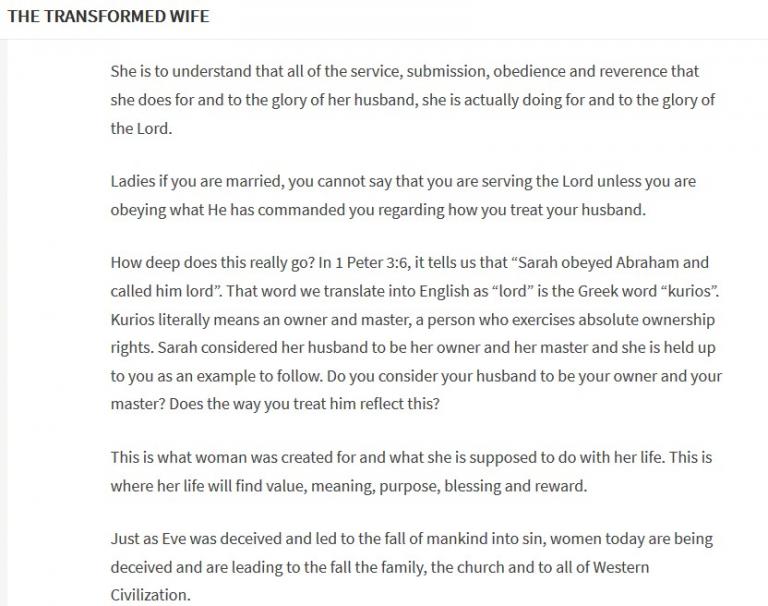 Yes, Trey, we get the point. You think all women should be groveling under your boot. This is all bad enough but Lori Alexander’s reaction to ‘Trey’ being slightly questioned in bizarre to say the least. 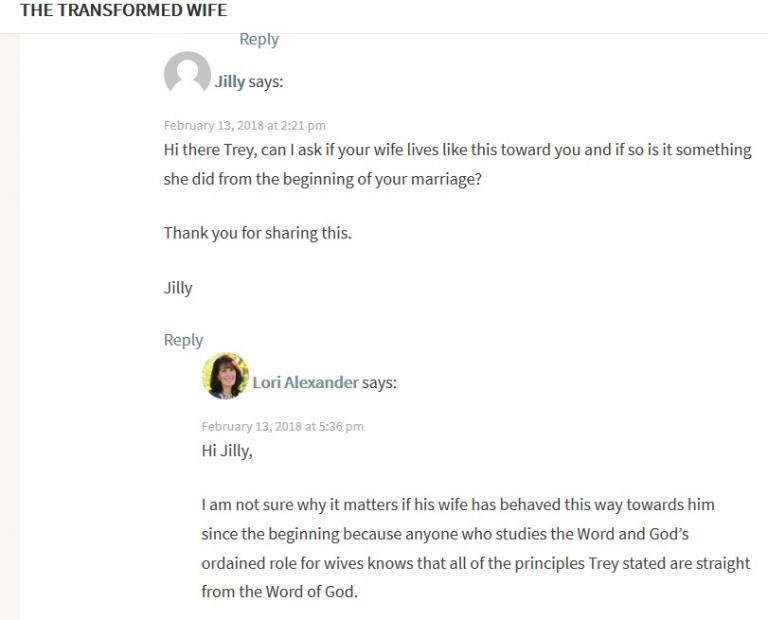 Huh? Reasonable and respectful question, but Lori interrupts her regularly scheduled groveling at Trey’s feet to attack Jilly for asking. Rather hostile.

Ever since Trey appeared on Lori’s site and to refute all the bad reviews of Lori’s book ‘The Power of the Transformed Wife’ it’s seemed almost certain that he’s a Lori or Ken Alexander created sock puppet, one of them masquerading as someone else. From early on if you looked at his profiles on social media you’d find no information beyond name and no other friends than Ken or Lori or both. Those profiles are gone now, deleted, and if you run Trey’s name you get a gay African American man, an Hispanic artist and a white unmarried gamer who is also part of the Men’s Rights groups. None of them Lori’s Trey.

Why does any of that matter? Because if it’s true it means that Lori and/or Ken are using subterfuge and lies to reinforce her poorly-thought-out theology. No different than cheating folks and lying, both sins in the Bible. Lori would hardly be the first not great writer online to use sock puppets to pretend to greater influence. In fact I know of a case where a fiction writer had over 70 fake online personas whose entire focus was promoting and ‘me tooing’ her words, ego and activities.

If, IF Lori’s ministry, words and theology were so helpful and awesome and she was more emotionally secure she’d let her community and acclaim grow naturally and organically instead of trying to manipulate and denigrate herself to the top of the Quiverfull fame mountain a step below Debi Pearl of No Greater Joy. It matters because it’s a clear indicator that the main thing that Lori Alexander is after is not helping other women be better wives, she’s after fame and praise.

If Lori were only teaching women, or her space were only for women she’d run this guy off, or kindly suggest he needs to mosey on along to a man’s site. Instead she behaves in a curiously familiar way with him. She uses him to reinforce her most awful ideas.

On another front it was announced yesterday that Patheos writer Bristol Palin is separated from her husband of less than two years and he has filed for divorce. Should be interesting to see what Bristol, from a Quiverfull Evangelical background, has to say in her blog in Patheos Evangelical Christian section.

Is it not those in the Evangelical tradition that keep screaming that divorce is a bigger problem outside of the church because we treat marriage as disposable?

If I sound a little snarky and mean today I do apologize. I’m just tired of all the fake folks like Lori Alexander, Bristol Palin, Trey and a host of others. When I look at most of the Evangelicals publicly pushing the religion today all I seem to see are hypocrites.