I’m betting that Jim Bob Duggar, Duggar patriarch, is having major hissy fits behinds the scenes right now. I can almost hear his freakouts from here on the other side of the world. Why? Because his daughter Jill’s husband, Derick Dillard, he of the missionary-begging, the surgery on his jaw and teeth and first Duggar son in law is tweeting out that he’s not getting paid a dime from TLC, but someone (Jim Bob) is.

You should see the dance I have to do to score enough bars on my cell phone to access the internet from my new house while waiting for a wifi install. I have to get on a kitchen stool, hold my sacred cell phone skyward out of the kitchen window and pray for bars. That’s the highjinks I had to perform to stay abreast of Derick’s flying faux pas. It’s been quite the week.

We knew eventually someone in the Duggar bunch would come forward to puncture the family facade. If I was a gambling gal I would have put money on it being one of the middle or younger boys coming out as homosexual and outing the family secrets in a tell all book after being black balled by the family. Knew it would not be Josh because he’s certainly had that opportunity in the wake of his various scandals and not taken it. The interchangeable younger guys didn’t do it though, it is Derick Dillard exposing a tiny bit of the dysfunction and money to the fans on his Twitter account.

One thing you can count on with Derick Dillard on his Twitter account and other social media is that people will attack him since he and Jill started asking for donations for their mission trips to Central America. The attacks have intensified once Derick started taking cyber pot shots at the star of TLC’s other show, Jazz Jennings of ‘I Am Jazz’

But in the past week Derick started spilling some very toxic surprising tea – he claims that both he and Jill do not get paid for appearing on ‘Counting On’. He has claimed that they are ‘volunteers’ on the TLC show. Derick never directly addresses who gets paid, but everything he’s saying seems to point to the fact that the only one getting mad bank from TLC for the show is that doofy Pater Familias Jim Bob Duggar.

Screen cap from the Hollywood Gossip. Since stating these things Derick has deleted these tweets and all the ones he made complaining about TLC refusing to pony up any dough to pay for his son Sam’s birth and the many medical expenses from his weeks in the neonatal intensive care unit.

Interestingly enough this is the first real indication we have had that the birth of Sam wasn’t routine, that things obviously went haywire no matter how hard the Duggars tried to pretend otherwise. 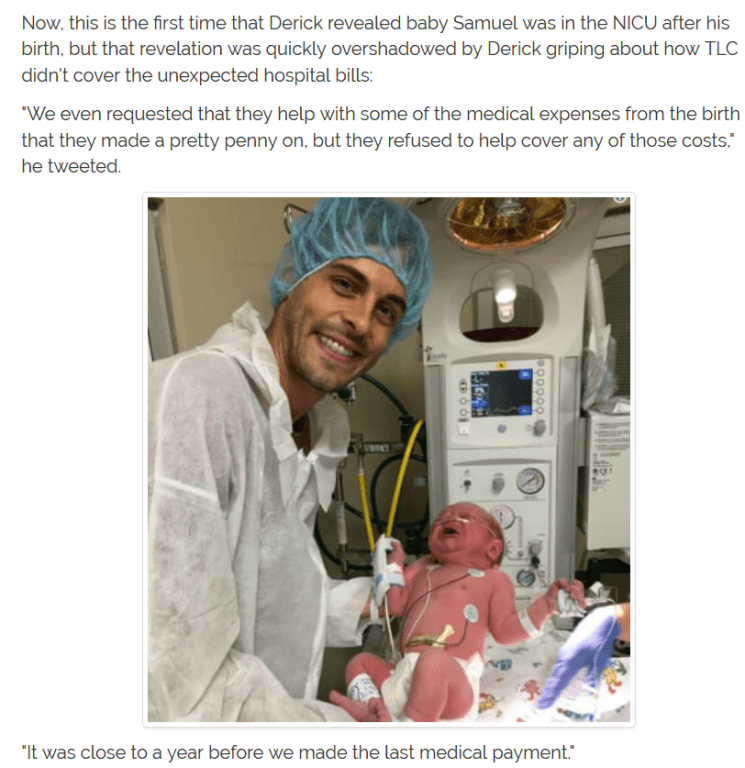 Another interesting point is that immediately after Derick tweeted about how TLC and other shows exploit children he was unfollowed on social media by Duggar friends the Bates family and many others in the larger circle of Duggar pals. Wonder how quickly Jim Bob called Derick on the carpet for his rash tweeting?

Will Derick be the one to tear down the Duggar family and end the show?

I can see Jilly-Muffin being too naive to realize she should be receiving a stipend for her appearances on the show. But not Derick. I cannot believe he willingly participated without a paycheck. Unless he’s as sheltered and naive as his wife.

Someone is getting paid the roughly 40K per episode that the family is reputedly paid. I always assumed that the money was banked in a trust for the minor Duggar children, some paid directly to the adult Duggar children and some put in the hands of Michelle and Jim Bob Duggar. Guess I was wrong and its likely every penny went straight into the hot little mitts of one Jim Bob. Many states have laws in place protecting minor children and placing money in a trust for them that they received for participating. Arkansas has zero laws in place governing the payment and investment of the money of children, creating this situation where Jim Bob gets it all and decides what to do with the money.

Sounds like dear old daddy might be guilty of financial abuse of his children if Derick’s words are true.

Why am I getting visions of a Scrooge McDuck with helmet hair swimming in a pool filled with dollars?

Not that Derick and Jill are so pure themselves. It also came out that they are busy reading their two children books written about the evils of socialism and about second amendment rights. Scarier that they are indoctrinating their children from birth than it is that these two aren’t getting TLC money.

March 14, 2018
Servant Leadership is For Feminine Wimpy Males?
Next Post

March 16, 2018 Lori Alexander Insists Young Working Women Do Not Care About Their Homes?
Recent Comments
75 Comments | Leave a Comment
"This is late, partly bc of my preoccupation and partly bc I'd been slowly reading ..."
Jennifer Serena’s Serenity – Luxury Hotel, Birthing ..."
"Thank you for your commitment to truth and love, Suzanne. Best wishes to you and ..."
Meredith Anne Not a Goodbye, More of a ..."
"For what it's worth, I've learned a lot from you about a Very Creepy movement ..."
Gwen Pryce Not a Goodbye, More of a ..."
"Unfortunately, this kind of satire (if it even is satire) is what gives Christianity the ..."
Emily Is Biblical Gender Roles a Big ..."
Browse Our Archives
get the latest from
Nonreligious
Sign up for our newsletter
POPULAR AT PATHEOS Nonreligious
1