Hey Paul Pettit of the Dallas Theological Seminary I am quoting Lori Alexander AGAIN today. Mostly because its easier than chasing down the Nancy Campbell posting from Above Rubies that Lori, umm, err, ‘imitated/possibly copied or rewrote’. I’m reaching for the low hanging fruit today because I’m busy picking the mangos and starfruit at my new house.

I have internet today and today only during my adventure moving and I just had to share this recent Lori Alexander post. No, not the one where she repeated misspells Michael Pearl’s name while claiming that Michael’s children turned out perfect so she implies you should beat yours to make sure they do not ride the bus to hell. Recent reveals of one of the Pearl childrens marriage exploding ending up in court with the ex daughter in law using the grandparents words against her husband show that’s not quite true. Nope.

Lori is busy telling everyone how evil reality television is, except for the Duggars, of course. Apparently she watches “Counting On” and thinks it is real! That just tickles me.

Reality tv is about as real as Starburst fruit chew candy is to the strawberries, limes, lemons and grapes in the produce section. Yes, at first sniff and glance you might think they have a lot in common, but the candy is manufactured with chemicals to fool the taste buds into thinking it’s real instead of a square of sugary goop that will rot your teeth way before a pile of strawberries.

Even the shows like ‘American Idol’ and ‘The Bachelor’ are highly manipulated by the production staff. Sometimes that manipulation is as slight as stocking the house with copious amounts of alcohol and filming the ensuing high-jinks of the drunken, like on the failed reality shows ‘Mr. Personality’ (ended after only five episodes) and ‘Joe Millionaire’.

I wish I could blame some of the awfulness of the Duggars various reality shows on alcohol consumption, but quite frankly the only person tempted to imbibe when the Duggars are on the old boob tube is me.

EVEN the Duggars are fake, actually the Duggars are very fake. Does anyone recall the episode where the Duggar family gave away groceries at a thrift shop, and it came out that after the cameras stopped rolling the groceries were taken back and loaded into the family van? How about the many things removed from the Duggar’s shows that were in the first very specials like Blanket Training? The Duggar refined what they showed and explored based upon viewer outrage very early on. Likely at the hands of family patriarch Jim Bob Duggar.

In Touch Weekly did a recent post about how much about their true beliefs the Duggar family hides on their television shows. Lately we’ve seen some queer actions on the part of Jim Bob likely, such as Amy Duggar King posting a photo of Joy Duggar’s huge newborn baby in the hospital and the photo disappearing a few hours later. When Samuel Dillard, son of Jill and Derick Dillard was born this last year the family was suspiciously silent and released very few photos. Contrast this with other photo ops and information they released after other births.

But some of what Lori is seeing and thinks is real on the Duggar show could be the edit. That’s the interesting thing to me, how much the editing process colors what’s shown in the final product. You may not know this, but I was approached after taking over as admin here to be on one of those wife swapping television shows. They wanted to swap me with a Quiverfull momma. After reading through the contract I declined. The contract spelled out that you forfeited your rights to how you appeared on the show and were edited. No way. NLQ founder Vyckie Garrison was approached by Dr. Phil to do his show and turned him down for much the same reason I did the swap show. You ultimately have no control over how you appear.

It’s likely that Jim Bob Duggar does have final control over some of the content, but not entirely. Who knows what percentage is TLC and what is Jim Bob. But Lori naively believes it all, and believes that the happy-happy-joy-joy facade that the Duggars exhibit on the show is real.

Wow, I’ve ranted about the Duggars way too much here. But they were the first thing I focused upon and spewed about their fakeness and toxicity when leaving Quiverfull Evangelicalism myself. Here’s what Lori Alexander said that inspired this long post. 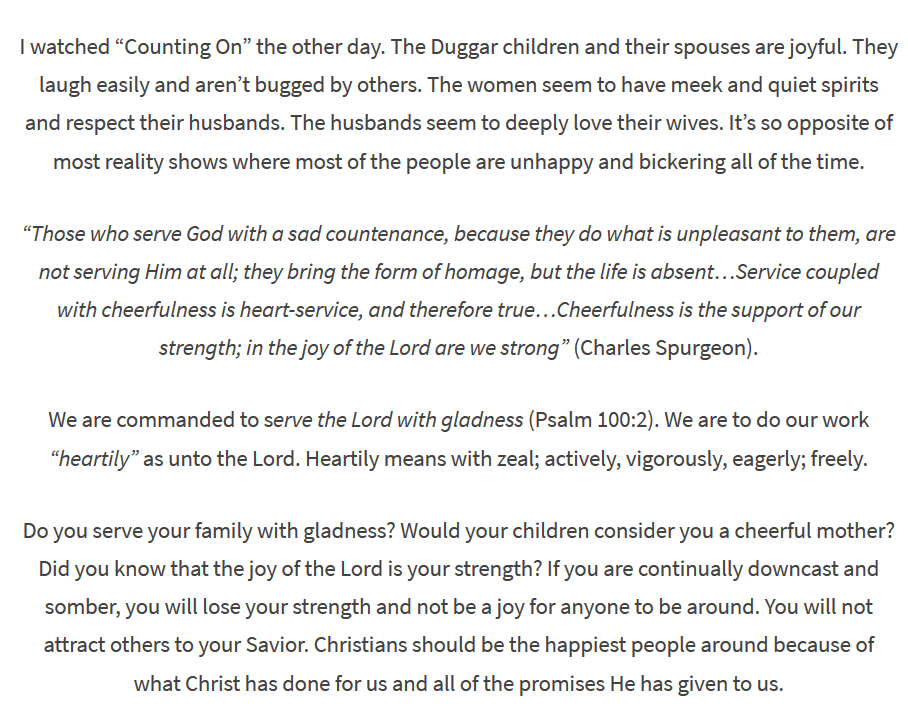 Your fake happiness is not happiness at all. We have all seen repeated how unhappy and miserable with a smile pasted on women in this subculture are.

I’ll be back once Cable Tica finds their manana and gets to my house. Will try to post some from an internet cafe in the meantime just like today.

March 6, 2018 Is Josiah Duggar's Bride Hate Pastor Kevin Swanson's Daughter?
Recent Comments
48 Comments | Leave a Comment
"This is late, partly bc of my preoccupation and partly bc I'd been slowly reading ..."
Jennifer Serena’s Serenity – Luxury Hotel, Birthing ..."
"Thank you for your commitment to truth and love, Suzanne. Best wishes to you and ..."
Meredith Anne Not a Goodbye, More of a ..."
"For what it's worth, I've learned a lot from you about a Very Creepy movement ..."
Gwen Pryce Not a Goodbye, More of a ..."
"Unfortunately, this kind of satire (if it even is satire) is what gives Christianity the ..."
Emily Is Biblical Gender Roles a Big ..."
Browse Our Archives
get the latest from
Nonreligious
Sign up for our newsletter
POPULAR AT PATHEOS Nonreligious
1