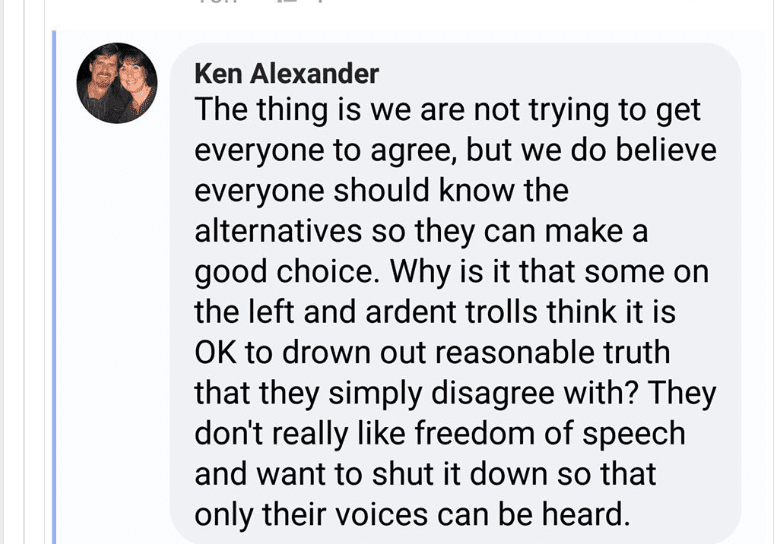 Earlier in the week when I was able to sneak into a Tamarindo restaurant with free wifi to take a gander at emails and Facebook while having a heaping helping of ceviche. I somehow ended up on another official Facebook page for Lori Alexander. I’d been searching Facebook for that bizarrely disappeared page that chronicled the comments Lori gets that don’t entirely line up with her beliefs and how quickly she deletes them – Undeleted Lori Alexander. Sorry to say it’s gone now. When I found this new second The Transformed Wife page I saw that Lori had posted another one of her self-penned ‘memes’. I never even got all the way through the meme because her first few sentences were just so venal and wrong. She said that women that oppose her words are opposing God, indicating that she speaks for God.

I was taken aback by this statement and before I could help myself I posted back to her, ‘But Lori, you are not God!’ Later I realized upon second glance that this The Transformed Wife 2.0 is another parody page like the gone and lamented Undeleted Lori Alexander. But I have seen Lori make very similar claims through the years that those that oppose her writings are opposing God himself. The language and the claims were so similar to the real deal that it was not immediately obvious that it was poking a little fun at Ms. Alexander’s expense. After all Lori has said that women are not made in God’s image, that if you do not keep your home clean and cook from scratch or teach your daughters to do the same that you are going to hell, all ideas not supported by anything in the Bible. I can well imagine her stating that she is speaking for God.

Something about the arrogance of people claiming that they have the mind and thoughts of God, no matter what faith or denomination they practice, makes my blood boil. It’s so common in Evangelical groups, and has made for some amusing people-watching when various speaking for God folks start arguing that only they speak for God. Sometimes I wonder if it’s some sort of personality disorder or peculiar mental illness.

This morning as I was attempting to stand on that stool in my kitchen window holding out my cell phone towards the direction of the lone tower over the mountain I strayed into Lori’s site The Transformed Wife. I wanted to find that meme of hers, fully read it and write about it here since I am making the journey into town and wifi soon. I found a long, nasty, hate-filled rant written by Ken Alexander, Lori’s husband in a post titled ‘Setting the Record Straight’.

It should have been titled ‘SHUT UP! I am uber RIGHTEOUS!!!’Apparently while I’ve been mostly off-line Lori wrote about and quoted hate-mongered and all around immature writer Matt Walsh about the subject of mental illness. I didn’t see the post by either Matt or Lori or the apparent avalanche of negative comments this triggered. Ken was defending Lori and claiming everyone not plastering their lips figuratively on Lori’s narrow derriere was slandering her. I don’t think Ken really knows what the true definition of slander is.

Most of his ire was directed at one commenter who goes by the name Rachelle O’Neal, who called out Lori over the post. There was something of a lengthy disagreement in the comments that Lori and Rachelle fought before Lori called up her husband on a business trip to complain about internet hating haters. Typically Lori deleted the entire comment thread before sending Ken in to tell off those pointing out the awful and false in her theology. Ken seemed to be the most outraged over the fact that her name might have been a nom de plume, which is ironic considering many people believe that Lori’s other defender Trey is Ken or another family member in disguise.

The second huge irony of Ken’s unhinged rantings is that he turned about and did the exact same thing he accused the commenter Rachelle of doing. He went right into personal insults towards her before launching into a paltry defense of why Lori and he had made many of their life choices. He does not understand that the main reason Lori’s detractors bring up the maid, the nanny, the expensive house, the unrealistic goals of only eating expensive organic foods is that it directly contradicts everything that his wife orders her followers to do! It’s so hypocritical!

Reading Ken’s piece, which can only be described as a cyber temper tantrum is pretty funny actually. He even mentioned the expensiveness of their house, claiming they aren’t rich. Funny, because a peruse of real estate in his area brings up places for a half million dollars that look like the small guesthouse we have on our place here in Costa Rica. Looking at the post you can just feel the anger oozing off Ken’s fingers. I guarentee you that no one that posted on those comment streams where the fighting took place felt anything that powerfully angry as they posted. This is like using a hand grenade instead of a can of Raid on a roach nest. You suffer the damage too.

The other issue Ken does not seem to comprehend is that the reason Lori gets so much criticism and push back is for her manners, or lack thereof. She comes across as mean, filled with hate and frustration, in both her book and her blog. There are literally thousands of other Christian women with blogs out there stating some of the same core bedrock beliefs who only get positive feedback. Why is that? Because they do it in a nice way or loving manner. Lori is all Old Testament God with name calling, promising hell and punishment, saying things in a very demeaning mien. It reads like ‘Come take your Cod Liver Oil while I spank you!’ Even her idol Debi Pearl realizes she needs to mix in the occasional self- deprecating humor in her posts and Nancy Campbell is always sweet and encouraging towards those that read her blog.

Another problem with the ideas of Lori Alexander in her book and blogs is that her words and ideas are entirely derivative, rewritten drivel straight from the ministry and books of Debi and Michael Pearl of No Greater Joy.  It’s not plagiarism,  but it’s not original either. The Pearl’s theology has a body count of dead children, and I’m worried that Lori will have a body count too when she veers into the territory of giving out wrong-headed medical advice, such as her recent ideas on fever, and doubling down on the idea that depression is merely selfishness and self-focus. Think that all you want, but the minute you start shouting it out to the masses you hold a responsibility if someone is harmed by your ignorant ideas.

But to me one of the most disturbing things about this incident is that Lori herself got so upset with others opinions that she had to call Ken on his job while out of town. In real life and online you are not going to be universally celebrated. It’s normal and healthy for people to hold differing opinions. What’s not normal is to be emotionally crushed by the opinions of a bunch of virtual strangers online. It’s immature and rather mentally unbalanced to freak out like that when everyone is not agreeing with you or stroking your ego. Lori needs to go offline for a spell, or perhaps forever. This is not normal.

Everyone online, blog or no blog, has at one time been the recipient of the ire of others towards their words. I routinely get idiotic threats or negative emails or personally attacked. What do I do? Cry and call my husband? Most of the time I laugh, like I did when the instructor Paul Pettit from Dallas Theological Seminar used a rude screen name referencing oral sex to make some silly claims. I just laugh, move the most bizarre to Jerks4Jesus and forget. Before I started doing that I used to get a much bigger stream of ugly coming from a Christian parade of stupid. Now that they know I have problem with sharing the stupid it’s cut down tremendously on the worst of the pushback, which used to include death threats or things like the time NLQ founder Vyckie Garrison and I got emails telling us that their women’s Bible study was praying daily that Vyckie and I would die of uterine cancer. I had to answer that email and say, ‘Thanks for the Christian love, but you better pray first that Vyckie and I miraculously regrow our wombs as we’ve both had hysterectomies.’ Shrug.

If you cannot handle pushback you just should not be online at all. You need to confine your teaching, preaching and socializing to the echo chamber that is your like minded buddies.

The message of Jesus is not to hate and harass other people in his name.  It’s not to make up a  bunch of new rules to add onto his words. It wasn’t to purposely exclude others and threaten them with hell.

April 3, 2018 Screen Caps From The Transformed Wife
Recent Comments
30 Comments | Leave a Comment
"This is late, partly bc of my preoccupation and partly bc I'd been slowly reading ..."
Jennifer Serena’s Serenity – Luxury Hotel, Birthing ..."
"Thank you for your commitment to truth and love, Suzanne. Best wishes to you and ..."
Meredith Anne Not a Goodbye, More of a ..."
"For what it's worth, I've learned a lot from you about a Very Creepy movement ..."
Gwen Pryce Not a Goodbye, More of a ..."
"Unfortunately, this kind of satire (if it even is satire) is what gives Christianity the ..."
Emily Is Biblical Gender Roles a Big ..."
Browse Our Archives
Related posts from No Longer Quivering