Last week the New York Times had a thought-provoking piece on the rise of the alt-right housewives as a culture. They did miss one big thing, that most of these self-identifying ‘Tradwives’ are merely the new alt-right face of Quiverfull.

White racism has been an underlying reasoning for Quiverfull, even if it’s rarely admitted. Once upon a time Above Rubies founded Nancy Campbell admitted that the reasons for having as many children as the Lord would bless you with was to outbreed brown people. Just once, but it is one of the many reasons why Quiverfull is still a thing

The Tradwives movement does not label themselves Quiverfull, but when you have folks like Ayla Stewart issuing the white baby challenge it’s all too easy to see the racism behind the challenge.

Screen cap from the NYT article mentioning Ayla, but failing to note that Stewart was originally scheduled to be a speaker at the Charlottesville rally that turned violent late last summer. 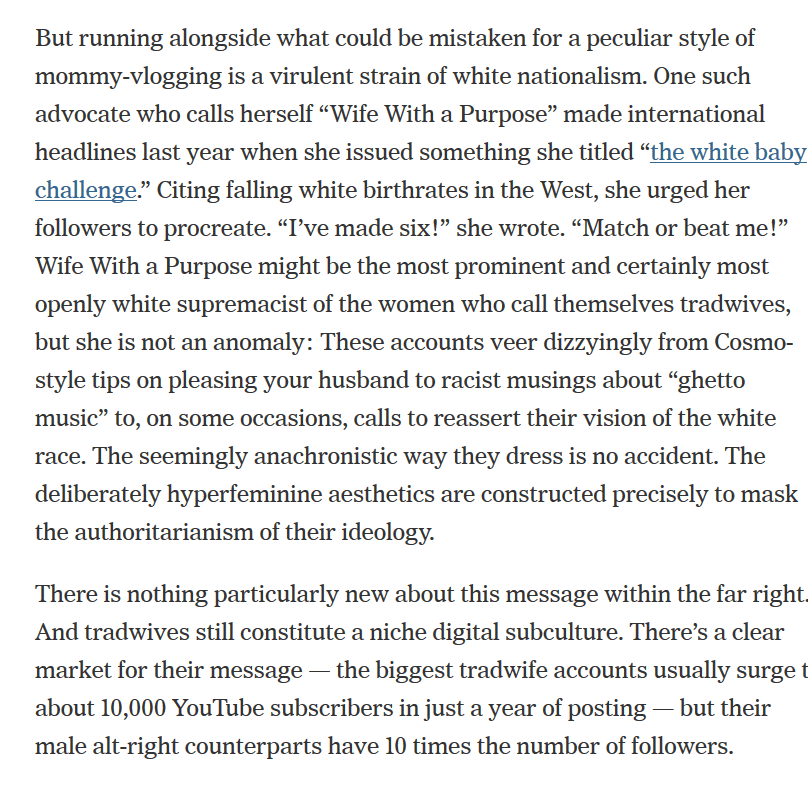 Ayla Stewart has a video up on her blog answering the NYT’s article, but it’s almost two hours long and ain’t nobody got time for that nonsense. Shouldn’t she be using that two hours to take care of her white babies instead of bloviating online?

At least by doing this Ayla Stewart, Nicole Jorgenson and others are sparing us having to guess if they are racist, instead of being coy and secretive about their motives like most Quiverfull.

How not surprising that the ladies division of the alt-right is a very slim fraction of the entire bunch. Shows how ultimately powerless they are regardless of blogs and videos.

Tradwives, just another name for Quiverfull.

June 6, 2018 The Royal Wedding Disrespected White Culture?
Recent Comments
24 Comments | Leave a Comment
"This is late, partly bc of my preoccupation and partly bc I'd been slowly reading ..."
Jennifer Serena’s Serenity – Luxury Hotel, Birthing ..."
"Thank you for your commitment to truth and love, Suzanne. Best wishes to you and ..."
Meredith Anne Not a Goodbye, More of a ..."
"For what it's worth, I've learned a lot from you about a Very Creepy movement ..."
Gwen Pryce Not a Goodbye, More of a ..."
"Unfortunately, this kind of satire (if it even is satire) is what gives Christianity the ..."
Emily Is Biblical Gender Roles a Big ..."
Browse Our Archives
Related posts from No Longer Quivering