This is from one of Lori Alexander’s commenters that is apparently trying to be an onine cultural enforcer. I cannot understand why she’s commenting and approving of what Lori says because she makes it very clear on her blog that she is a) not religious but secular, b) claims to be advocating for ‘Common sense’ and c) if her posts are anything to go by then she is college-aged. All things that Lori Alexander of The Transformed Wife has stated she hates in bloggers, particularly the secular young women. Lori just posted again why young women should not be bloggers giving out life advice because they don’t have enough life experience.

The only thing I’m seeing of this young woman’s blog ‘A Lady of Reason’ are claims that identical to Lori’s minus the Bible, with more fear-mongering thrown in, if that’s even possible. Here she rants on how liberals are ruining men by forcing them to be feminine. It is from a piece titled “Just Because We’re Women Doesn’t Mean Everyone Else Has To Be!” 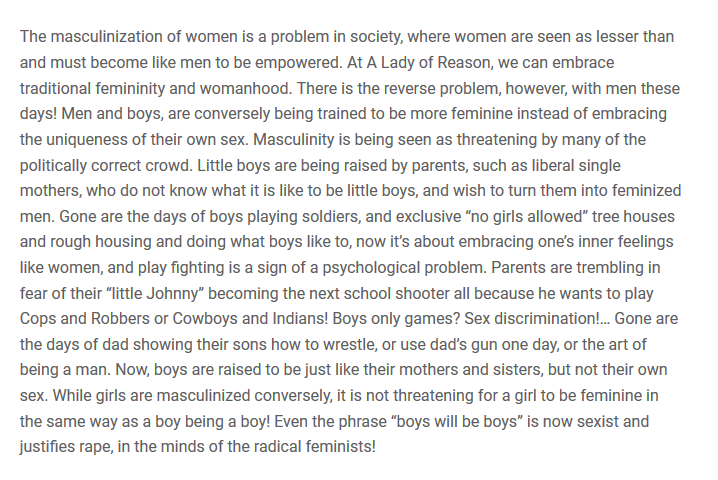 One thing I will say. This anonymous blogger surely has Lori Alexander/Debi Pearl’s shaming and blaming style downpat to the extreme. Hard to believe she’s not Evangelical Quiverfull. As a result I will not be sharing much of this young gal. I wanted to make the point that awful female cultural enforcers attract equally awful and dumb, even if everything else about A Lady of Reason would horrify Debi, Lori and the others.

That is one big old wall of text and it is just the first paragraph!

I had to laugh hard at the sheer ignorance, fear-mongering extreme and paranoia in one of her other posts – a post on why you should not travel to foreign countries. I live overseas, like I know at least one other reader does (looking at you SAO) and have lived in Europe and the edge of the Middle East. What she’s saying is so very wrong on most every level! You just have to use some common sense, that thing this blogger thinks she has but does not. Things like don’t flash wads of cash, don’t leave your wallet and expensive Iphone unattended at the beach, don’t act like entitled white people!

I am reminded yet again of the Trump supporter I know that heard I was moving to Costa Rica and said that they could not come to see me because of ISIS terrorist. Laughed hard that time too. Too bad she’s not traveling because she might actually have to learn something. Travel kills ignorance and fear pretty effectively.