At least that is what The Transformed Wife Lori Alexander might have you believe. She is going to rather lengthy heights to demonize the Democratic presidential candidates in the wake of this week’s Democratic debate. She almost sounds like she is about to bust out that old fundamentalist trope about Democrats eating aborted babies for breakfast.

It’s sickly amusing that every single time there is something major happening with the left people like Lori Alexander and Doug Wilson trot out the inanities that make you seriously question their mental fitness and intellect. 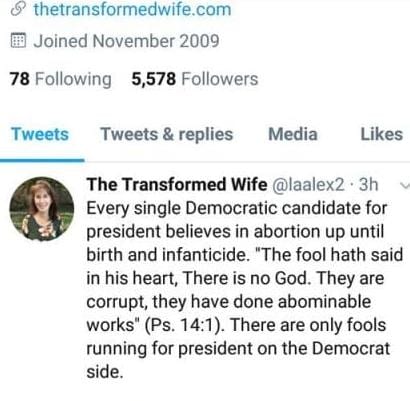 Without even looking up the candidates positions I’m pretty sure that none of them approve of killing a baby, or as Lori puts it ‘infanticide’. That is still quite illegal in all states, and likely should stay that way. You are born, and it becomes illegal for anyone to take your life. Just silly she goes there.

But then again this is a woman that believes this as well: 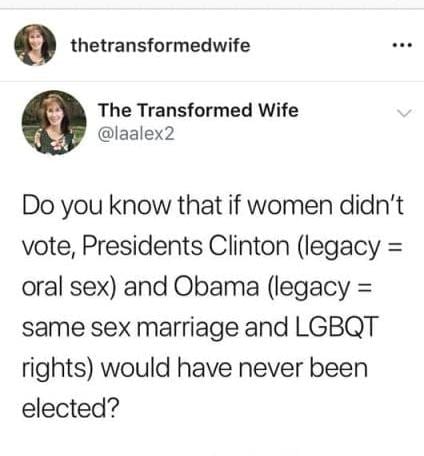 Sounds like the same old detritus the Republicans were saying all the way back in the 1960s when John F. Kennedy was elected. Even that far back it was said that women voted for him in droves because he was handsome.

This is how old white men picture women, voting women and women to the left of Goldwater. Brainless subhumans voting with their lady parts.

It’s pretty safe to say that most of the Democratic candidates endorse the notion that women should be the only ones to decide their own reproductive lives, to chose to be on birth control, or to have an abortion. They uphold and support Roe v. Wade as the law of the land.

There has been almost no talk of abortion at any of the Democratic debates so far. It was not raised at Thursday’s debate, soundly ignored yet again. It’s problematic this early in the debates even if 79% of Democrats polled in Iowa said that reproductive freedoms are one of the most important issues.

They do not eat aborted babies for breakfast, lunch or dinner. Late term abortion, the term used for what Lori is calling ‘abortion up until birth’ is something of a misnomer. That label is misleading and imprecise. About 1.3% of all abortions would fall into that category, not precisely a tsunami of murdered infants. Very few.

This idea of abortion moments before giving birth is at best fake news, weird sound bites our president Donald Trump and others use to hype up their less than factual based supporters. Here’s what it really is and how this belief started from the Washington Post:

“No, absolutely, no if she is in the middle of giving birth. That’s not how medical care works,” said Jenn Conti, an abortion provider in San Francisco and fellow with Physicians for Reproductive Health. She called the idea “sensationalized fake news” and said she believes a lot of the confusion comes from the use of the term “late-term” abortions. It’s “intentionally vague,” she said, so even though later abortions typically take place at the end of the second trimester people may believe they are much later in pregnancy.

President Trump repeated the misleading assertion in his State of the Union address, stating, “New York cheered with delight upon the passage of legislation that would allow a baby to be ripped from the mother’s womb moments before birth.” The New York law allows for women after 24 weeks of pregnancy to get an abortion if “there is an absence of fetal viability, or the abortion is necessary to protect the patient’s life or health.”

The only exception to Democratic approval of keeping abortion safe and legal might just be former Vice President Joe Biden. Joe has been all over the map on issues of women’s reproductive health for many years, voting to overturn Roe v. Wade more than once. His stance is not so clear cut and defined as the others running to be the Democratic nominee.

So here we are, another day ending with ‘day’ that features Lori Alexander openly lying yet again.  So Jesus like, so compassionate, so understanding. Several days ago Lori told a mother who uses birth control because she’s been warned that another pregnancy would kill her that this mother is not trusting in the Lord. That she should eschew birth control, and leave her life in the hands of God.

For the record I would never have an abortion and I never have. I don’t like abortion. But…. I would never presume to tell anyone else what they must do. Every woman must make this hard decision for herself without the influence of men who never once have stood the terrible risks of pregnancy. I will stand with others who decide differently than I.

In a perfect world every baby would be welcomed, loved and wanted. But as long as we live in the perfect imperfections of the real world where women are raped, and 12 year old girls are molested by their stepfathers it’s vital to keep abortion safe and legal.

While going into imgflp to make the Lori meme above I ran into this. So I leave you this morning with a silly laugh. 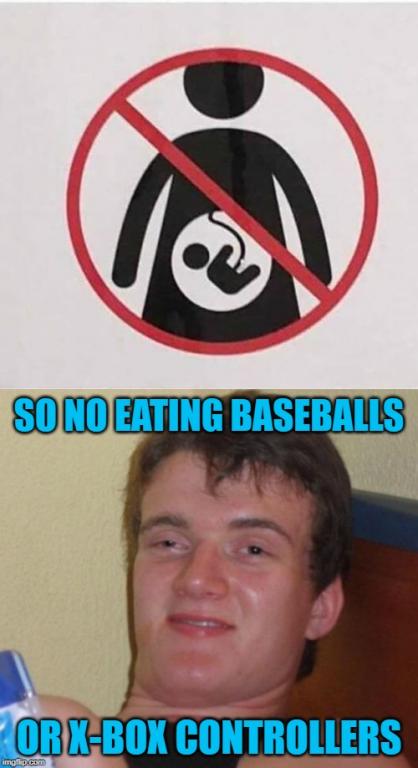 and now I cannot see the baby, just the ball and X-box controller.