This statement of Larry Solomon’s just gobsmacks me. It sounds like something out of the Hulu television show “The Handmaid’s Tale” with women being forced by evil Evangelical government to conceive and give birth to babies they do not want. Forced births. This was lurking in the comments of a piece where Larry is decrying plummeting birth rates titled “The Global Fertility Crash” 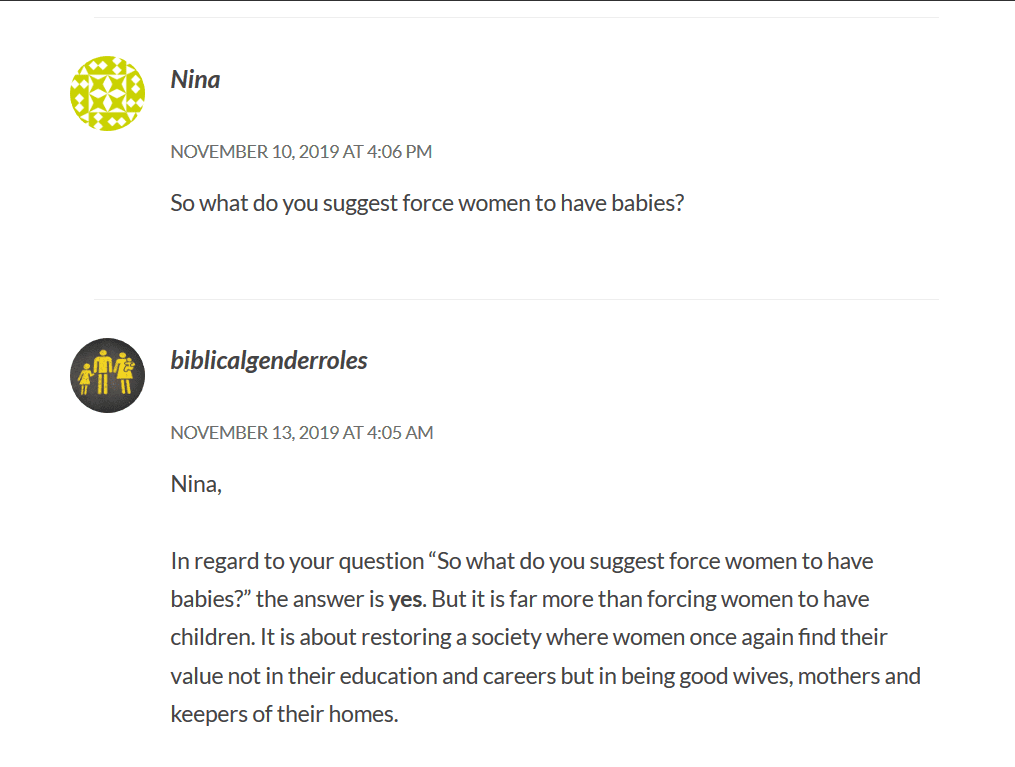 Seriously? Enslave half or slightly more than half of the population and breed them like animals. That’s what Larry is speaking about here. Dear Larry, look out how well that worked out for the Nazis. It didn’t. It’s not even working out well in the fictional Gilead of “The Handmaid’s Tale”

Remind me if I’m wrong, but does not the U.S. Constitution talk of the pursuit of life, liberty and happiness instead of forced births?

Larry loves to point out what he perceives as ‘selfish women’ demanding education, property rights, full voting rights, in other words any woman that wants all the same basic human rights and dignity as a man.  He thinks that’s the problem.

Look, I am not disputing that rates of child birth have fallen. That would be stupid when all the legitimate studies show that they have fallen. But his panic and the panic of other good cultural enforcers is a bit premature. It’s impossible to say what the long term effects will be in a society that is rapidly changing in how we literally do everything.

As the larger sectors of population age this might become more of a problem as someone needs to be available to care for those who cannot care for themselves. Babies and the elderly require much hands on care. It’s already starting to happen in parts of Japan as rates fall.

Here’s where Larry gets it so horribly wrong. The answer is not stripping women of all rights, and returning the world to a master/slave dynamic in marriages. That’s simply short-sided. I believe that the answer is better paying jobs and more opportunity.

Many people seem concerned about the state of the world, feeling pessimistic, rating their chances of having a life that includes a partner and children as low. The main reason is economic. It’s the economic, stupid! To paraphrase a former president.

We’re seeing a time when wages have been severely stagnant for over twenty years, yet rising costs do not reflect that reality. The young, the fertile, those entering the work force now have a much slimmer chance of even being able to financially support themselves, much less a future family. Buying a house? Out of reach for more people that ever.

Even as recently as the 1970s the working poor owned homes in greater numbers than they do now. Now it’s out of reach for many unless they inherit a family home.

Used to be you didn’t need a college degree to have a decent paying job. A high school diploma could score you a good position in the manufacturing sector, enough of a living wage to have a family. Now we’re seeing positions even in retail that require a four year college degree that once required only that high school diploma. Jobs that required a bachelors now insist on  a masters degree in that field.

Until this economic situation is addressed people aren’t going to be buying homes, having families, or even marrying. I don’t know exactly what the solution to this will look like, but I know it is not forced birth and keeping women as house slaves.

This is the reality of many years of Republicans being allowed to gut our country of worker protections. Larry et al is partially responsible for the same crisis he is decrying by the way he has voted through the years. This is what happens when you have an ignorant voting base who likes to blame women for every evil.

How We Won With No Apologies: Starting From...
Let's start this from the happy ending. My child fought their own...
view all Nonreligious blogs
What Are Your Thoughts?leave a comment
Copyright 2008-2020, Patheos. All rights reserved.