Is Ken Alexander a  transformed wife?

I have been restraining myself from writing about the toxic gruesome twosome of the Alexanders over the past few days. Ken and Lori Alexander have both pushed the unhelpful narrative latched onto various Republicans that old people and those with preexisting conditions need to just die already. I was watching both of them talk about it with a large dollop of ironic laughter. Ken and Lori are both over the age of AARP members, and both have had serious medical challenges. They don’t realize, funnily enough, that they are both speaking of themselves as well as everyone else.

But this morning Ken Alexander went back into familiar feminist hating territory and fed Lori’s hateful male cheerleader squad some red meat. He’s busy mansplaing feminism to a bunch of hate filled members of the Manosphere. This is the biggest pile of codswallop I have seen in eons. It’s piled high.

I guess he’s just miffed that California and the San Diego area extended their shelter in place orders after he and Lori traipsed around the beach with thousands of others in violation of the law.

“Fortunately, the Coronavirus, so far, has only one main mutation that we know of, but the Feminist virus that has found the Church appears to have many. There are many victims as Feminism has infiltrated culture and the Church, from husbands, wives, and children. Even grandparents are not immune to the effects of this unrelenting virus as families are torn apart. But one of the offshoots of the virus are husbands who are victims are trying to coach other young Christian men to go their own way and no longer marry.”

Someone is rather sore in their derriere region. I have to wonder why. This has to be the strangest twist I’ve seen on the COVID 19 yet. All week Lori Alexander has been discussing in her chatroom the fact that a large wave of Chinese women suddenly filed for divorce this week, trying to link it to the shelter in place orders of the Chinese government. I guess she thinks that too much quarantine together is driving this instead of what it likely is. A Chinese government that has been nearly at a standstill for nearly 90 days, and this is the first point at which one could file for divorce. 90 days worth of filing in one single day. That would skew any number.

Ken follows all of this by whining and complaining about how those poor poor men commenters of Lori’s are an abused and put upon lot, suffering at the hands of evil feminists.  The truth is that Lori seems to attract the absolute bottom of the barrel abusive men who bring this upon themselves by their own actions.

“the one who has done the heavy lifting of earning more, usually the husband, gets stuck with alimony and child care, and too often loses custody of the children by decree or by practicality.”

Dear Ken, you cannot have it both ways. Either you are the Godly man provider, like you and Lori rant on about being ‘Biblical’ with a stay at home wife and that means the man will owe at the very least child support. This is the same tired argument that we have had many MGTOW guys show up to make. I will say what I always say to the guys that complain about having to pay child support.  If you don’t want to ever pay child support, do not lay down and make children! It’s as simple as that.

Any woman (or man) that would trick you into having a child by deliberately damaging their birth control is not someone you should be in a relationship with. That is considered reproductive abuse. What Lori did to Ken falls under the guidelines of domestic abuse via reproductive coercion.

As far as the alimony goes you just cannot have it both ways. If you insist on woman having no secondary education, no marketable skills, no certifications (but Lori keeps her teaching certification updated, go figure..) this is the outcome you can expect. The law recognizes that having a highly skilled working man, which the Alexanders state is “Godly” and a wife kept unemployable you will see the law recognize this inequity and address it accordingly.

Ken rattles on and on about the evil that women do when they divorce their husbands, and tells a ridiculous story that supposedly came from Michael Pearl about a poisonous snake. He keeps talking of counseling guys leaning towards MGTOW. Then he says this:

“Oh, if only difficult wives and husbands would find this antidote before they divorce, as my wife and I did some 15-20 years ago when we found our new lives in Christ.”

I’m not any bigger fan of divorce than Ken or Lori, but I am pragmatic. I recognize that sometimes abuse happens, or one partner violates the boundaries of the other partner’s trust and it cannot be fixed. Sometimes it’s actually kinder to end the marriage, the misery and torment for everyone. As long as we live in an imperfect world with broken people just trying to live their lives to the best of their abilities then divorces will happen, sometimes for very good reasons.

I remember at my old church a lady whose husband sexually abused their teenage daughter. He’d been raping her for years. She refused to divorce him, even as the pastor said it would be understandable and fit the definitions of Biblical divorce. She waited for him. He came out of jail, and they resumed their marriage. For a while at least, right up until it was discovered he was now raping the other daughters.

Even in a Quiverfull church who believed in no divorce there are circumstances where divorce is the right move. This would have been one of those, sadly enough, and would have prevented the trauma to the other daughters. This mother failed to do what was needed to protect her children because she was so fixated on the no divorce ever ideas placed in her head by religion.

What Ken is saying here about his own marriage just makes me so sad for him. He and Lori have been married since the early 1980s, meaning that at least twenty years of their marriage was horrible for both of them. We know there was reproductive abuse/coercion on the part of Lori, and that she admits continually nagging him about what he put in his mouth. So much of what Lori said in her first book “The Power of the Transformed Wife” about the early years of their marriage sounded like misery on her part, her wanting him to read her mind, obey all of her ideas.

Please, please, please do not settle for this type of misery. Get help. There are plenty of good marriage therapists out there. It does not have to end in divorce, no matter what Ken is claiming here, nor does it have to continue to be pure misery.  A little love and mercy can go a long way. You’re supposed to be married to your best friend, and who wants to hurt their best friend?  Marriages have their ups and downs, but a state of years of misery is abuse and dysfunction.

Below are the comments on Facebook this post had evoked.  Almost every single comment is some angry controlling abusive guy that follows Lori. Funny how she claims not to be teaching men. 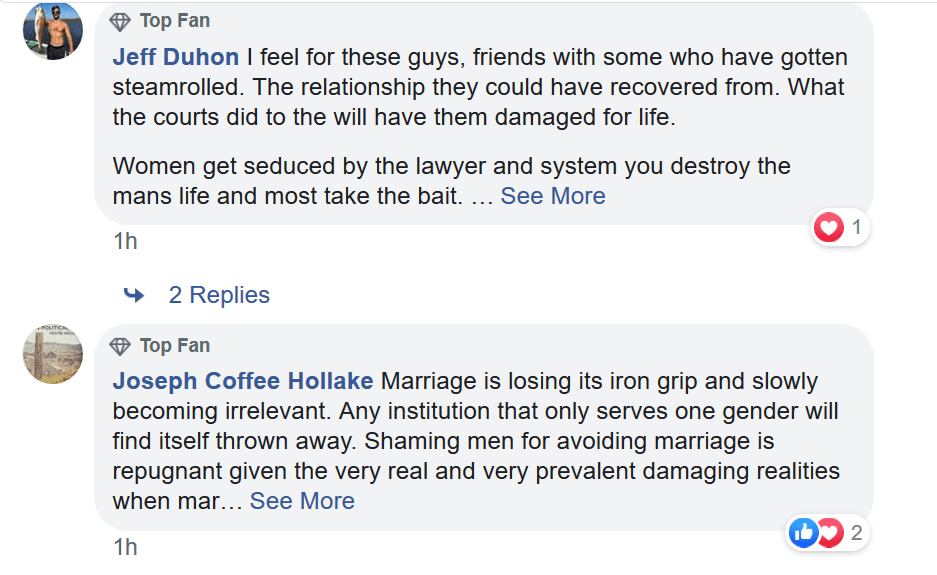 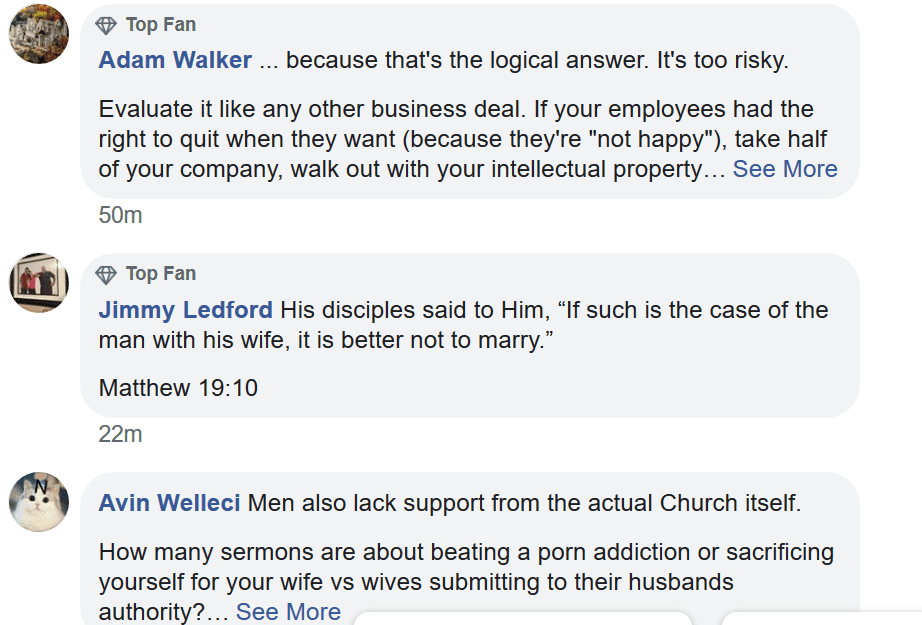 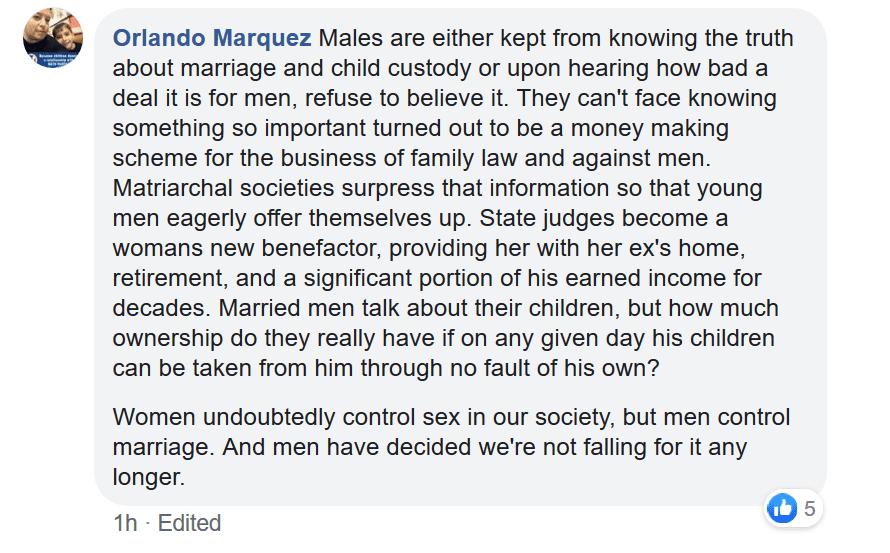 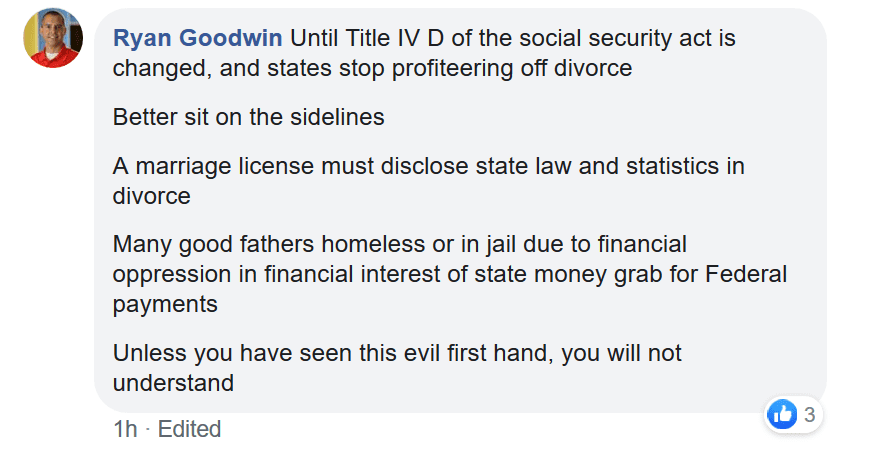 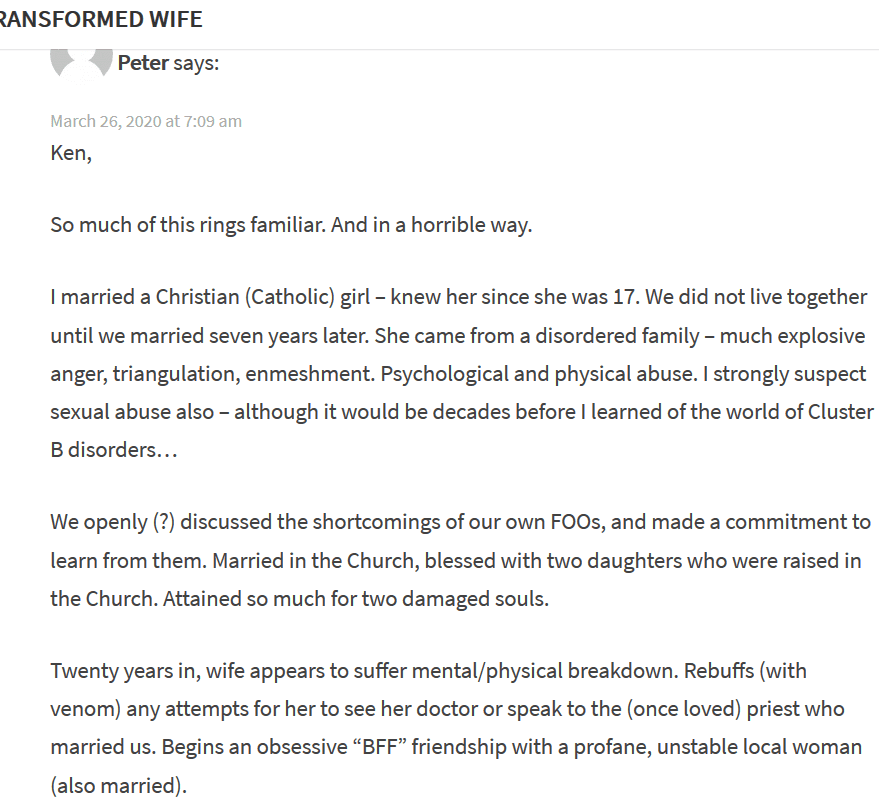 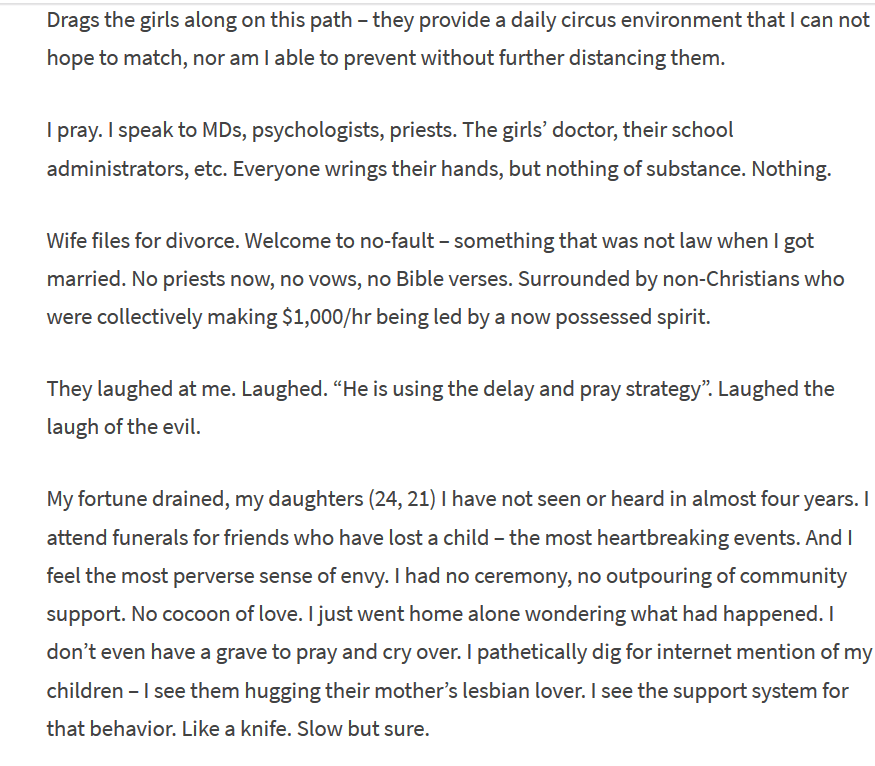 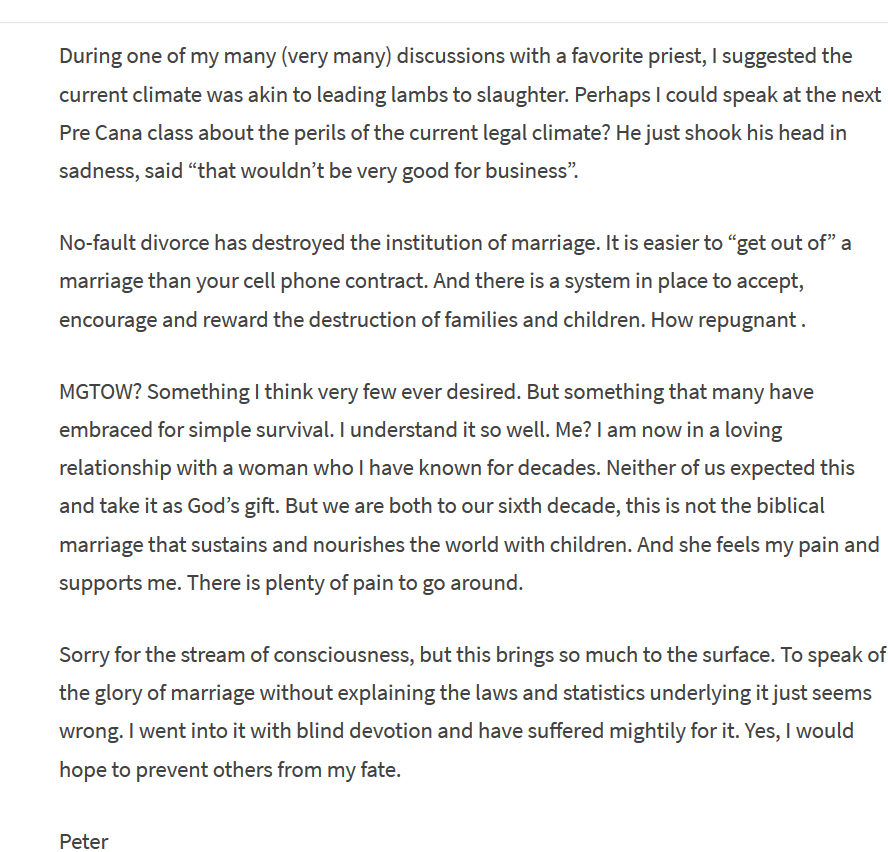 Quite the rogue’s gallery of men you should always avoid. None of these men have any business ever being married.

You can also assume that comments here are always open to off topic and the COVID 19 discussion until this is over.  Even this post.

March 26, 2020 Josh Duggar's Attorney Disqualified to Represent Him
Recent Comments
53 Comments | Leave a Comment
Browse Our Archives
get the latest from
Nonreligious
Sign up for our newsletter
POPULAR AT PATHEOS Nonreligious
1