How COVID19 Reveals the True Pro-life Stance of Quiverfull

There is a section of Scripture that says that true, undefiled religion manages two things: 1.) to help widows and orphans, and 2.) to remain pure from the influences of the secular world. I often think that Quiverfull believes that helping people with messy problems falls secondary to their striving for their own purity. They either toss platitudes and superficial aid at the needy, or they offer aid only to those in their own camp. As they cloister their children to sanitize their lives, I see running, hiding, and following rules that promise to circumvent the tension and reduce the hard work of thinking that life requires of all.

I recently recalled how a multitude of people thronged to see Jesus, and He is moved deeply for them because they were “scattered” like shepherdless sheep (Matt 9:36). English cheats us of the insight of the original language which connotes a quick act of disregard that one feels for trash when it is thrown away. I also remembered a minister who said that when he went to the Holy Land, he asked God to speak to him if the religious tourist attractions were the real places where events actually took place. Near the end of the trip after feeling nothing regarding his prayer, he saw some pathetic looking children along an obscure, trash-ridden roadside. He wept when overwhelmed with God’s love and heard in his heart, “I spent a lot of time here.”

I could fill a book with reasons why so many Christians seem to have disregarded COVID19 precautions, but today, I will mention only this. The threat reveals the hearts of people – about what and whom they value. Competition for survival often pushes us human beings to think tribalistically when society suffers a crisis. We gravitate to those who are like us, and we might consider that they are “Not Our Kind.” Crisis becomes a way to bolster self-esteem by demoralizing or dehumanizing others to make their own tribe seem ideal.

I read recently that Jill Rodrigues published more photos of [her questionable version of ] social distancing to gloat that her county officials in public health cannot counsel her about pathogen transmission. I think that any gloating over exploiting religious liberty just proves my thesis about the allegedly pro-life stance of Quiverfull. Not all life is sacred – only some lives. Death and disease ‘prove’ to this cultic elite that God deems some lives worthless – and it reveals the sad truth to us that they aren’t very pro-life at all. “Some are more equal than others.” 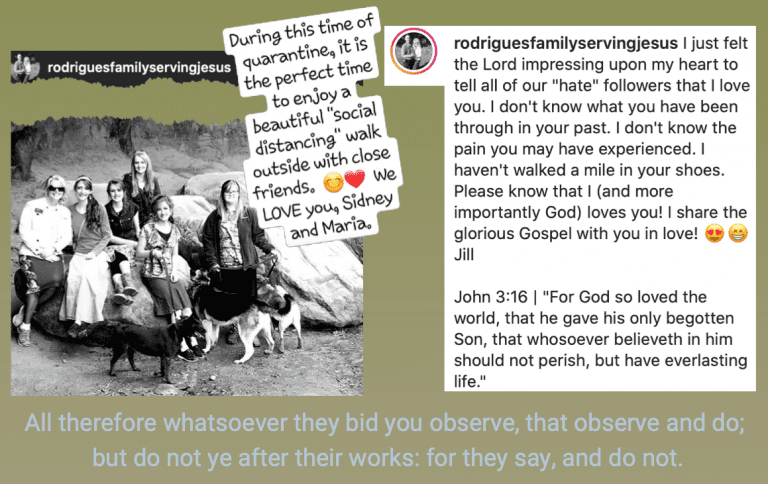 I want so much to believe that true Christian love resides at the center of those in Quiverfull – and that good people who got swept up in it are not heartless. If they truly know Jesus, then when they see the p19eople who religious shepherds see as unimportant creatures, they will well up with aching love and compassion for those discarded scattered souls in their suffering. Every person in society would have worth to them, and it would be a gracious act of worship to God to help to preserve people’s health when it is at such grave risk. Instead, my heart breaks at the spiritual pride of so many who have no regard for the bodies or souls of ‘not our kind.’ When I see the aloof attitude that some people take in the name of their religion, they negate everthing that they claim about loving those they deem lost.

Please feel free to post about COVID 19 on this thread.

Nonreligious
Toxic Marriages Seem to be the Default Setting?
No Longer Quivering
TRENDING AT PATHEOS Nonreligious