Why the Bauchams and Alexanders Grapple with Empirical Truth

Why the Bauchams and Alexanders Grapple with Empirical Truth June 9, 2020 Suzanne Titkemeyer

Quiverfull (QF) advocates Voddie Baucham and Lori Alexander find common ground in their pessimism and power paradigms, but they also share a common style of reasoning. While attempting to put a philosophical universe into a blog nutshell, I hope to show how issues like social justice, mental health, and COVID-19 generate QF ideas that boggle the minds of outsiders.

If you are already familiar with the Van Til-Clark Controversy, it helps to note that I’m more like Van Til who was alleged to prefer empiricism over biblical truth. QF prefers Clark’s position that was criticized as anti-intellectual/anti-empirical. I offer this too curtailed summary of a complicated topic here as a description of relevant styles of thought. In this recent discussion of social justice, I see Baucham‘s and the Founders‘ positions as QF/Clarkian, and this rebuttal as more Van Tillian.) Rome also condemned Galileo for accepting science as truth (like Van Til argued), alleging that it challenged the Faith.

Let me start with my Coherentist style of understanding. I begin with my conviction that truth will not only meet theoretical standards; its validity will also be reflected in and supported by the empirical world. I perceive truth as transcendent in all realms of existence, and I expect a truth in one domain to validate truth that arises in another 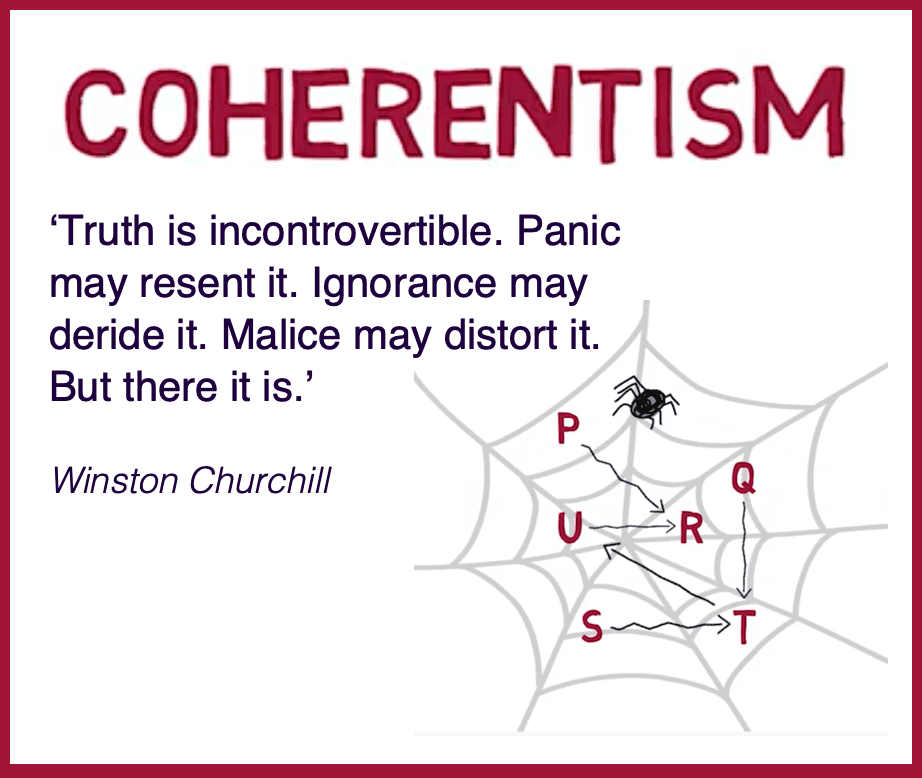 I arrive at truth by using criteria to vet it (the most significant of which for the Christian is Bible). A truth must be reasonably logical, observable (as reflected in the ‘fruit’ it produces), and relevant to life. When empirical information doesn’t dovetail with Scripture, I consider that my understanding of the evidence is limited or the causality that I assigned to it as flawed. (Rarely do I find contradiction or competition between faith and science.)

QF prefers a linear process of Foundationalism which only becomes problematic if one winds up in its inherent pitfalls. Foundationalists will eventually work back to a truth that needs no justification. Truths that emerge as basic become the foundation stones upon which the house all other understanding rests. It tends to prevent the discomfort of the ambiguities that Coherentism cannot resolve (and QF hates ambiguity). And scientific truths may never be placed on par with Biblical theoretical truth because the Bible is all-sufficient. Incongruence becomes a competition. For the Foundationalist, Christianity demands that the Bible serve as the source of tools used to solve society’s problems (like racism), and the connections to the Biblical paradigm must be explicit and direct. Jesus reconciled all races on the Cross (conquering the sin of race hatred), so the ultimate and ‘Biblical‘ solution involves transferring everyone into Christ’s family through faith. 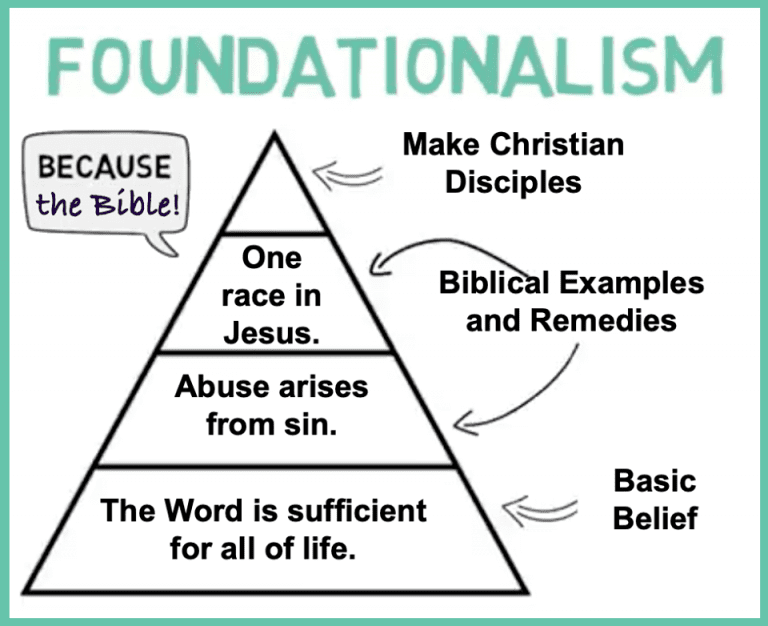 The solution to conquering COVID comes through faith in God, not via scientists. The Blood of Jesus and gathering for worship should prevent and cure harm. Thwarting God’s solution declares that man’s scientifically-based measures override God’s providence and wisdom. Mental health concerns as defined by the Bible must be solved through interventions found therein, so medication becomes a choice against God in favor of science.

(The subject of related logical fallacy problems must keep for another day.)

Editor’s note: This all is very interesting in light of what we are hearing coming out of Lori and Ken Alexander’s family right now. They appear to be on their way to their yearly family vacation in Door County, Wisconsin. Notice the lack of tweeting and banning?

Several weeks ago Ken’s father died in Paris, France, and there was speculation that because of France and the world being on COVID 19 lockdown that neither Ken nor Lori would be able to attend. Looks like Ken did go, France was granting exceptions for family funerals per their own website. 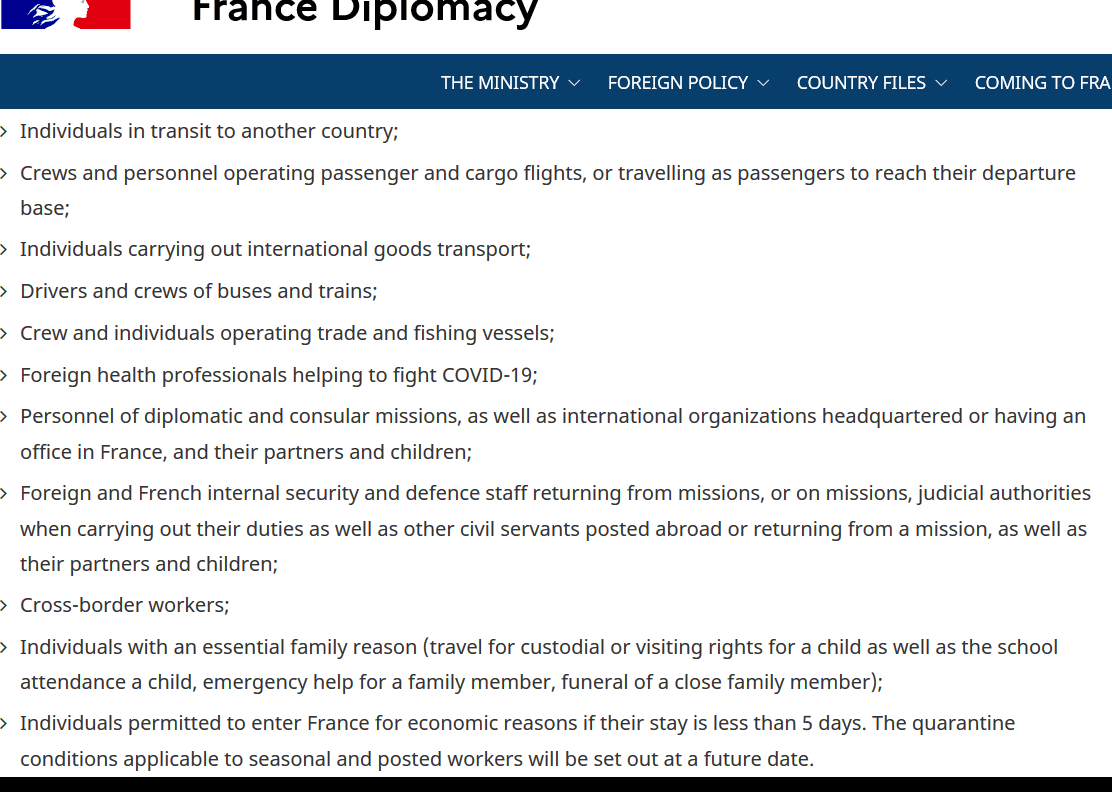 Screen shot from the French embassy website in English.

Good for Ken. No indication that Lori went, which I would normally decry as unsupportive, awful, selfish and a myriad of other negative things right up until I took a look at the prices on the few flights from the States to Paris. Prices, like they are here, are running starting at $1,500 each to over $5,000 each. Pricey if it is essential travel.

The very curious thing about all of this is per another family members remembrance the elder Alexander died of COVID 19, while Ken is rushing about trying to claim it was Malaria or Dengue Fever.  Both of which there are treatments for, and medications to take to keep long term outbreaks at bay. We have dealt with Dengue here too. My husband had it recently. Ground up Papaya leaves for a few days and he was fine. It’s a threat definitely but Dengue ain’t COVID and does not even have the same symptoms.

It is interesting to note the Lori suddenly shut the heck up about COVID around the same time as her father in law passed.

Just like you cannot enter Costa Rica if you are not a citizen or a resident you cannot just enter France either during this pandemic.  If he’s not Ken then why would he be in the same place at the same time? I smell a lying liar. 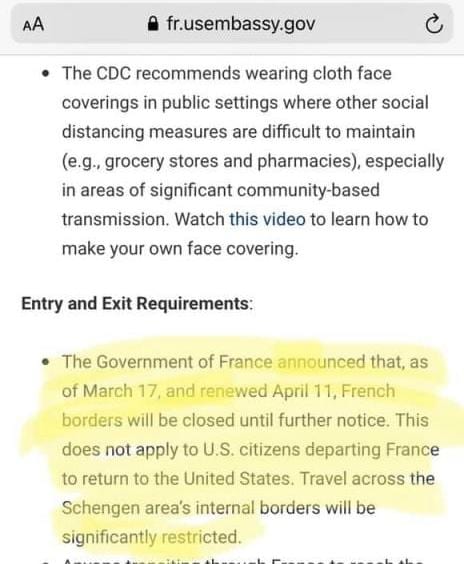 June 10, 2020 Timmy and Jill Rodrigues - The Real World Consequences of Over-Involved Parenting
Recent Comments
0 | Leave a Comment
Browse Our Archives
get the latest from
Nonreligious
Sign up for our newsletter
POPULAR AT PATHEOS Nonreligious
1