For the past week I’ve been looking to see how the Quiverfull response was going to be over the nominee our president Donald J. Trump to fill the late Ruth Bader Ginsburg’s Supreme Court seat. He picked Amy Coney Barrett, a woman who is a devout Catholic, who seems to be Quiverfull herself with seven children, with two adopted from Haiti.

Barrett belongs to a Catholic spin off group called People of Praise. This is a group that is rumored to be a major inspiration for the world of Hulu’s “The Handmaid’s Tale”. Extreme gender roles, and the entire belief system. I’m not going to rehash that here, because other media sources have already taken a good look at this group.

Amy Coney Barrett is a contradiction in Quiverfull beliefs, she belongs to a group that believes in mothers at home raising children. While she’s a working woman, working as a professor, and a judge.

Lori Alexander just spoke this morning on her thoughts, and I will say at least Lori is consistent.

“President Trump nominated Amy Coney Barret to the Supreme Court of America on Saturday. The many pro-life conservatives are extremely excited. I am a pro-life conservative. I want a judge like her who loves America and the Constitution. However, I am sad that she will be unavailable for her seven children. The job that she will most likely have is time-consuming and will keep her away from home a lot.”

Sticking to the party line I see. Not surprising.

She goes on to blame, shame and point fingers, claiming that a man could not be appointed to the Supreme Court because they would be falsely accused of sexual abuse.

“The Left will make up all types of stories of sexual assault/harassment/rape for any conservative male nominated to the court. In this way, they will be able to put and keep women in control. Their slogan “The Future is Female” is what they want. Of course, they will do everything in their power to destroy Amy Coney Barret’s character, since they are Satan’s agents whose goal is to kill, steal, and destroy. We must pray for her and her family.“

While it is never a bad idea to pray for those in power if you are a believer, this is a completely false narrative about the left involving false sexual assault accusations. Do you now what the percentage of false allegations of sexual abuse is? Studies have shown that false allegations are between 2% and 6%, very low.

If candidates are being questioned about sexual assaults it’s likely they did commit them. It’s a valid concern that must be addressed.

“Amy will hopefully be a wonderful Supreme Court Justice. She is the complete opposite of Ruth Bader Ginsberg which is great, but it’s an indication where our country is headed. She was praised for being the first Supreme Court Justice who had school age children. This grieved me. They will miss her constant influence in their lives, since no on will be able to take her place in their lives. Also, her husband must fill the role of help meet to her instead of her being his help meet.” 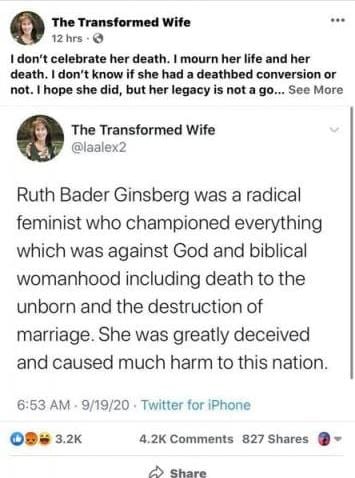 Not the words of a decent kind woman.

September 29, 2020 Voting Guns, Rebellion and Trump - Duggar Style
Recent Comments
0 | Leave a Comment
"This is late, partly bc of my preoccupation and partly bc I'd been slowly reading ..."
Jennifer Serena’s Serenity – Luxury Hotel, Birthing ..."
"Thank you for your commitment to truth and love, Suzanne. Best wishes to you and ..."
Meredith Anne Not a Goodbye, More of a ..."
"For what it's worth, I've learned a lot from you about a Very Creepy movement ..."
Gwen Pryce Not a Goodbye, More of a ..."
"Unfortunately, this kind of satire (if it even is satire) is what gives Christianity the ..."
Emily Is Biblical Gender Roles a Big ..."
Browse Our Archives
Related posts from No Longer Quivering