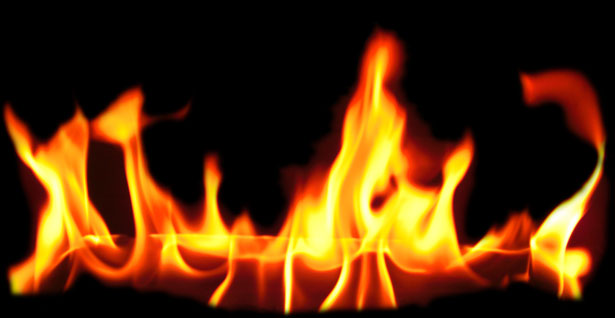 Smoke had filled the kitchen before I figured out where it was coming from. I had thrown the oven mitt on top of the stove, and then accidentally turned on the burner underneath it instead of the burner under the pot on the back of the stove. The hot electric rings had burned themselves into the non-flammable mitt, and the blackened edges of the material glowed.

I turned on the fan over the stove and tossed the smouldering mitt out the back door and went on with the day. About half an hour later I peeked at the mitt and found that it had continued to burn, right down through the non-flammable layers and into our wooden deck. I filled an old ice cream bucket with water and doused the whole thing, but it was a little late. The deck now has a burnt area the size of my fist. I thought that was the end of it, we hadn’t made a big deal of the incident, I explained the danger of fire to the kids who were asking about the smoke, and we put the fire out. No screaming, jumping up and down or telling tales of doom.

But my 4 year old wouldn’t stop talking about it.

At first Ms Action just re-told the story of the kitchen fire again and again. “That glove was burning mom? Your glove was burning? And then there was a fire on the porch! But you could put it out, so it was OK. But if the fire was too big for you to put out we have to call the fire truck! And we go out of the house and wait until the fire gets put out.” I let her tell the story, acknowledged her points and chatting about it. I thought after the excitement died down she would move on to something else, but several hours later she was still talking about the fire. The repetitive process of her talking about fire and me affirming her feelings was starting to be somewhat irritating and I was starting to wonder why this had been so upsetting for her, when suddenly her story changed.

“Mom.” She stopped and thought for a minute.
“One time, when I was little, my baby sister fell into a fire and she got really really hurt.”

I was puzzled at first, what was she talking about? None of our kids have ever fallen into a fire, or got any kind of substantial burn. I reassured her that no one had gotten burned, and that mom and dad were always there to watch out for all of our children to make sure that they didn’t get hurt by a fire. She shook her head and repeated intensely, “No, when I was little, my little sister fell into a fire and burned her hands!” Memory flooded my brain and I wondered if I knew what she was talking about, my own little brother was the same age as Ms Action, and one time on a family camping trip he had fallen into the fire pit and badly burned his hands. But that had happened over 3 years ago, Ms Action would have been about 18 months old. She had been standing right next to my brother when it happened, but how could she remember that?

I asked her if she remembered when her little uncle got burned, and she started to cry. She told me that it was scary that he had gotten so hurt, and something about how his hands had to be bandaged and he couldn’t play. I could still hardly believe she was talking about something that had happened when she was so young, but relieved that we were finally putting our finger on what was bothering her about the fire incident that afternoon. We snuggled on the couch and talked about how scary it is when someone gets hurt, and how there are Drs to help people who get burned. I reassured her again that her mom and dad are here to help her stay safe, and that we would take care of her if she ever did get hurt.

She told me that she was afraid that when she went to bed she was going to have a bad dream about fire, so we talked about dreams, and how even though they are scary they are not real. I reassured her that if she did have a scary dream and woke up I would be right there to hug her. Eventually she hit on the idea that if she was having a scary dream, she could change the dream into a nice dream or a silly dream instead, and she felt better. She went to bed easily that night and never woke up from bad dreams.

The conversation that had started with the small kitchen fire early that afternoon, had ended shortly before bedtime. For most of the afternoon I was doubting myself, did she really need these feelings recognized? I stopped myself again and again as I instinctively wanted to tell her that a big fire will never happen to us, and that she needed to forget about the fire and do something else. I worried that I was making it worse by letting the conversation continue for so long. But in the end, validating her emotions paid off when we got to the root of the fear, and then resolved the nightmare issue.

It still shocks me that she remembers something from such an early point in her life, it just goes to show how much early childhood matters. And it makes me wonder. Does she remember having her hand smacked again and again and again when she was 10 months old and kept going back to empty the garbage can. Does she remember when she was 14 months old and I hit her legs every time she stood up in her crib to “train” her to go down for her nap? Like this moment from almost two years ago, when she remembered what the spanking spoon had been used for, these thoughts bring tears to my eyes. How could I have treated my own babies this way? 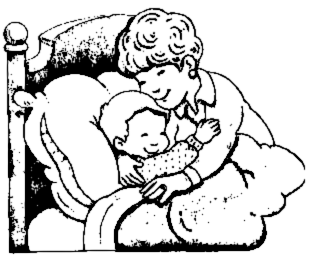 But this also gives me hope. How many things happening today will she carry with her for the rest of her life? Her life, her memories, are being shaped right now. The hugs and snuggles, making messy treats together in the kitchen, all of us waiting breathlessly to start our Advent calendar and then for St Nicholas Day, these are the moments that make her memories. Every time I stop myself from yelling, is a moment that shapes my children. Every time I manage to keep my frustration at bay in the middle of the night and gently tuck that restless baby back into bed, that is a moment that shapes my children. Each moment is an opportunity to shape their knowledge that they are worthy of love, worthy of respect, worthy of my time. And that in turn, shapes their understanding that others are worthy of their love and respect.

I love this post from Emerging Mummy where she talks about how we are always all of our ages, because I know this is true of myself. Inside, I am still the trusting toddler, the excited preschooler, the explorative creative grade-schooler, and the depressed wistful teen.