If you read this blog regularly, you know I love food traditions. They’re strewn throughout my year. (See the posts on my Shrove Tuesday pancake alternative, and Hanukkah latkes.) With Holy Week and Easter comes another for me: hot cross buns. It doesn’t date back to childhood. The Easter celebration in my atheist home consisted of dying eggs when I was very young, and nothing at all later on. But somewhere along the way, I connected through my heritage with this distinctly British Christian food tradition.

The link between faith and food runs very deep in Judeo-Christianity, of course. As Emily Scott pointed out recently, in Luke it seems like Jesus is always either sitting down for a meal or getting up from one. And of course the Eucharist is a sharing of bread and wine. Beyond the act of sharing, food traditions establish sense memories, which are the strongest kind. Marking annual events with specific foods is powerfully grounding. If it’s Thanksgiving, I’m having turkey (and stuffing, and yams, and cranberry sauce…); Christmas means ham; the Superbowl is nachos; if it’s my birthday, I’m having lasagna. And every Easter, I know I’ll be having two things: hot cross buns and deviled eggs. (I don’t even want to start unpacking the religious significance of celebrating with deviled eggs.)

Here’s my recipe to make the hot cross buns in the picture. I started with this great recipe, then adapted it, and rewrote the intructions to make things simpler. The biggest problem for most non-bakers will be acquiring all the spices, but it’s pretty simple from there on. Enjoy! Note, I’ve seen some “light” recipes out there. For the record, these hot cross buns, because they’re intentionally not that sweet, are only 165 calories each, which is less than some of the “light” ones I’ve seen.

1 teaspoon milk
3 to 5 tablespoons powdered sugar
==OR, instead of milk and sugar==
white chocolate chips

Besides loving to share a sacred meal every week at St. Lydia’s, I love cooking it, which I get to do once a month or so. Though it’s stressful to prepare a meal for 50 people, it’s deeply satisfying to provide for others. Easier and more fun is making one traditional holiday food. Hot cross buns are perfect for this.

For years, I’ve been bringing hot cross buns to an Easter brunch gathering of family and friends. (Good Friday is the traditional day, but Sunday is when we gather.) I had never tried to make them, though, because as much as I love to cook, I’m not a baker. Baking and cooking, at least the way I cook, are different. Baking is chemistry. All the work is up front; there’s no tasting and adjusting when it’s in the oven. In most cases, you measure and mix everything precisely. Plenty of people cook like that too, but I like to approximate and taste and adjust. I just never got a feel for baking.

But last year, in part because I had this direct connection through St. Lydia’s between my spiritual practice and making food for others, I decided to take a stab at making hot cross buns from scratch. I could bring some to St. Lydia’s Easter Vigil feast, and then bring more to the family brunch on Easter Sunday. The hot cross bun is not complicated to make. It’s a simple spiced bread. Its distinguishing features are:

Hot cross buns are convenient to bring to a pot luck, family gathering or church event. They can be made a bit in advance (but not more than a day or they’ll start to get stale; and they travel well (as long as you protect the icing). I’ll be making a big batch again this year on Saturday — to bring to the Vigil feast and Easter brunch. If you’ve never made them, my recipe here is a straightforward one to get started with.

An offering to Eostre

A lot of history and mystery surrounds the hot cross bun. One thing we know for sure is that it began in England. When and why, though, is its first mystery. The hot cross bun probably began as a tribute to Eostre, the Saxon goddess of light, after whom — as you might guess — the Christian holiday is named. April was named after Eostre in Saxon, because it marked the return of the dominance of light following the vernal equinox (which I wrote about here.) Eostre is probably derived from the German goddess of the dawn, Hausos, who was also tied to fertility and linked to rabbits and eggs. (By the way, to any scholars out there, I know the specifics of Eostre’s roots are disputed, and mostly based only on the unreliable history written by St. Bede, but the link between Easter, Eostre, Hausos, Spring and new life, bunnies and eggs, seems pretty solid.)

Note that English-speaking countries call this holiday Easter and modern Germans retain Ostern, but all the Romance languages use a variation on Pascha, a Latinization of the Hebrew Pesach. So while most of the Christian world rightly calls this holiday (with its Paschal lamb) Passover, after its Jewish roots, those of us in Germanic countries use the name of the German goddess of light. (A few others use derivations of the Greek anastasia, which means resurrection.)

Even the cross on the bun wasn’t originally a reference to the Christian story, but an ancient Celtic symbol — the Celtic cross with equal length bars represents the intersection of earth (the horizontal line) and Heaven (the vertical line), the human and divine. This meaning has blended with its Christian meaning over the centuries in Celtic Christianity, and enriches its traditional Christian symbolism, in my view.

Despite its pagan roots, the hot cross bun became so entrenched as a symbol of English Catholicness that when the Protestants took power they actually banned the bun. It’s probably propaganda from anti-Catholics, but in the early days, it’s possible there was communion wafer flour incorporated into the dough. As with most government attempts to forbid something people want, however, it didn’t last long. A compromise was struck by Queen Elizabeth I, allowing them to be sold, but only during Christmas and Easter.

The fact that the buns are just sweet enough to balance the flavors without tasting sugary makes them seem an appropriate dessert for Lent. And since they’re from England, they have currents, which are less sweet and juicy than raisins and so also seem less decadent. In Australia they sometimes substitute chocolate chips for the currants, so last year I made some that way, but that seriously undermines the not-too-decadent argument. Then again, they were very popular…

They say if you share a hot cross bun, saying, “Half for you and half for me, between us two shall good will be,” it will guarantee the friendship for the coming year. I suspect that’s a self-fulfilling prophesy, but why not play it safe. Share hot cross buns with your friends this Holy Week, and then cherish those friendships and treat them as holy for the coming year! Even if you can’t bake your own, you can buy some. Just avoid the ones with candied fruit, unless you like that sort of thing.

You can see all my Lent-themed pieces together at patheos.com/blogs/philfoxrose/tag/lent/. Please share that link, or one to my blog, with anyone you think might be interested. Thanks! 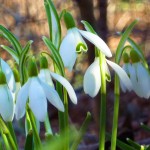